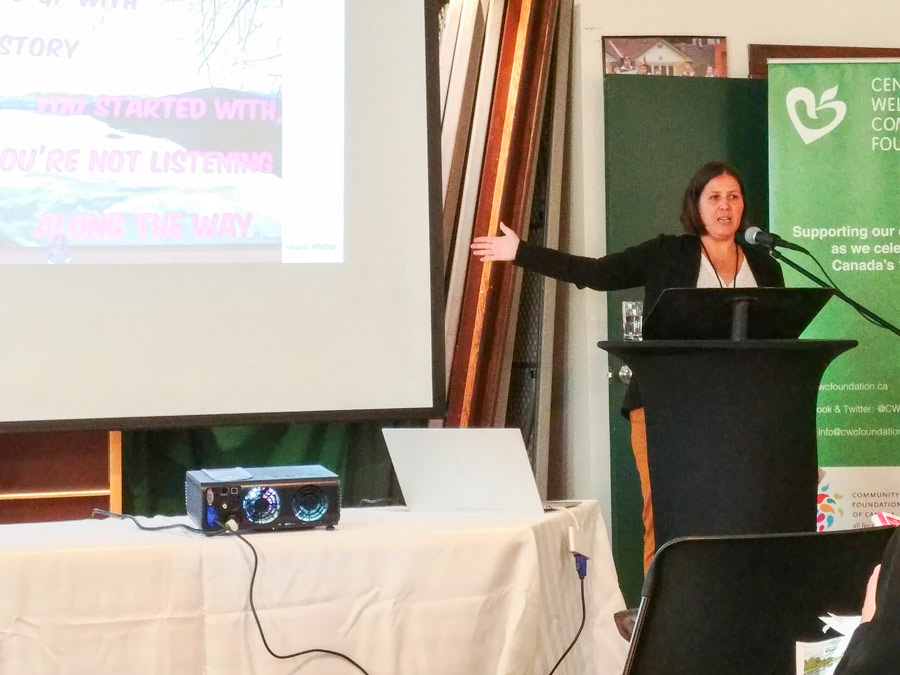 On Oct. 1, the venue was packed with stakeholders and community members waiting to hear about the latest report from the Centre Wellington Community Foundation (CWCF).

“We believe our Vital Signs report provides a community snapshot that will give the collective ‘us’ a new tool to understand Centre Wellington, which will help achieve our goal of relentlessly pursuing a future where everyone belongs,” said CWCF executive director J. Raymond Soucy.

Vital Signs 2019 consultant and facilitator Erin Pratley explained that much of the report is data driven from national, regional and local sources. The report also comes from stakeholder consultation sessions with 52 local representatives from various organizations, a leadership advisory group and discussions with other stakeholders.

The third source of information is a community survey that generated 573 respondents, including 89 that identified as youths.

The three new areas of focus in the 2019 Vital Signs report include: health and wellbeing, housing, and environment.

The statistic that really stuck out to Pratley was the fact that 47% of the people using the Centre Wellington Food Bank don’t have access to a car.

“It links to poverty, it links to housing,” she said. “Where do these people live and if they live in Elora … about a year ago we lost the only grocery store in town, where are you getting your day-to-day groceries from?”

According to the Vital Signs report, the community’s strengths include Groves hospital, primary care physicians and a new hospital to open in 2020. There are also opportunities for active living and organizations to support the most vulnerable.

However, residents must travel outside the community for many healthcare services and there’s a high demand for mental health services.

She highlighted that only 62% of youth feel valued in Centre Wellington.

“How can we do better?” she asked. “Why are they not feeling valued here in Centre Wellington?”

She also highlighted that only 21.9% of Grade 10s had an hour of physical activity every day and 53.7% of Grade 10 students reported low self-esteem.

“If you just look at the relationships there, why are people spending much less time outside and why are more than half of them feeling that they have low self-esteem?” she said.

The vital signs report identifies that the community is “out of balance” when it comes to affordability, suitability and accessibility in housing.

“Our community is shaped by decisions we have made around housing in the past, as well as our current preferences for housing, with less thought to the future housing needs in our community,” the report says.

One of the challenges is there is not enough affordable housing for rent and for purchase.

“It is a challenge for buyers to purchase in our community, especially first-time buyers,” the report states.

“It is also a challenge for renters due to a shortage of rental properties.”

Pratley indicated 25% of the youth surveyed want to live in the community but she wondered where they are going to live.

“It’s housing and belonging and the gap between rich and poor, because if those youth decide maybe they don’t want to own or maybe they can’t afford to own because we do have an affordability issue, can they rent?”

According to the report 41% of renters in Centre Wellington are spending more that 30% of their income on housing, indicating that they have a “housing affordability” problem.

The report noted natural environment is important to Centre Wellington.

However, some of the challenges are external threats like climate changes and “the purchase of a local well,” the report states.

“The population growth in Centre Wellington stresses our environment and needs to be carefully planned for, from the housing we build, to the ways we get around, the water we use and waste we produce.”

The new report also builds on the 2015 vital signs report which covered three different areas of interest: the gap between rich and poor; belonging and leadership; and arts and culture.

Gap between rich and poor

The most recent vital signs report found the gap between rich and poor has seen little improvement.

“We have not made significant strides to reduce poverty in our community since VS2015,” the report states. “Centre Wellington continues to have lower rates of poverty than the province, but our poverty rates have increased.”

Also, one in 14 seniors and one in 12 children are living in poverty.

It’s this gap between rich and poor that Reverend Ann Turner addressed during a panel discussion at the launch.

“Where the problem and concern lies for me is … in an attitude that … finds Band Aid solutions satisfactory and sees no problem with exporting our most vulnerable to those larger urban centres and that’s what’s happening out there,” Turner said.

“We send our folks to Guelph and Kitchener and to Waterloo rather than finding homemade solutions.”

She said this will be a problem when looking for a workforce because many people have left the area.

“We need to grow up our model of support so that it’s not simply charity … but we find some life changing programs that allow folks to remain in this community and get the assistance they need,” she said.

A common theme throughout the launch was a sense of belonging.

Andrew Chunilall, CEO of Community Foundation Canada, said that belonging is rooted in small towns and communities and it’s as fundamental to humanity as food, water and shelter.

“Social isolation, particularly among seniors, is the largest risk to our robust sense of belonging in Centre Wellington,” Chunilall said. “Belonging is a sense; it can’t be measured, not like food, water or shelter.”

He said too often the focus of studies is on measurements, but belonging can’t be measured.

“The strongest asset in your community isn’t financial resources, it isn’t natural beauty and it isn’t the climate; it’s your unwavering desire to welcome and include everyone so that they have a strong sense of belonging,” he said. “That is your strongest asset.”

However, the report points out there’s still divisions between residents of Elora and Fergus and between long-term residents and newcomers.

“We need greater physical connection between Fergus and Elora,” the report states. “We also need to create more welcoming spaces for newcomers to participate in our community.”

Turner said the community is changing in terms of ethnicity, customs and religions.

“I believe that in the interest of nurturing a healthy and diverse community we need to put our attention into intentionally [meeting and greeting and getting] to know these new neighbours,” she said, adding the community needs to acknowledge the diversity.

“We have to widen the tent, we have to organize and take the time to understand the newness among us and that’s a big challenge,” Turner said. “We have to put down defensiveness, we need to put down possessiveness.”

The last of the items to be re-examined after the 2015 vital signs report is arts and culture.

The report identifies the most notable change as “the increase in collaboration among organizations and the extent to which they are engaging with broader community issues.”

The report is now available to the public and included in this week’s Wellington Advertiser and online at cwcfoundation.ca/vital-signs.