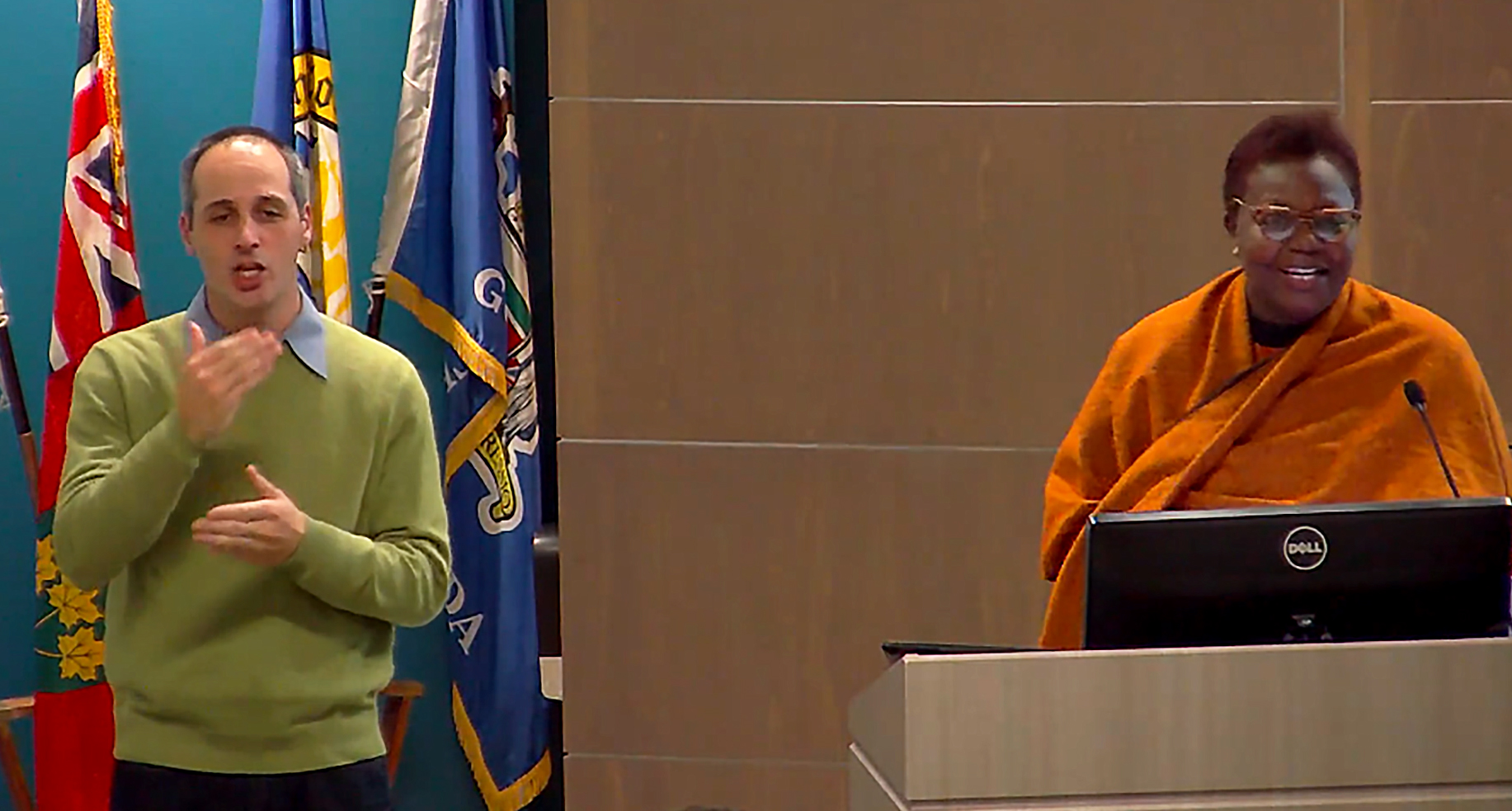 GUELPH – Police are ill equipped to meet the needs of children and teens struggling in schools and teens may be missing out on the support they need.

That was the number one thought shared during a virtual town hall on police presence in schools hosted by the Upper Grand District School Board (UGDSB).

Despite some technical glitches, about 140 people took part in the Oct. 20 meeting, the result of a June directive by the board of trustees to create a Police Presence in Schools task force review committee.

“These requests were made as a result of world-wide attention on racial injustices and questions trustees received about the role of policing in the Upper Grand District School Board from community leaders, community groups, and individuals from across the board,” said superintendent and committee co-chair Cheryl Van Ooteghem.

The committee consists of two trustees, one student trustee, three staff members and eight community members from across the UGDSB catchment area. Student input is also being included.

“Based on information gathered and your input tonight the committee will produce a report and provide options and recommendations to [UGDSB] trustees who will make a decision about police presence in schools,” Van Ooteghem said.

“It is important to the Upper Grand District School Board trustees and staff that a safe venue be provided to confidentially hear all voices, ideas and opinions without bias or oppression.

“Tonight is the forum in which we will have that community conversation.”

The school board used a program called Thought Exchange to anonymously gather input from participants.

Each participant was asked to answer the identified question with one or two thoughts and then rate at least 15 more.

While organizers only shared the top reviewed responses at the meeting, all input will be considered in the final report to the board of trustees, they said.

The first question asked for thoughts on the role and impact of police presence in the UGDSB community. About 140 participants shared thoughts for this question.

In addition to the top response that police are inherently ill equipped to meet the needs of students, participants also thought the VIP program is appropriate in elementary school for students to learn about drugs and influences of their peers.

Others said schools are supposed to feel safe and nurturing, with staff setting students up for success.

Yet not all students feel safer with police in schools and some feel the opposite, due to personal experience.

Still others said they didn’t think police are necessary in schools.

“While police are community partners, their everyday presence can be triggering; some students may also feel targeted,” one respondent said.

The committee also asked for additional feedback for the task force going forward. About 120 participants responded to this question.

The top response was to ensure the BIPOC (Black, Indigenous, People of Colour) lived experience is considered because their voices are often dismissed or silenced.

“Students deserve mental health professionals and trained educators to teach them about drug use and safety,” one respondent said.

Another top request was that the task force to continue to accept feedback to ensure changes consider all perspectives of UGDSB families.

“Be comfortable with not deciding based on majority,” another respondent said.

“If there is a group of people who do not feel safe with police presence in schools that should not be discounted. Do not ignore the marginalized.”

“Black, Indigenous, People of Colour community needs to be included in conversations so their perspective is understood,” the same respondent said.

“The getting to know part of police in schools should go both ways. Police should be learning about diversity and acceptance from the students, too.”

Another top response was that school resource officers should not carry guns because it may be scary or intimidating for students.

Some of the questions asked include:

“Our team, our committee, the task force, came up with these questions because we want to make sure that when we deliberate on all of the information you have provided to us that it is well rounded with not only data, but additional information from the police services that service our district,” Wisdom said.

Community members unable to participate in the town hall can complete a survey and answer the same questions here until Oct. 26.

The UGDSB community can also reach out to the task force at policeinschools@ugdsb.on.ca and more information can be found at www.ugdsb.ca.

The Police Presence in Schools task force committee is to make a presentation to the UGDSB prior to Dec. 31.