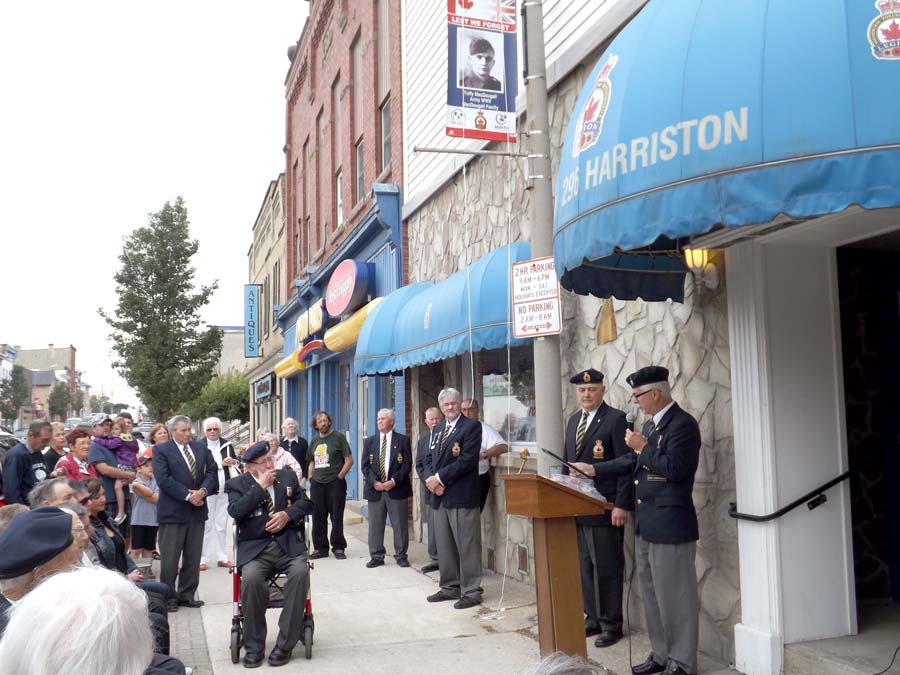 HARRISTON – With Remembrance Day fast approaching, many communities will be displaying and honouring veterans with colourful banners on street lamp posts.

In this area, the “Salute a Veteran” program was first launched by the Harriston Legion Branch 296 in 2014, based on a program initiated in New Brunswick. A banner commemorating one of the town’s best-known veterans, Donald “Tuffy” MacDougall, was unveiled at a 75th anniversary celebration for Harriston Legion Branch 296 on Aug. 16. A total of 15 banners were raised that first year.

Branch 296 member Gary Thackary said the banners are raised, “for the benefit of the community and respect for those who gave for our country.”

Thackary notes the local branch has received positive comments on the banners, both from local residents and across the country, including:

– “A face and a name put together, become meaningful”;

– “There are so many people who are so proud to be able to honour a family veteran”;

– “It is our absolute duty to do everything we can for our veterans”; and

– “These were not trained soldiers. They were not in the military in most cases, they volunteered and we need to keep being reminded of that.”

As of this year the Town of Minto will be displaying 126 veteran banners in the communities of Clifford, Palmerston and Harriston. 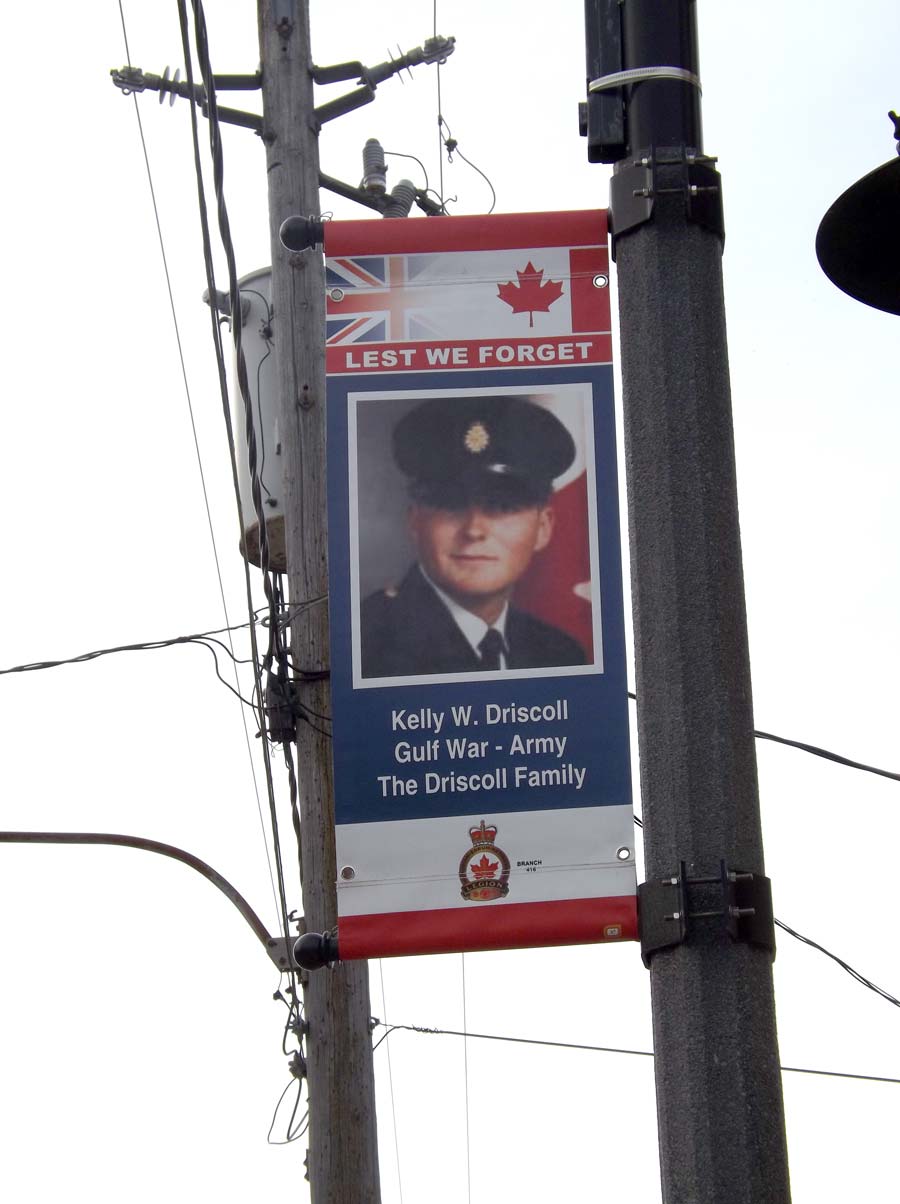 A banner in Drayton raised in memory of Gulf War veteran Kelly Driscoll.

Thackary pointed out that although they have been on display in Harriston for six years, with very little or no repair work needed, the  life expectancy of the banners is not known.

“Weather conditions will decide that probably,” he commented.

Each year when the banners are taken down, they are cleaned, dried and stored at the Legion. Later, after Christmas, they are displayed on the walls of the branch.

In the local program’s inaugural year, “the Harriston Legion was fortunate to have four living veterans and all were able to view their banners outside on display,” said Thackary.

The banners used locally are designed and supplied by an area company, Hanover-based OnePromo. After the launch in Harriston, owner Dan Bailey said  the company contacted other Legions across the country, and have now supplied in excess of 1,000 banners, nation-wide. Legions in Nova Scotia, Newfoundland, Manitoba, Alberta, British Columbia and Ontario have received banners from OnePromo and  other organizations such as libraries, museums, service clubs, as well as individuals are also placing orders.

Later this year, OnePromo will be making a donation of $5,000 to the Homeless Veteran Program. The banner cost incorporates $10 from each one, to go to this program.

In Wellington County, the program has been adopted by Legions  in Arthur, Mount Forest, Erin and Drayton. Other southwestern Ontario communities including Listowel, Howick, Port Hope, Clinton, Collingwood, Saugeen Shores, Elmira, Ripley, Mitchell, Blenheim and London now also line their streets with banners in memory of their veterans.

While the Harriston Legion Salute a Veteran program recognizes the sacrifice made by many members of the community, Thackery notes media exposure and and OnePromo “took it one step further, to the next level, coast to coast.”