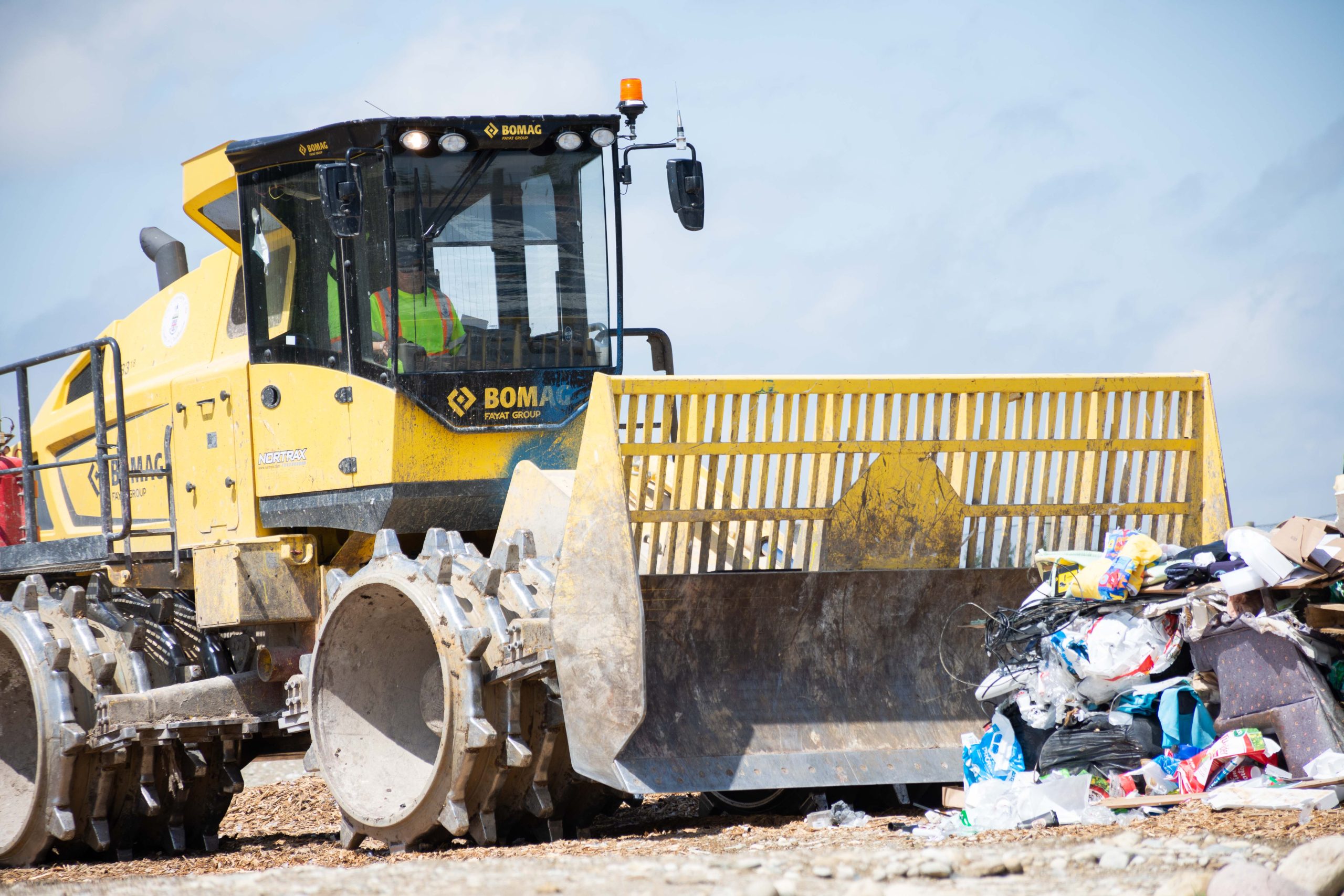 Wellington County's Riverstown Landfill has officially entered a second phase with the opening of a new cell on May 19. Phase two, with four cells, is expected to last until 2047. Wayne Phillips operates a crusher in the newly opened cell. Photo by Jordan Snobelen

WELLINGTON NORTH – A newly opened space at the Riverstown Landfill site is no ordinary hole in the ground.

Two ceremonial truckloads of trash spilled into the new cell on May 19, marking the official opening of a second phase at the county’s only landfill.

At the base of the pit, officials snapping selfies had yet to catch a whiff of the freshly spread garbage being warmed by a mid-day sun.

County waste services committee chair and Mapleton Mayor Gregg Davidson opened with remarks against a backdrop of heavy machinery, lauding the “monumental” forward thinking of county staff and past and current councils, noting a new landfill hadn’t been opened in the province in more than two decades. 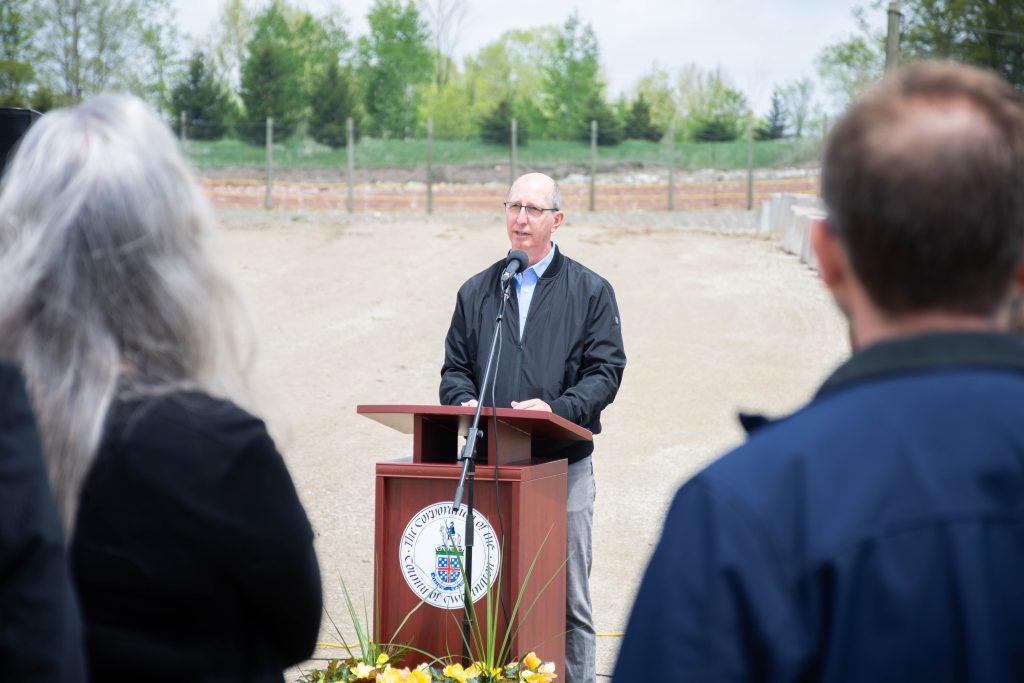 Wellington County solid waste services committee chair and Mapleton Mayor Gregg Davidson speaks at the opening of a second phase and a new cell at the Riverstown Landfill on May 19 in Wellington North. Photo by Jordan Snobelen

Piles of smelly, discarded waste wouldn’t typically be a cause for celebration, but the project has been a long time coming.

Some municipalities don’t own a landfill and must truck waste out using private services, or spend jaw-dropping money to acquire a site.

Speaking to the Advertiser following remarks from elected officials and staff, Soligo said the landfill is a “source of pride” for the county.

“We can manage [the] landfill in our own backyard, in our own municipality, and don’t have to rely on others,” he said. 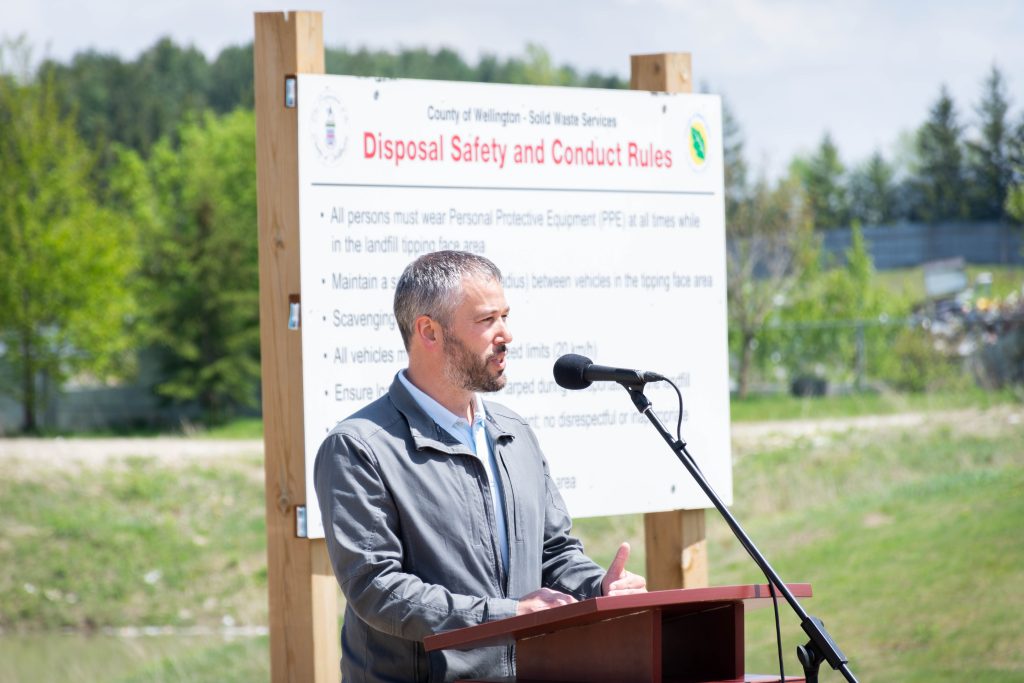 Wellington County manager of solid waste services Das Soligo speaks at the opening of a second phase and a new cell at the Riverstown Landfill on May 19 in Wellington North. Photo by Jordan Snobelen

Eventually there will be four cells in total making up the second-phase expansion, anticipated to support residents’ waste until 2047.

The cost of the phase-two development, including all the cells, rings in at about $4.6 million.

It’s forecasted to take between four and five years for garbage in the newly opened cell to pile up to 15 feet high.

At that point, a second cell will be opened up adjacent to the first. 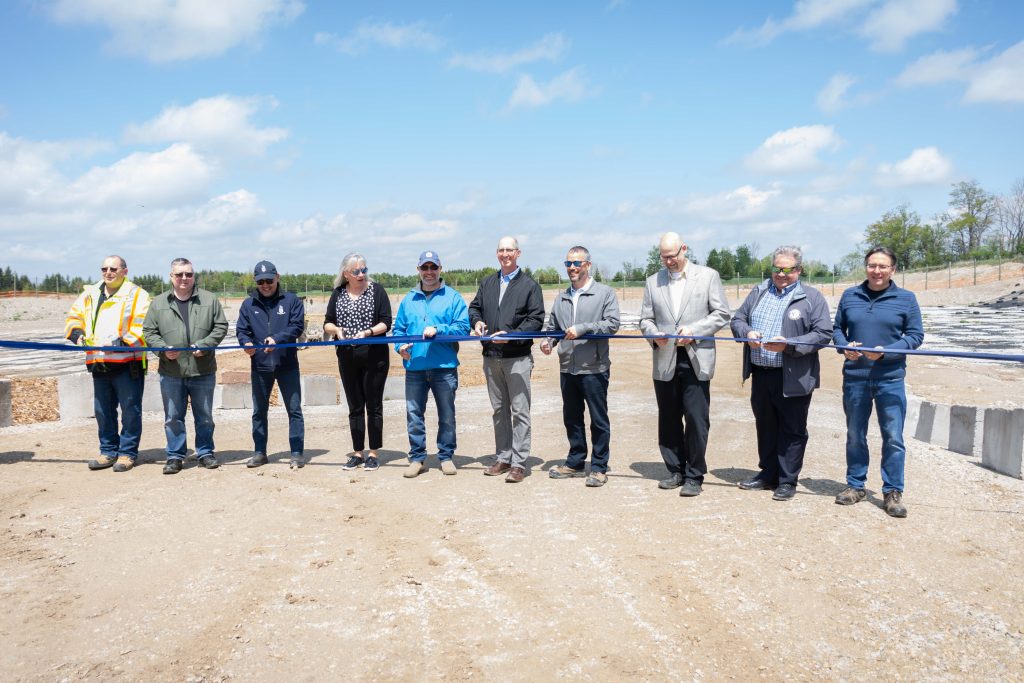 Once garbage piles up there, a third cell, and finally a fourth, will be opened, with garbage drop off rotating through the cells in such a way until the 691,000 cubic-metre capacity of all four cells is reached, Soligo explained.

By then, garbage will be piled about 45 feet high.

The new cell is the first in the county to be engineered – meaning it’s not just a hole filled with garbage, as landfill sites historically have been.

At base level, impermeable clay provides a natural bottom liner, preventing the leaching of dirty liquid into the water table below.

Above sits a permeable membrane of synthetic fibre known as geotextile. Gravel is layered atop that, and another geotextile layer is added. 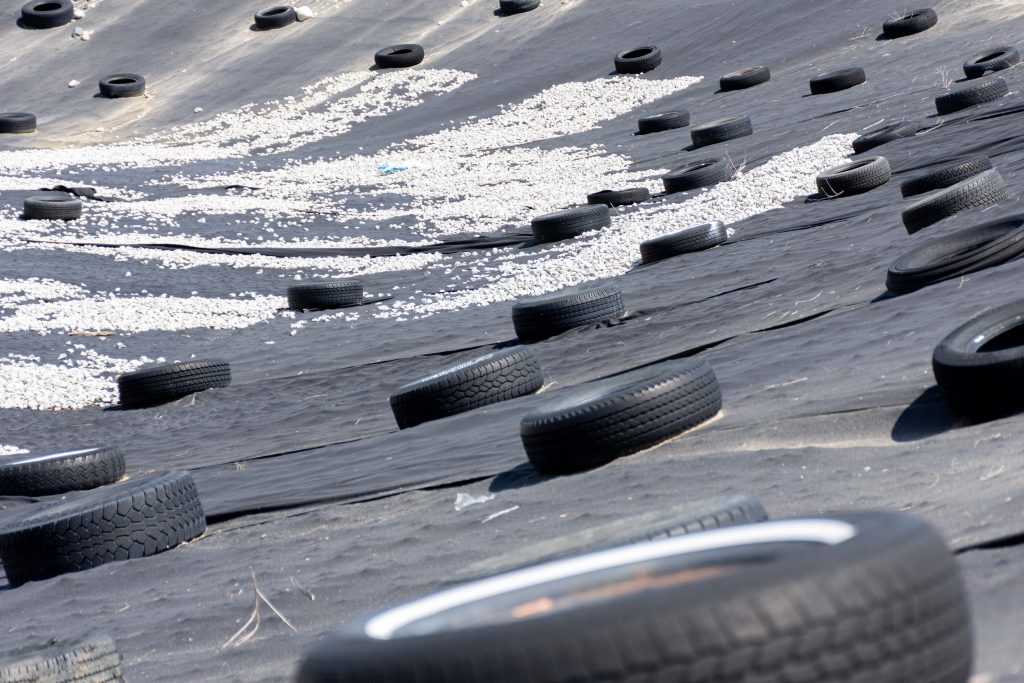 Tires and gravel weigh down a geotextile fabric covering a layer of gravel beneath at a newly opened cell at the Riverstown Landfill site on May 19. Photo by Jordan Snobelen

Leachate – liquid residue from decomposing waste – will be collected in pipes, preventing runoff into the water table.

Soligo said it’s too early to know exactly how the leachate will be handled long-term.

“We’re looking into our options and assessing costs,” he said, adding a consultant report would be forthcoming.

In the interim, the county is permitted by the province to release collected leachate into stormwater retention ponds on site, provided it meets testing thresholds.

If the leachate isn’t up to standard, Soligo said it will be pumped over to the landfill’s phase one section, where there is water monitoring capability. 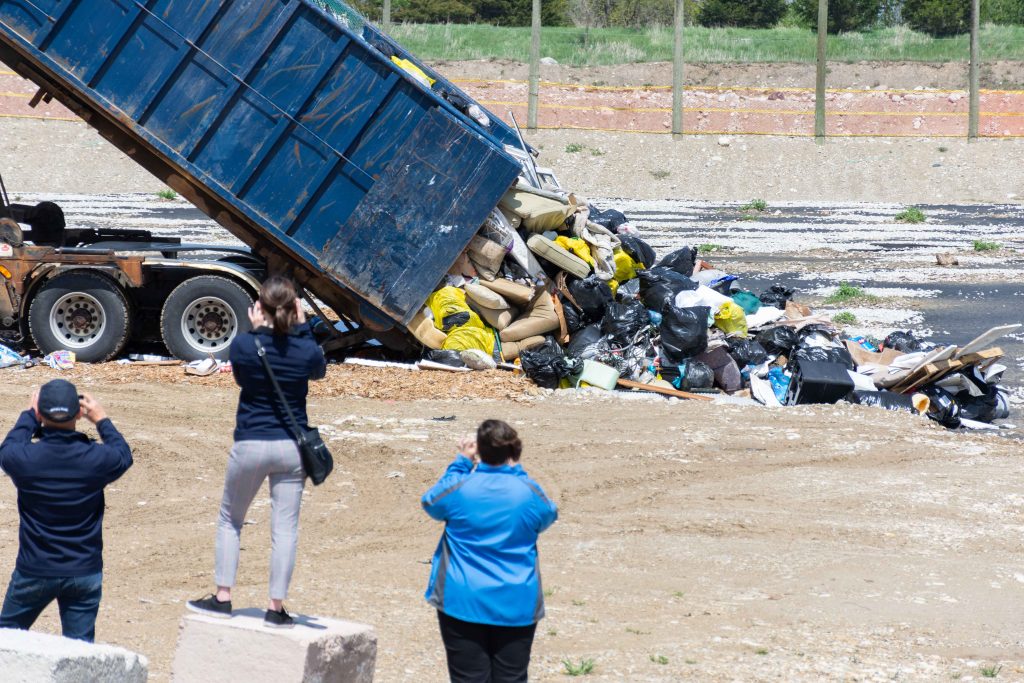 County staff snap photos of the first loads of garbage being spilled into a newly opened cell at the Riverstown Landfill on May 19. Photo by Jordan Snobelen

Soligo said in an email that leachate mainly comes from the breakdown of organic material, and with green bin and yard waste diversion programs now running, “there will be very little organic material being disposed of in the landfill” reducing the amount generated throughout the site’s lifetime.

The county opted in 2018 to examine opening a third phase at Riverstown once phase two cells reach capacity.