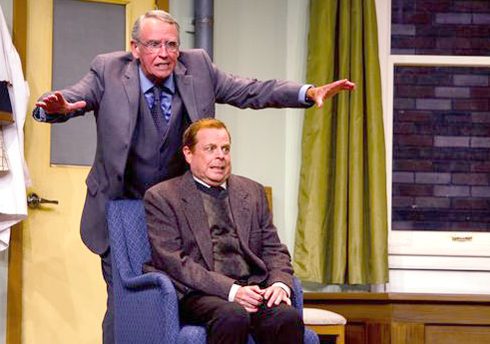 Rob McClure and Eddie Glen star in It Runs in the Family, now on stage at the Hamilton Family Theatre in Cambridge. Photo by Darlene O’Rourke.

CAMBRIDGE – It Runs in the Family, Drayton Entertainment’s latest stage offering at the Hamilton Family Theatre in Cambridge, is a classic British farce with all the requisite comedic elements in place.

The action, set in a hospital, revolves around seasoned physician Dr. David Mortimore as he prepares to deliver a prestigious lecture to a room full of visiting neurologists. His plans are complicated by the appearance of a long-ago lover with life-altering news and his efforts to keep the information from his ex-wife and various hospital and legal authorities, while keeping the antics of a zany cast of characters under control, or at least out of sight.

Drayton Entertainment artistic director Alex Mustakas directs this outing and has assembled a cast that is more than up to the challenges offered by this demanding theatrical genre. Despite the existence of some out dated comedic conventions in the 35-year-old script (Is it funny in 2022 to see a wheelchair-bound patient repeatedly slammed into a cupboard?), the show is a fast-paced, high-energy romp that generated plenty of laughs and a standing ovation from the opening night audience on Aug. 12.

Veteran actors Rob McClure, who plays Dr Mortimore, and Eddie Glen, as Dr. Hubert Bonney, carry much of the comedic load in this production. Glen, as  Mortimore’s loyal friend who gets reluctantly drawn into his co-worker’s web of deceit, steals numerous scenes with his comic aplomb and impeccable timing.

Keith Savage, a mainstay of many Drayton comedies, brings a zany energy to his role as a dazed and confused patient, while Amanda Leigh, as a nurse who had a fling with Dr. Mortimore, and Patricia Vanstone, as the philandering physican’s wife, also give strong turns in key roles. Ben Skipper gives a manic portrayal of Leslie Tate, the troubled offspring of the illicit union, while Aaron Walpole is suitably officious in the role of a police officer tasked with sorting out fact from fiction as the plot thickens.

Patrick R. Brown provides a perfect foil for the cast of crazies as an exasperated hospital executive and Teddy Moynihan, Mary Kelly and Laurel Brown all give strong performances in small, but vital, roles.

The simple, open set by designer David Antscherl provides plenty of room for the show’s many action scenes and the costuming by Jessica Pembleton allows this vintage play to pass as contemporary.

It Runs in the Family is on stage until Aug. 28 at the Hamilton Family Theatre in Cambridge. Regular performance tickets are $53 for adults, $32 for youth under 20 and $43 for groups of 20 or more and select discount dates. HST is applicable to all ticket prices.