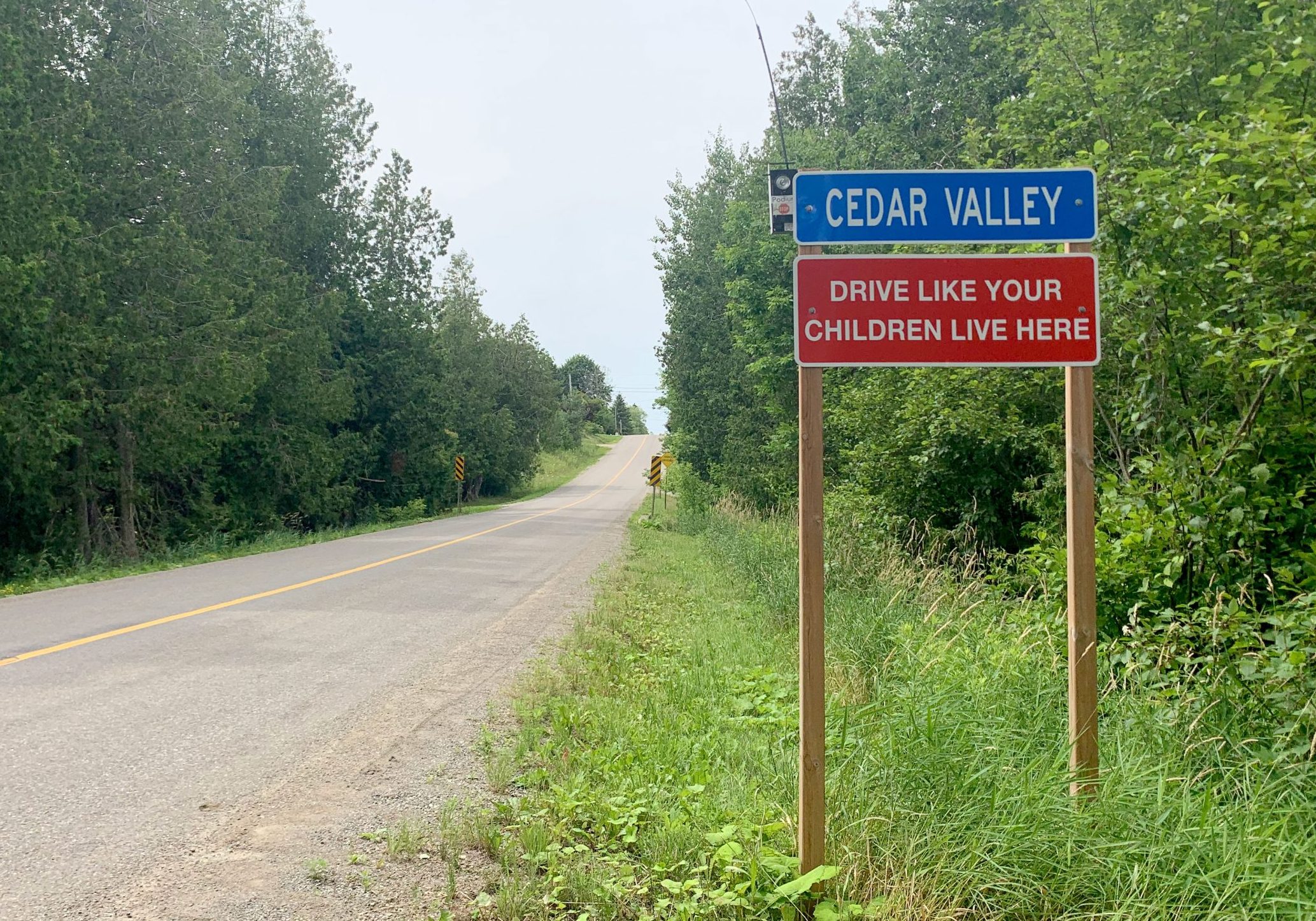 Residents of Cedar Valley are calling on the Town of Erin for more tangible action to help address speeding concerns along 5th Line west of Hillsburgh. Photo by Paige Peacock

Currently speed signs in the area indicate a speed limit of 40km/h, but according to residents the limit is ignored by most drivers.

Letters of concern have been written and presented to the town by former residents who have since moved.

Signs reading “Drive like your children live here” line the lawns of residences along 5th Line.

The road was paved in 2019 to accommodate a higher quality alternate route for Cedar Valley residents to access Wellington Road 22 during the reconstruction of the Hillsburgh bridge and dam.

Resident Marlene Kawalez said since the road was paved, the community has seen an increase in speeding and danger to pedestrians.

“It’s been a long time since we met with the mayor and the situation,” she explained.

“Since they paved the road and put that yellow line down it, the speeders have gone faster than ever before and there are more speeders.

Kawalez added, “You just have to spend a day sitting here, especially in the mornings and in the later afternoons, but then that’s not even true because sometimes at two o’clock in the morning you can hear it as well.”

Two years have passed since a delegation appeared before Town of Erin council requesting solutions to combat speeding and dangerous driving, including speed bumps and larger signs with lighting and radar.

In May of 2019, David Sue and Kawalez appeared before council with a petition of concern, requesting a range of measures to combat speeding, dangerous driving and improve road safety.

The delegation resulted in a total of $300 spent on signs designed to slow the speed of drivers on 5h Line through Cedar Valley, which Kawalez said hasn’t mitigated the issue.

“I can’t see any other way of making people slow down other than speed bumps,” Kawalez explained. “They’re not looking at these signs.”

Kawalez said she’s reached out to the mayor directly to raise concerns but she feels she hasn’t received a concrete response.

“After corresponding with him and basically feeling as though I had a pat on the head, basically, and brushed off – that’s what it felt like and it looks like nothing will be done,” she said.

Kawalez added residents have made several calls over the course of the past two years to the OPP, but police only stop drivers for a short time before they’re back at it.

“A lot of the roads around here are dirt roads. If you’re in a rush, you’re going to go down the paved road.”

Jack Wendolowski, who has lived on 5th Line for nearly 20 years, said it’s too dangerous for him and his parents to walk their dogs since the road was paved.

“We’ve been in Cedar Valley for many years and before the pavement was put in, we were walking our dogs every evening on the road, but we can’t do that anymore,” he explained.

A primary concern for the Wendolowski family is the steep drop into the ditch on either side of the road bordering the pavement, making it impossible to stay a safe distance from the road.

“Because it’s been paved there’s now speeding cars coming by and people not slowing down and there’s no space to escape them so basically this puts essentially everybody walking in danger,” he said.

“They have that 40 sign at the beginning of (the street) but it’s not like most people oblige.”

Wendolowski said his parents are now stuck walking the dog on the property, especially at night due to the absence of streetlights.

Agnes Okula, one of the many residents who signed the petition that was brought to council in 2019, shares several of the same concerns as Wendolowski and Kawalez.

“I think the speed bumps is the only solution,” she explained.

“From the beginning we wanted to put the speed bumps in, even in front of our property.”

Okula has resided in Cedar Valley for over five years with her two children, including a six-year-old, which Okula explained concerns her.

“She has a friend, her age, across the street and they run around the street every day,” she said.

“So, this is the problem with the speeding and the cars not slowing down.”

Okula has put signs out on her lawn, which fronts onto 5th Line, that read “kids at play” and “slow down,” but she’s not sure if drivers even notice them.

“It is a problem, especially in the rural area; you think that people would actually slow down, but it’s the opposite,” she explained.

In an email statement, Mayor Allan Alls said the town has been actively looking at different solutions to address speeding concerns.

Alls added the town is currently investigating the use of temporary speed bumps and traffic calming signs that could be also be used on a rotating basis.

“There has been suggestion of permanent speed bumps from residents, however these can potentially be dangerous, specifically during winter months, and they not only slow down passenger vehicles but also emergency responders,” he noted in his response.

Alls said because police are in charge of speeding issues, the town has brought its concerns to the OPP Traffic Management Unit for study and appropriate resource implementation.