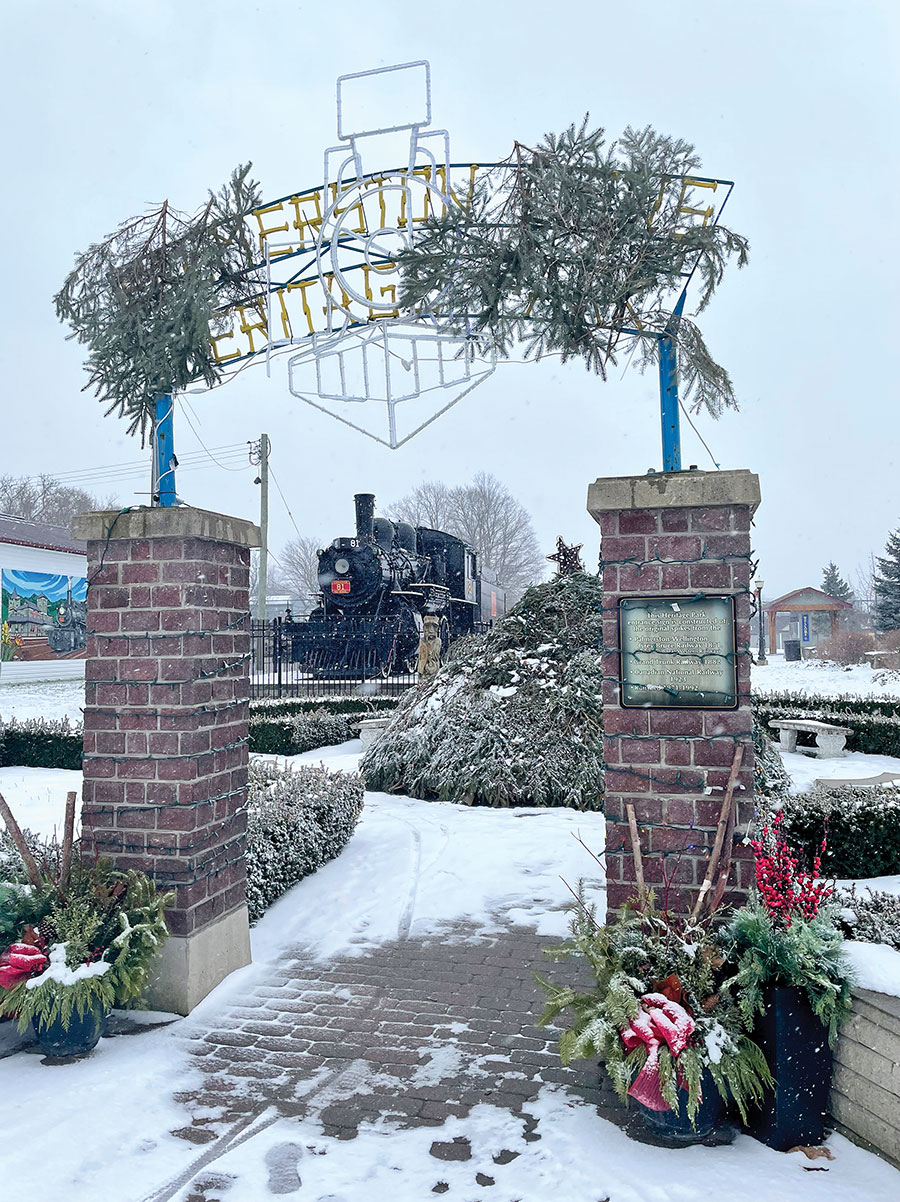 Vandalism - A Christmas tree arrangement, seen beyond an archway leading into the Palmerston Lions Heritage Park, was torched by unknown vandals on two recent occasions. Photo by Patrick Raftis

MINTO – The Palmerston Lions Heritage Park has once again been subjected to vandalism in a recent spate of incidents leading up to Christmas and into the new year.

This past summer the park’s waterfall feature was damaged, a gas can was stolen from a shed, and in the past, pavilion soffits have been damaged, lights torn or cut down from the park’s bridge, wires harvested for copper, graffiti sprayed on the pavilion’s washroom doors, trees uprooted or ripped apart, litter strewn about, broken glass has covered walking paths and basketball court lighting was smashed.

The catalogue of damage handed down by vandals is becoming more than a mere annoyance for Lions Club volunteers who dutifully pick up the pieces and repeatedly repair the ruins.

Lions Club member and councillor Ron Elliott jokes that he’s the “keeper of the park.”

His residence backs onto the greenspace and everyone in the surrounding neighbourhood seems to know who Elliott is, knocking on his door at all hours of the night to report suspicious activity.

Elliott has lived in Palmerston since 1972, when trains still rumbled through the area. Over the last four years, he says the vandalism problem has worsened and become increasingly reckless.

The wanton destruction heated up after a fountain adorned in evergreen branches and decorated with lights to construct a Christmas tree was set ablaze before Christmas.

“Somebody lit fire to the bows that were covering it, burnt the wires … it was about three feet high, two feet wide where it burnt a big hole,” Elliott said.

Club members aren’t resigned to letting the damage linger for someone’s enjoyment – they got to work replacing the damage and re-stringing the lights.

But in the early morning hours of Boxing Day, another fire was lit.

“The tree mount was burnt right from bottom to top,” Elliott recalled.

The Advertiser asked Chris Harrow, director of fire services for Minto and Wellington North, about the fires but Harrow declined to answer questions, including how many times the department has responded to the park.

Harrow said the department was working with Wellington OPP to draft a press release on past park incidents but said he wasn’t sure what details would be addressed in the release.

The Advertiser reached out to Wellington OPP media staffer Joshua Cunningham who was unable to provide responses to similar questions about past incidents.

A press release was not provided and the newspaper’s questions remained unanswered as of publishing.

Elliott called around to local businesses following the fires asking for security camera footage that may have picked up something. No luck there.

The latest incident at the park, according to Elliott, occurred on Jan. 3.

A neighbour knocked on his door around 4am saying somebody had broken into the club’s building adjacent to a pavilion.

“There was no damage and we locked it back up again,” Elliott said.

“We’re lucky because people take pride in our community; that’s how we find out about these things,” Elliott said, appreciative of the “goodness of people.”

Despite his optimism, the recurring damage is discouraging to club members.

“We want to do something new and our Lions Club, it always happens, somebody will say ‘Why would we do that? Someone’s just going to vandalize it,’” Elliott said.

The Lions tried mounting a security camera several years ago but a lack of technical know-how and poor picture quality made the attempt unsuccessful.

“It’s getting to a point where maybe we have to do something,” Elliott said, adding that police are called every time there’s an incident.

Asked what his expectations of Wellington OPP were, Elliott said he wasn’t sure.

“I think they keep a record of my call, maybe; I don’t even know that,” he said.

Asked how the OPP handles vandalism calls, Cunningham explained police can gather photo and video evidence, along with witness statements and said the agency finds value in receiving public tips.

The OPP’s Community Response Unit, launched to replace the now-defunct School Resource Officer program, is making “extra patrols in the area,” according to Cunningham, who did not provide additional detail.

Ultimately, if police track down someone responsible, mischief charges could be laid which have the potential to end with a combination of prison time, a criminal record, fines and probation.

Elliott, also a former mayor of Palmerston, said the situation hasn’t formally been brought to council and suggested doing so would be more appropriate if there is a request for money to cover a security system or to hire a private security company.