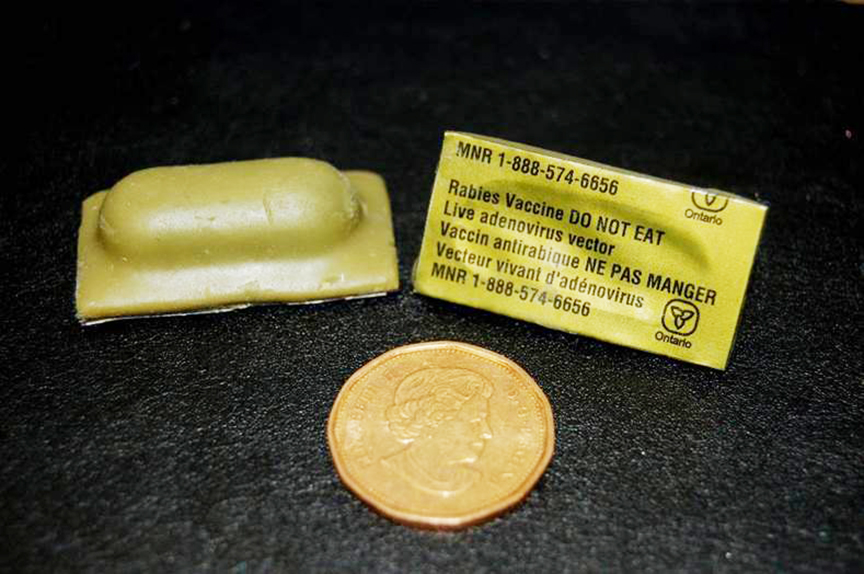 WELLINGTON COUNTY – The province has announced efforts to curb the spread of rabies in wild animals will continue this summer.

The Ministry of Natural Resources and Forestry (MNRF) announced on June 20 that rabies vaccine bait will be dropped soon in targeted areas of the province, including Wellington County.

“Staff will focus on raccoon and skunk habitat, such as bushes, green spaces and ravines where animals may forage, or along fence lines, hedges and large culverts,” states the MNRF press release.

“Baits are not distributed near schools, playgrounds, or where children are likely to be present.

In more rural areas, the ministry will use aircraft to drop bait, starting on Aug. 7.

“Baits help to immunize most raccoons, skunks and foxes that eat them,” officials say.

“Baiting is an important part of our rabies control plan – one of the most successful in North America.”

When animals bite into the bait and swallow the vaccine, they should develop immunity to rabies in about two weeks.

The vaccine is not harmful to people or pets, but anyone who ingests one, or has a pet who does, should contact a doctor or veterinarian as a precaution.

Since 2015, the ministry has distributed over 7.5 million vaccine baits and tested more than 25,000 wildlife samples. As a result, the number of positive cases has dropped by 95 per cent since 2016.

For more information about rabies in Ontario, visit Ontario.ca/rabies or contact the ministry’s rabies information line at 1-888-574-6656.