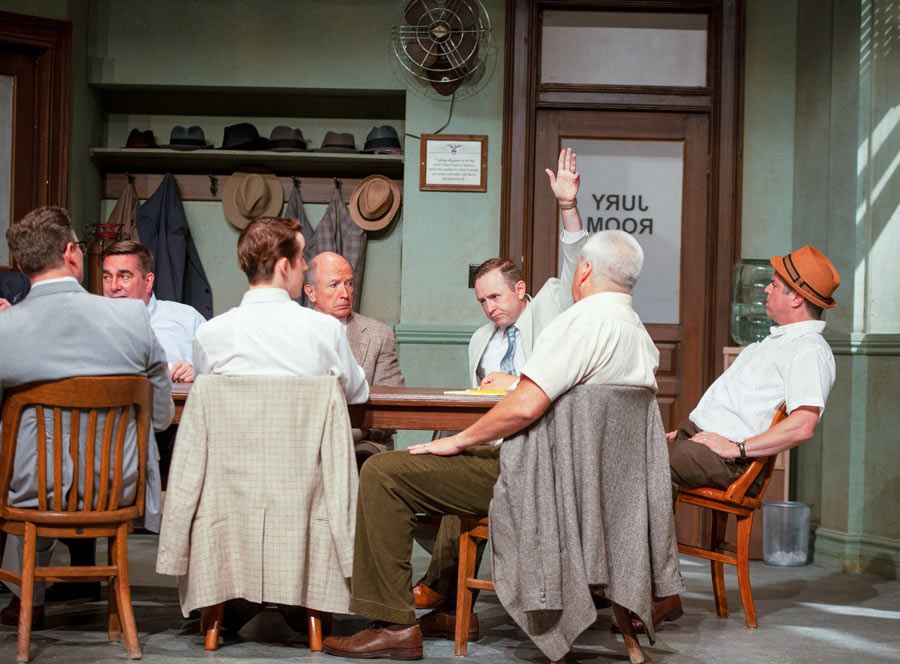 CAMBRIDGE – One of the most gripping stories of all time unfolds on stage, as the courtroom drama Twelve Angry Men examines the complicated quest for justice at the Hamilton Family Theatre in Cambridge.

The story takes place in Manhattan’s Supreme Court on the hottest day of the year in 1957.

Twelve men sequestered in a room must decide whether a Harlem teenager is guilty of the murder of his father, thereby sentencing the young defendant to death.

It looks like an open-and-shut case, but as the dozen men try to reach a unanimous decision, Juror #8 plants the seed of reasonable doubt, thereby preventing a quick verdict … much to the chagrin of his 11 colleagues.

Tempers get short, arguments grow heated and conflict threatens to derail the delicate judicial process as men from all strata of society revisit the evidence, and confront each other’s personal biases.

“It reveals the complexities of the judicial process and exposes how personal biases can profoundly alter perceptions of guilt or innocence. Audiences will not only become absorbed in the facts of the case, but also in how the background of each juror affects his way of thinking.”

Veteran director Marti Maraden helms this world-renowned classic. Maraden’s career includes 18 seasons at the Stratford Festival, eight years as the artistic director of English Theatre for the National Arts Centre, and numerous Drayton Entertainment productions including the acclaimed production of The Miracle Worker earlier this season in St. Jacobs, the stirring drama The Rainmaker, the popular comedy The Birds and The Bees, and 2017’s hit production of Death of a Salesman, starring George Wendt.

An all-star cast featuring some of the most renowned professional actors in the country has been assembled for this production.

As the story’s primary focal point, Skye Brandon takes on the role of nonconformist Juror #8, who is firm in his belief that the jury must look at the situation in a way that is not affected by their preconceived ideas and personal biases.

Brandon previously appeared in Romeo and Juliet, The Three Musketeers, The Matchmaker and Titus Andronicus at the Stratford Festival, as well as in Death of a Salesman for Drayton Entertainment.

Benedict Campbell makes his Drayton Entertainment debut as the aggressive and intolerant Juror #3, who has no sympathy for the defendant and is annoyed when other jurors want to review the evidence.

A distinguished actor, Campbell has appeared on stage for over 40 years with a variety of companies in Canada playing notable roles at the National Arts Centre, the Stratford Festival, and the Shaw Festival, among others.

Brad Rudy causes severe tension among his peers as Juror #10, who, whilst battling a cold, is determined to raise his voice to spew his vehemently bigoted convictions.

Rudy has appeared in 55 productions over 22 seasons at the Stratford Festival, and previously appeared in Priscilla, Queen of the Desert and West Side Story for Drayton Entertainment.

Written by Reginald Rose, Twelve Angry Men began as a teleplay in 1954.

It won three Emmy Awards that year, including Best Writer for Rose.

The 1957 film starring Fonda was nominated for Academy Awards in the categories of Best Director, Best Picture and Best Writing of Adapted Screenplay.

Twelve Angry Men was eventually adapted for the stage by Sherman Sergel in 1964 for a production in London’s West End.

Surprisingly, the show did not debut on Broadway until 50 years later at the Roundabout Theatre Company in 2004.

Regular performance tickets are $48 for adults and $29 for youth under 20 years.

Tickets for select discount dates and groups of 20 or more are $39.

Twelve Angry Men is on stage from Aug. 7 to Aug. 24 at the Hamilton Family Theatre in Cambridge.

Tickets may be purchased in person at any Drayton Entertainment Box Office, by calling the box office at 519-621-8000 and toll free at 1-855-drayton (372-9866) or online instantly at www.draytonentertainment.com.