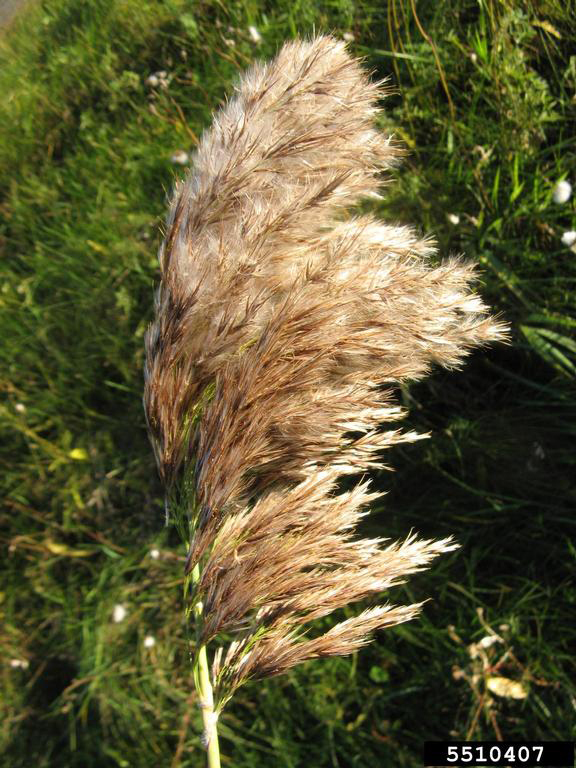 Invasive species - While it looks much like native phragmites, the larger European variety is reported to crowd out local plantlife and is detrimental to local wetlands. Submitted photo

ABERFOYLE – David Pady wants residents to know there is an invasion underway in Puslinch.

On Dec. 4 Pady told Puslinch councillors of the environmental damage being caused by species of phragmites known as the European common reed.

Pady said phragmites, an invasive species, is having a very detrimental effect on wetlands.

According to the Ontario Invading Species Awareness Program website, it “ … is an invasive plant causing damage to Ontario’s biodiversity, wetlands and beaches.”

The site further states “Invasive phragmites is a perennial grass that has been damaging ecosystems in Ontario for decades. It is not clear how it was transported to North America from its native home in Eurasia.

“Invasive phragmites is an aggressive plant that spreads quickly and outcompetes native species for water and nutrients. Further it releases toxins from its roots into the soil to hinder the growth of and kill surrounding plants.”

While it prefers areas of standing water, its roots can grow to extreme lengths, allowing it to survive in relatively dry areas.

Pady told councillors that he’d written the mayor initially to express his concerns.

He added, “Two years ago I didn’t know what phragmites were … I find most people don’t.”

Pady said that according to the Ministry of Natural Resources website, “it is the most invasive species in the province … yet most of us are not aware.”

Pady became aware of the issue when one of the directors at the Donkey Sanctuary asked if his wetland property had a problem.

It was pointed out to him that there was a considerable infestations throughout the township.

Over the past year and a half Pady has undertaken ways to tackle it.

However, it was then Pady noted the township has a no-spray policy. He said that makes the issue difficult to tackle.

Pady said that while it may be a major budget concern, a plan is needed to deal with the invasion.

He stated Ignatius College is dealing with the same invasion at its property.

The college has a no-spray policy which led it to try other approaches.

While Pady said council may want to rethink its no-spray policy, he said the college’s alternative has met with success.

It is something the Donkey Sanctuary is trying out now.

He said the process involves  basically taking big pieces of plywood and putting them on the ground to first flatten the phragmites.

Then, a large used silage tarp is place on top of that to block out any sunlight. These are weighted down with used tires, Pady explained.

He said the tarps are left in place for two years and after that time, the phragmites is gone and the landowner attempts to restore native plants and trees.

Pady said a test is starting this winter at the Donkey Sanctuary.

He recommended contacting all the dairy farmers in the area in an attempt to obtain used silage tarps for recycling.

Pady said if the township does not deal with this, places like Little Lake and Puslinch Lake are at risk.

He said this type of phragmites will dry up the water in the lake.

Further, he said once the phramites displace the native plants, there will be no insects, which in turn affects bird populations.

Seeley asked the manager of public works to comment on the concept of having tarps and used tires in township ditches.

Manager of public works Mike Fowler responded “the aesthetics would not be very nice.”

He also stated that in some of the areas Pady had mentioned, there was not a high concentration of phragmites on the township road allowance.

Fowler was uncertain of the benefit if the work was undertaken on township property if the adjacenet landowner chose not to participate.

He said he believes there needs to be further discussion with private property owners.

At the same time Fowler said he is not opposed to an experiment or trial run by the township.

Councillor John Sepulis asked staff to investigate if any grants are available to deal with this. If there is, Sepulis said landowners should be made aware of it.

He asked for a staff report on funding and partipation in a trial run – including the potential of liability.

Seeley said the report should also speak to the benefits of spraying versus not spraying.

Councillor Matthew Bulmer said there is some confusion in the discussion.

“We have no authority to ban people from spraying their own properties.”

He explained the policy regarding not spraying the roadsides was in regard to broadleaf weed control – not for grasses. But the discussion began because so many residents were putting up “no spray” signs.

He did not have an issue with initating either the experiment process discussed earlier or testing sprays to determine which is the most effective.

Bulmer noted that for any program to be effective, it will need the cooperation of adjacent landowners.