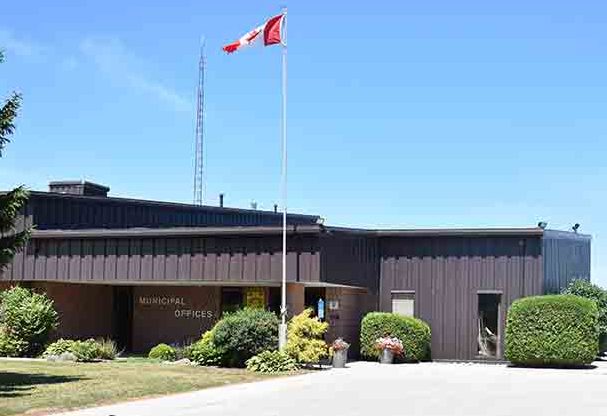 PUSLINCH – With a commenting deadline of April 19 for the province’s Grow the Greenbelt proposal, Puslinch council worked long and hard on March 24 to ensure it covered all the bases in its response.

One of the focus areas of an expanded Greenbelt is the Paris Galt Moraine, which spans from Brant County to Peel Region and locally includes portions of Guelph-Eramosa and Erin and a big chunk of Puslinch.

About 30% of the moraine runs through Puslinch and 75% of the township falls in the study area, so the township would be greatly impacted both by the physical expansion of the Greenbelt and the implications of tighter restrictions on growth, agriculture and aggregate extraction and on the township’s tax base under the Greenbelt policy.

“So, it’s really important that we get this right,” said Mayor James Seeley as council tucked into the work.

Aldo Salis, director of planning and development for Wellington County, attended the meeting at council’s invitation and presented the county’s response to the Grow the Greenbelt plan.

He also offered guidance as councillors crafted the township’s response.

Salis said that since 2005, when the province first established the Greenbelt Plan Area, significant protections have been put into place including:

In addition, Wellington County has established its own protections, including:

And as the growth plan for the City of Guelph does not require extending its boundaries until 2051, there is no immediate threat to the Paris Galt Moraine, Salis said.

“We are trying to understand the rationale for the extension of the Greenbelt,” he told council.

“There are not the same pressures on the Paris Galt Moraine as before. We don’t see the pressure.” 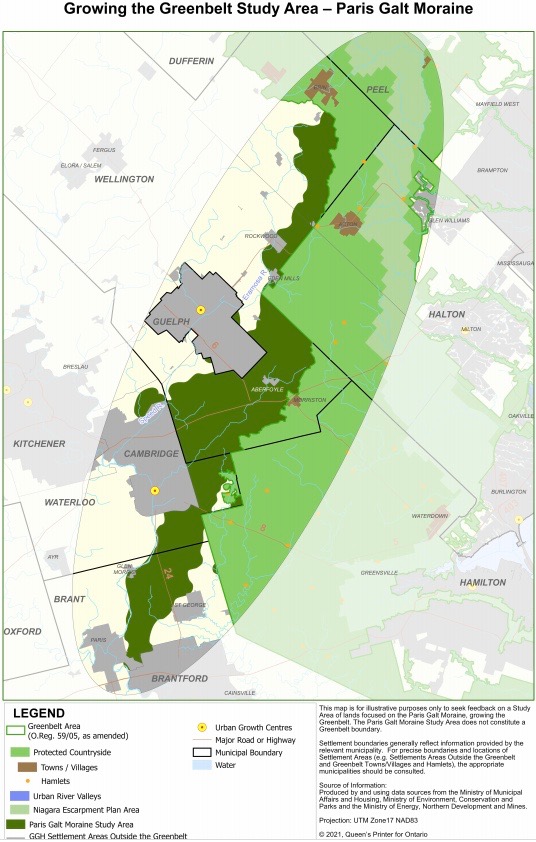 Puslinch council is opposed to the province’s Grow the Greenbelt proposal, notably along the Paris Galt Moraine, which includes portions of Guelph-Eramosa and Erin and a big chunk of Puslinch. (Puslinch agenda image)

At the same time, Wellington County is in the midst of a Municipal Comprehensive Review (MCR) – a process that ensures its Official Plan conforms with provincial growth targets and policies.

It necessitates background research, mapping of natural heritage systems and agricultural lands, and extensive public consultation that could result in changes to the Official Plan.

The MCR is to be complete next year, and the county is requesting that the MCR be completed before the Greenbelt expansion comes into play.

It’s hard to respond to the Greenbelt Plan when the MCR is still in the works, Salis said.

“It’s unclear, the meshing of the two systems,” he noted.

Earlier in the meeting, local resident Mike Marcolongo raised some of his concerns for council’s consideration.

Among them is a clause in Bill 267 that gives the Minister of Municipal Affairs and Housing the power to enact municipal zoning orders (MZOs) that can override council, conservation authority and planning department decisions on development proposals.

“In a hidden quarry-type application, there could be a threat of MZO in the case of Puslinch,” Marcolongo said.

However, comprising such a large portion of the study area “could put Puslinch in the driver’s seat,” he added.

“There may be an opportunity for Puslinch to lead the conversation.”

Councillor John Sepulis felt strongly that Puslinch’s response should be that it is not in favour of expanding the Greenbelt and in the end council agreed.

“It will compromise our ability to sustain ourselves in the future,” he said.

Councillor Jessica Goyda said, “If the Greenbelt doesn’t permit the expansion of hamlets, we’re backed into a corner.

“I’m not saying we don’t want it here, but the MCR process and Official Plan review should be complete before the Greenbelt.”

Mayor James Seeley wanted to ensure that, inside or outside the Greenbelt, future development could take place along the Highway 401 corridor and the planned Morriston bypass.

He also wanted to ensure that secondary units would be allowed on residential properties.

“If that is taken away, it will be a detriment to the community,” Seeley said.

Along with those concerns, council’s comments to the province include:

“At the beginning of this I thought I would be voting against this,” said longtime councillor Matthew Bulmer, who recalled working to have Greenbelt protections originally put in place.

“But thanks to the thoughtful work of council, I can support it.”