ORILLIA – With back-to-school pedestrians and school buses making roads, sidewalks and crosswalks busier, the OPP is urging drivers to pay full attention while behind the wheel.

“Drivers who use their cell phone or are distracted in other ways continue to endanger the lives of people of all ages who share the road with them, be it as a driver, passenger, pedestrian or cyclist,” states acting OPP deputy commissioner Alison Jevons.

“With the new school year [under way], we need all motorists to make a firm commitment to keeping all forms of distraction out of the driver’s seat.”

In 2018, 24 pedestrians were killed in OPP jurisdictions, with inattentive driving being the primary cause of seven of the deaths. So far this year, there have been 21 pedestrian deaths, two of which were caused by motorists who were not fully focused on driving.

The OPP investigated 304 school bus collisions last year, 76 of which were attributed to motorists or school bus drivers who were engaged in some form of distraction.

There have been 158 school bus collisions so far in 2019, with 37 of the incidents linked to motorists or school bus drivers who failed to give driving their undivided attention.

“Protect your family, friends and other drivers by keeping your eyes on the road at all times, be mindful behind the wheel and avoid distracted driving behaviours such as texting,” states Solicitor General Sylvia Jones.

The OPP is reminding passengers they are never safe in a vehicle with a driver who is texting or talking on their cell phone. Police say passengers can help save lives by adopting a “no cell phone use” policy with all drivers.

In 2018, the OPP laid more than 180 charges against drivers for failing to stop for school buses.

As of Jan. 1, new distracted driving penalties include a fine increase up to $1,000, three demerit points and a three-day licence suspension.

FERGUS – On Aug. 22, at about 12:10pm, the OPP responded to a shoplifting incident at a business on Tower Street here.

Police say a suspect walked into the store and directly to the boot department. 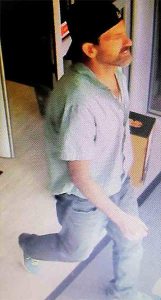 “The male suspect picked up a box containing a pair of men’s size 10.5, black, Timberland Boondock boots and proceeded to walk out of the store with the box under his arm,” police stated in a press release.

“He made no attempt to pay and ignored an employee who was speaking with him.”

The suspect in the surveillance photo above is described as a caucasian male with a short beard in his late 30s or early 40s, about  5’7” or 5’8” tall, with a slim build. He was  last seen wearing a black baseball cap, blue button-down shirt, blue jeans and bright blue running shoes with lime green laces.

“OPP would like to remind you that when someone shoplifts we are all affected,” police stated.

“Retailers account for those losses in their prices. It leaves honest customers ‘paying the bill for those who steal’. If you suspect someone is selling stolen property contact police or Crime Stoppers or we’ll all be paying for it.”