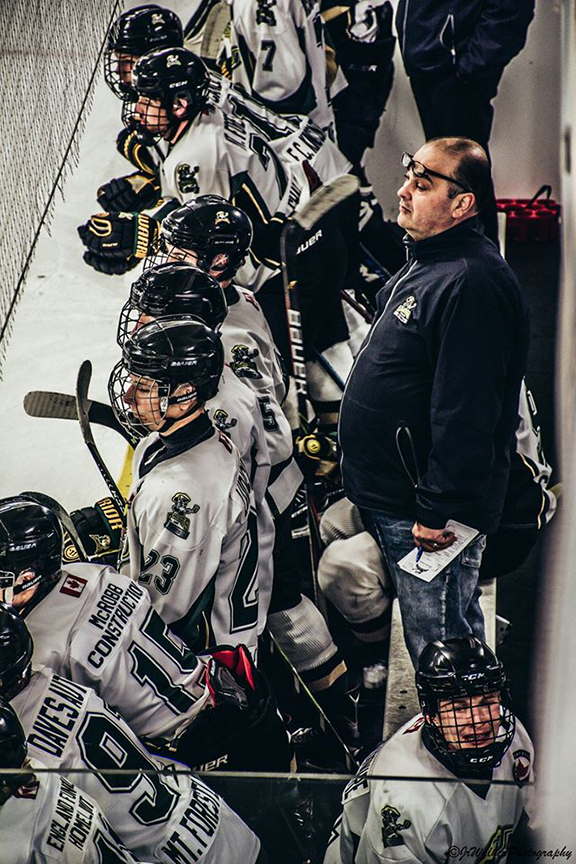 Record breakers - With a win in their final game over the Mitchell Hawks, the 2019-20 Mount Forest Patriots have broken the team record for regular season wins.
Submitted photo

MOUNT FOREST – It’s been a record-breaking regular season for the Mount Forest Patriots.

With the team’s final regular season win against Mitchell on Feb. 2, the Patriots have broken their all-time team record with 33 wins, eight losses and one tie this season.

The Mount Forest Patriots kept Goderich off the scoreboard on Jan. 28 as they earned a 7-0 win.

Patriot Ryley Cribbin began a series of goals early in the first period on a power play, assisted by Troy Weber and Mason Kameka.

Next Weber scored on another power play assisted by Cribbin and Parker Miller.

In the second, Nathan Bolger, unassisted, earned the Patriots’ third goal of the game.

In the third period, Jenkins, assisted by Jack Birkett and Bolger, brought in yet another goal, followed by goals by Butchart, assisted by Derek Williams and Cribbin, and the final goal by Michael Anselmini, assisted by Parker Miller and Hayden Coulter.

On Jan. 31, the Patriots lost 3-0 to the Kincardine Bulldogs.

Kincardine goals were scored in the first period by Tyler Sutter, assisted by Brady Stewart and Cameron Hoskins, and by Geoffry VandenBoorn, from Bryce McFadden and Jake Fair. In the second period Logan Freiburger scored, assisted by Mike Fiegehen and Logan Swanton.

Neither team scored in the third period.

The Patriots came in with a 6-3 win over the Mitchell Hawks on Feb. 1.

The Patriots scored the first four goals of the game.

Less than two minutes into the game, Chet Philips scored on a powerplay, assisted by Cribbin and Colton Culbert.

Next up Michael Stefanelli scored on a shorthanded, unassisted shot to the net.

Cribbin, assisted by Coulter and Butchart, came in with the next goal.

The Patriots’ fourth goal was by Birkett on a powerplay, assisted by Stefanelli and  Cribbin.

In the second, Mitchell’s Jarett Bogdon, assisted by Jake Finlayson, brought the Hawks to the scoreboard 33 seconds in.

Bogdon then added a powerplay goal, assisted by Jake Finlayson and Spencer Dowd.

In the third period, Culbert, assisted by Blair Jenkins and Cribbin, put the Patriots up 5-2.

Next Bolger scored on an empty net, assisted by Miller and Anselmini.

In a follow-up game against Mitchell on Feb. 2, the Patriots once more defeated the Hawks.

Next up Birkett scored for the Patriots, assisted by Coulter and Culbert.

Mitchell scored next with a goal by Josh Gottfried, assisted by Carter Lewis and Spencer Dowd.

Mount Forest recaptured its lead in the second with another goal by Birkett, this time assisted by Jenkins and Williams.

In the third, Mitchell’s Gottfried earned his second goal of the game, this time assisted by Ethan Hill and Carter Lewis.

The game’s final goal was by Birkett, unassisted on an empty net.

The team ends the season  first overall in the Pollock Division of the Provincial Junior Hockey League (PJHL), earning a first-round playoff bye.

The first round features Wingham vs. Walkerton, Kincardine vs. Goderich and Hanover vs. Mitchell.

Mount Forest will play the lowest seeded team after the first round.  The second round starts on Feb. 17.

The Patriots are looking for community support to cheer them on, team officials note.

Cribbin is not only “Player of the Month” for January, he is also a Patriots record breaker.

To top it all off, Cribbin has the most points in the PJHL.

Team organizers note the Patriots in fact have the top two point scorers in the province:  Cribbin with 86 (1st overall) and Birkett with 77 (2nd overall).

“We have guys that have been asked to play many different roles and they respond by doing the job.”

Team officials wished to  thank their “valued sponsors for their continued support.”  To view a full list of sponsors visit the Patriots website.