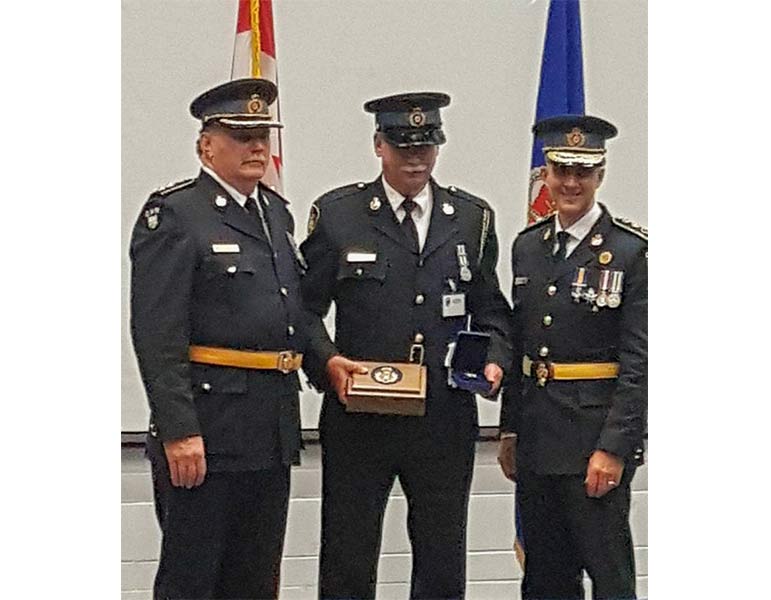 PALMERSTON – A 40-year police veteran has recently retired from the Wellington County OPP.

Henry Heidinga, 62, of Palmerston, started in policing when he was just 21 years old.

He said he first knew he would be a police officer when he read To Kill a Mockingbird in Grade 10.

“It’s one of the most important works of the century and if you want to talk about how to treat people and people being equal under the law you read To Kill a Mockingbird,” Heidinga said.

The book inspired the Orangeville native to start focusing in school and he got the grades to attend college in Toronto. Heidinga began his policing career with the London Police Service in 1979, right after graduation.

He sent out 133 applications in one day to all the police services in Ontario, excluding Toronto, Peel and the OPP.

“I got interview opportunities with three,” he said. “Two in the north and one with London. I was from south western Ontario, so I took London and they hired me.”

While with London, he once  guarded a hotel where Prime Minister Joe Clark was staying.

In 1986, Heidinga moved to the Palmerston Police service so he could be in a small town.

“Policing in a small town, you kind of manage the community,” he said. “Manage the trouble makers.”

Once the Palmerston Police Department was taken over by the OPP in 1999, Heidinga switched to the provincial service and remained in the county.

“Wellington County has been very good, both as (a) municipal and OPP (officer) for family life and for …  investment in community,” he said.

“You begin to care about what’s going on in your area. And the last 20 years that area has been this county.”

Heidinga held various roles with the OPP. He spent some time in the Teviotdale detachment, he was part of the traffic unit, he was a truck inspector, he worked with the marine unit and he inspected for dangerous goods, to name a few.

Specialized areas of policing are one of the draws to working for the OPP he said.

“Policing in the OPP is a much better lifestyle that allows you to be much better involved with your people that you deal with and with more specialization and more opportunities,” Heidinga explained.

“My heart has been with traffic-related issues and traffic fatalities.

He continued, “If you look at the statistics, it’s quite a bit larger, so to me that’s a very important component of policing, to make the road’s safe.”

On Sept. 19, Heidinga was recognized for his 40 years of service at the West Region Award Ceremony.

“It was nice,” Heidinga said of the ceremony. “Not a lot of officers go that long and it’s nice to be recognized by your peers.”

Reminiscing about his time as a police officer, Heidinga said a lot has changed.

“Change is good because change keeps you fresh,” he said. “Even if you don’t agree with all the changes, particularly in legislation, it still keeps you fresh and knowledgeable.”

One of the major changes is the process of an arrest.

“When I started you would say to an individual, ‘you are under arrest’ – that was it,” he said. “Now officers carry a small card that has quite a number of different cautions and different things that they have to read to [suspects] or tell them in relation to an arrest.”

He noted, “people had those rights all the way along, but as time went on they became legislated.” Police officers, he added, “respected those rights even before they were in legislation.”

Some other changes include the  uniform.

When Heidinga started he had his gun, a belt, shirt, pants and a coat.

“By the time I left … I would be wearing about 27 pounds of extra material,” he said. “We started off with the vest and then you received more things on your duty belt … use of force options or use of self defence options. Just things kept accumulating.”

Another change is that at the beginning of his Heidinga’s career, police cruisers didn’t have air conditioning.

After his 40 years of service Heidinga has some words of advice for anyone thinking about joining the police force.

“I have had the time of my life,” he said. “I would say if you’re going to join police work you will hear crotchety old officers who will say, ‘Oh it’s not the same as it once was.’

“That’s a good thing and I would say keep your circle of friends far wider than the people you work with … and have faith, faith in God. It keeps me grounded. And my family.”

Heidinga officially retired in the fall, but he is still attending court for matters he was involved with prior to his  retirement.