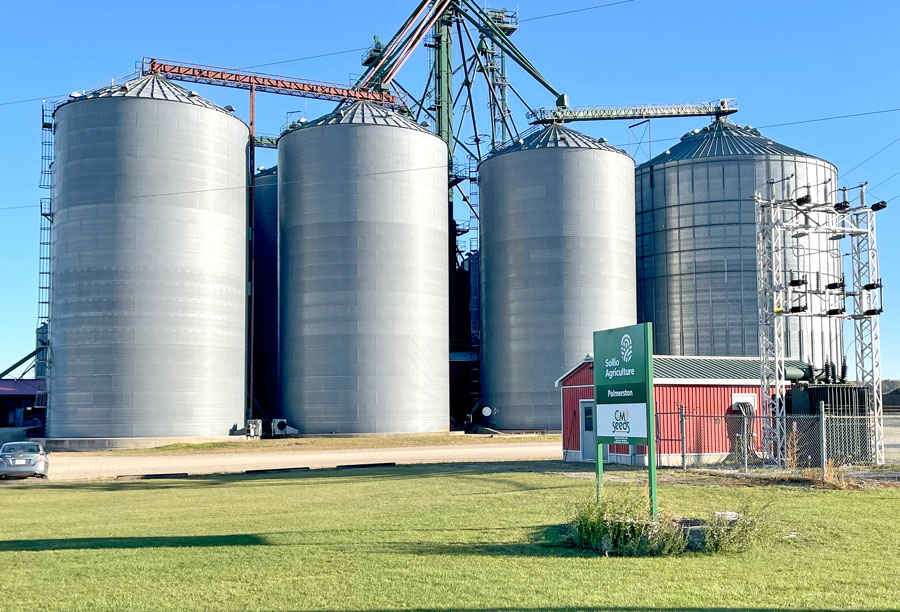 MINTO – A Palmerston-area grain elevator operation is among six in southwestern Ontario being shut down by a Montreal-based company.

Sollio Agriculture recently announced the decision to wind down its Ontario Grain operations, closing its elevators in Chatham-Kent and Lambton, Essex, Elgin, Oxford and Wellington Counties.

Palmerston Grain was sold by the McLaughlin family to Southwest Ag Partners in 2014 and subsequently acquired by Sollio Agriculture Grains in 2018.

Sollio, the largest shareholder in the Ontario Grains partnership, operated the Palmerston elevators on Minto’s 5th Line under that banner.

In a Sept. 20 statement, Sollio said Ontario Grain is attempting to sell the elevators in Florence, Staples, Saint-Thomas, Princeton, Wallaceburg and Palmerston and plans to continue serving clients during the 2022 harvest season.

However, capacity will be reduced as the company winds down its operations.

The company indicated financial challenges in the grain sector, including issues caused by the COVID-19 pandemic and Russia’s invasion of Ukraine, a major grain producer, led to its exit from the Ontario grain market.

Steve Lake, District 10 director for the Grain Farmers of Ontario, told the Advertiser it’s a little too early to tell what impact the closures might have on farmers and consumers.

“One of the pieces Sollio has mentioned is the opportunity for a sale of these assets, so while it might mean more consolidation and less competition in the Ontario market, the capacity might stay the same,” stated Lake in an email.

“In the short term they are honouring their contracts, which is good, but there is definitely the possibility that people will have to make some significant changes in their marketing strategies.”

Lake feels a wider impact on the local economy is also a possibility.

“We are looking at people’s jobs being impacted. We can’t ignore that there is a possibility that these elevators will close and not be replaced, so there might be people out of jobs and that will have an impact,” he explained.

“I think, from a farmer perspective, we are going to find places for our grain – the world still wants and uses Ontario grain – so we will still maintain our own positive impacts on local economies.”

“If we see any sales by Sollio and Ontario Grain to existing elevators who use this as an opportunity for expansion, versus a new player, then there will obviously be consolidation and that could mean less competition, which is a concern,” he stated.

Noting farmers are “price takers, not price makers,” Lakes said they “rely on competition to keep prices fair and reasonable.”

“I hope that we do see someone make use of the expertise of the workforce and the assets of the elevators to keep them going,” he said.

“It’s unexpected things like these closures that should remind all of us of the importance of risk management programs for farmers.

“We can control only a small piece of what impacts our farms and businesses and we really do need a well-funded cost-shared program for farmers to leverage in times of crisis.”