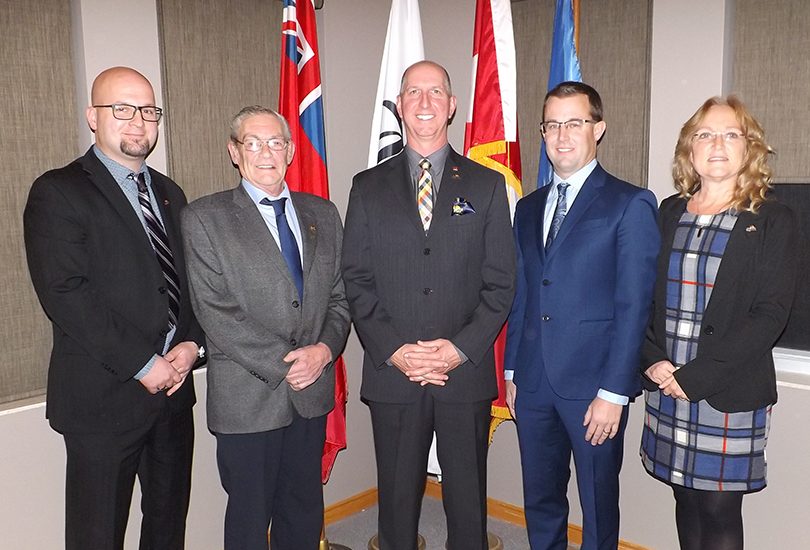 Members of the outgoing Mapleton Township council, pictured here at the inaugural meeting on Dec. 3, 2018 reflected on the past term and their time on council at their last meeting as a group on Nov. 8. From left: councillors Michael Martin and Dennis Craven, Mayor Gregg Davidson, and councillors Paul Douglas and Marlene Ottens. Advertiser file photo

MAPLETON – Some local council members reflected on the past term and their time on council during their last official meeting as a group, Nov. 8.

“After a lot of years of sitting here, as I ride off into the sunset, I look back and there’s been a lot of changes made in the last three years,” said councillor Dennis Craven. “And if it hadn’t been for the great staff that has been here the last three years, a lot of that would not have happened.”

Craven did not seek re-election after serving numerous terms on council for both Mapleton and former Maryborough Township for nearly four decades.

“I also want to give credit to all the councillors that I’ve worked with for the last 38 years,” Craven added.

“It’s been an interesting four years with COVID and virtual meetings and limitations on … some of the events and things,” said councillor Paul Douglas, who also did not seek re-election.

“But … I learned a lot … I think it’s a good experience for any interested community member to put their name forward and see how things actually work. It gives you some different perspective,” added Douglas, who was elected to Mapleton council for the first time in 2018.

Mayor Gregg Davidson said, “I think we’ve had a really good council session these last four years. So I’m looking for another good four years ahead of us.

“We still have a lot of work to do and I appreciate the work that this council has done over the past four years. Even through the pandemic we’ve accomplished so much.”

The newly-elected Mapleton Township council was set to be sworn in at the township’s inaugural meeting on Nov. 15.