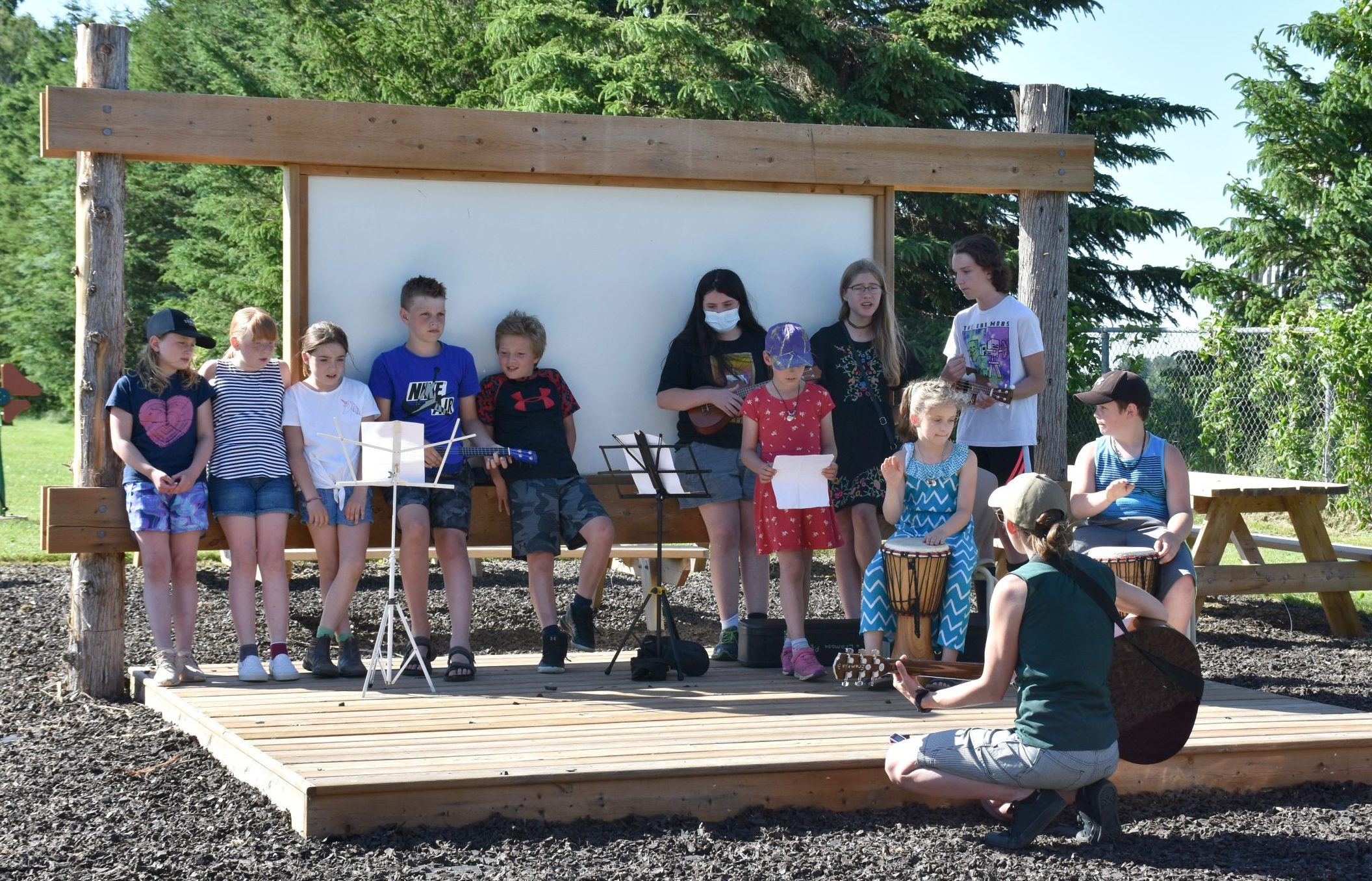 An outdoor classroom at Eramosa Public School has been dedicated in memory of former teacher Darlene Shaw, recognizing her impact on the school community. Photos by Paige Peacock

GUELPH/ERAMOSA – An outdoor classroom has been dedicated in memory of a former Eramosa Public School teacher, Darlene Shaw, who school officials referred to as the “fairy godmother” of the school.

Friends, family and past co-workers gathered at Eramosa Public School on June 16 to commemorate the former teacher for her commitment to the school community.

A teacher for over 30 years, Shaw spent 20 of those years with the Eramosa school community, impacting many lives during that time.

After Shaw passed away in December of 2019, the school searched for a way to honour her.

“She truly was the centre of our school, we all agreed that she loved music and she loved the outdoors,” said kindergarten and resource teacher Jacqueline Nyman.

“She loved taking her class outside to learn and an outdoor classroom seemed a perfect way to honour her.”

The outdoor classroom has provided a space for classes to enjoy art and music activities, science, and even class meetings, Nyman explained.

The dedication began with stories from past and current Eramosa Public School staff, recalling fun and amusing memories of Shaw’s time with the school, followed by a student performance of Last night I had the Strangest Dream, a song Shaw would play on her accordion for Remembrance Day each year.

During the dedication, Nyman recalled how if she happened to mention in the staff room that she needed supplies for something, she would come to school the next day to find an abundance of whatever item she needed on her desk.

After Shaw’s retirement, Nyman was the first teacher to take over her classroom.

On her first day back, Nyman said she opened her desk drawer to find 30 rulers, 30 sharpened pencils and 30 new erasers lined up and waiting.

“Ever the efficient teacher, Darlene had it all ready for me,” Nyman said.

“If it is quiet in school in the morning or the evening, I still feel like I can hear Darlene’s footsteps running up and down in the hall – she never walked,” she added.

“She did so much for all of us and she made it look easy.” 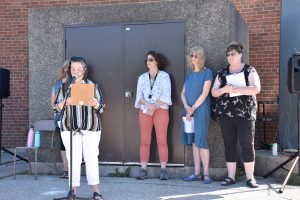 Friends, family and past co-workers gathered at Eramosa Public School on June 16 to commemorate former teacher Darlene Shaw for her commitment to the school community. Photo by Paige Peacock

Although she didn’t work with Shaw long, office coordinator Simone Kent said one of her most notable memories of Shaw was being invited to a Christmas lunch.

Kent said she didn’t know what to expect but was “completely floored” when she walked into Shaw’s class to find multiple tablecloth-covered tables set for a full turkey dinner and every fixing.

“Not only was the feat of what she had done incredible, but the reasoning was profound and sticks with me to this day,” Kent said.

“She did this to share something she enjoyed with her students.

“She did it to give students who may never experience a meal like this a chance to try new things,” she added.

“And she did it to keep her tradition in her class to provide a sense of family and security for her students.”

Allison Semanyk, who taught alongside Shaw for 16 years, said Shaw was a teacher she looked up to.

“I would observe the things she would accomplish throughout the year, and I hoped I would also make a difference like she did,” Semanyk said, adding Shaw was like the “mama hen” around the school.

“I would always say she had pep in her step,” Semanyk added. “She would walk those halls with a purpose, and it was always for her kids.”

Having been relocated to Shaw’s old room two years ago, Semanyk said it will always be “Mrs. Shaw’s room.”

Jennifer McKnight, who taught with Shaw for over a decade, referred to Shaw as “a machine.”

“Every single thing that happened around the school ended up coming back to Darlene in some way, shape or form,” McKnight said.

In addition to serving as a teacher, Shaw held many other roles at Eramosa Public School.

She ran just about every assembly, organized carol songs at Christmas, took part in organizing the Terry Fox Run and Jump Rope for Heart and other events like the school’s carnivals and play days.

She would also facilitate the entire Remembrance Day assembly, getting her class to sing different songs and accompanying them on the accordion.

“Nothing could really stop Darlene,” McKnight said. “She was a force. She was somebody to look up to in teaching and to strive to be everything she was.

“It didn’t matter what was thrown in her way, she was able to adjust, fix, learn and keep going.”