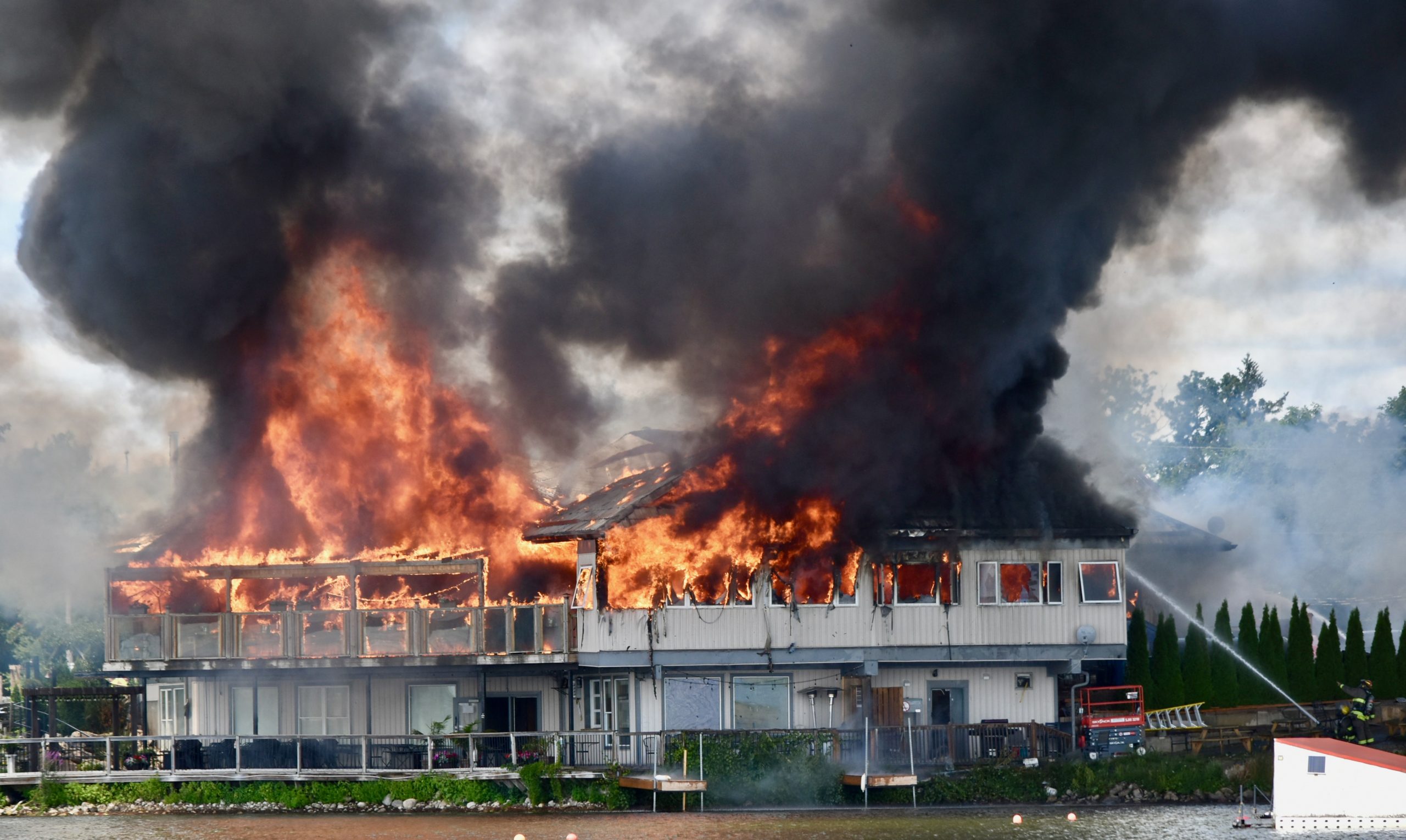 The Old Marina Restaurant on Puslinch Lake was destroyed by fire on July 30. (Photo submitted by Donna O'Krafka)

PUSLINCH – A local landmark on McClintock Drive by Puslinch Lake was destroyed by fire on July 30.

Black smoke from the Old Marina Restaurant and Gift Shop plumed into the sky on Saturday afternoon, seen from miles around, as a fire raged through the family diner, much beloved by locals and tourists alike.

Firefighters from Cambridge arrived first following a report of the fire called in at 12:48pm.

Mutal aid from adjacent services was requested shortly thereafter, with five departments responding to assist in battling the blaze.

Early social media reports from fire services conveyed a scene in which the restaurant, with its dockside views and patio, was fully consumed by flames.

Video footage posted to social media by a Twitter user identified as “Brent Bullough” showed thick columns of grey and brown smoke billowing from the top level of the Old Marina as wind carried the smoke along the lake’s northern shore, obscuring the view.

Lake resident Donna O’Krafka was relaxing in her home of 18 years when she received a call from a north shore neighbour reporting the blaze.

Along with her husband Larry, the couple piloted their pontoon boat over to the unfolding scene to see flames extending from recently replaced windows and siding now turned to drooping, melted plastic.

“It’s a sad thing,” O’Krafka said by phone, adding she got to know the current owner when dropping off a quarterly Puslinch Lake conservation newsletter she produces. “They [will] have lost a heck of a lot,” she said.

The location falls within a shared servicing agreement for fire service, so although Cambridge Fire Department was in command, Puslinch Fire and Rescue Service has since taken over and is overseeing an ongoing investigation in to the fire’s cause.

Puslinch Fire Chief Tom Mulvey said firefighters faced intense heat when trying to enter and were pulled back to defensive positions, applying water from outside the building.

A steel roof made getting water to the source difficult, Mulvey said by phone on Tuesday.

On Saturday evening an excavator began knocking down portions of the roof and building to allow for better access, but the chief said a “tremendous amount” of the roof collapsed and covered debris, allowing it to continue burning.

Firefighters focused on hotspots as the fire devoured the building — adding foam with air bubbles to the water, helping water to reach the seat of the fire and prevent reignition — throughout Saturday night and into Sunday morning. 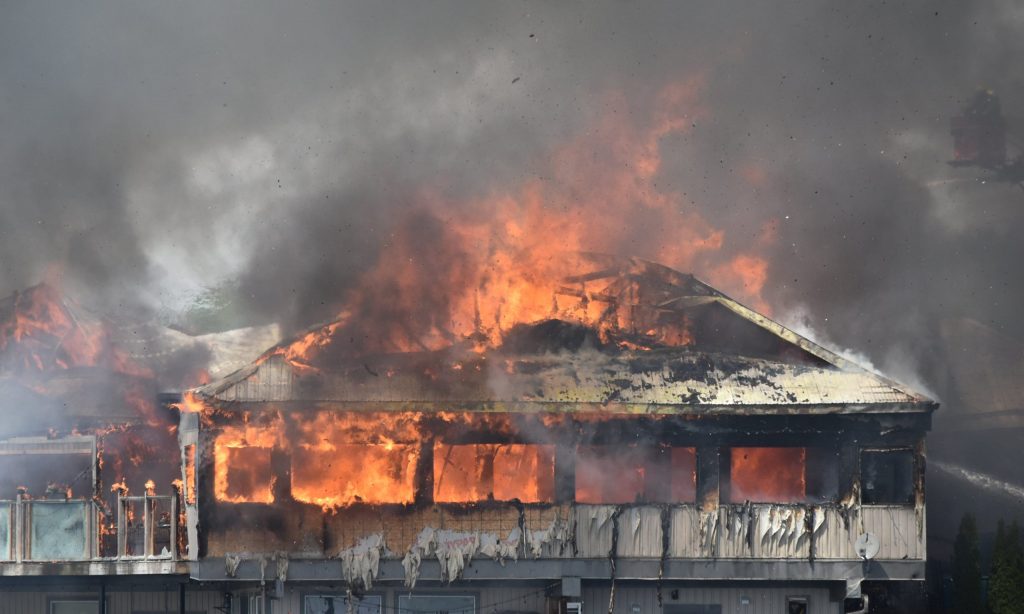 According to Mulvey, Puslinch firefighters and equipment remained at the lake at varying levels for 22 hours straight.

Mulvey was back on scene Sunday as firefighters continued putting out hotspots late into the morning.

By Sunday evening the building was released back to the owner, Mulvey said.

A preliminary damage estimate is pegged at $2 million, but a final amount will be determined by an insurance company. 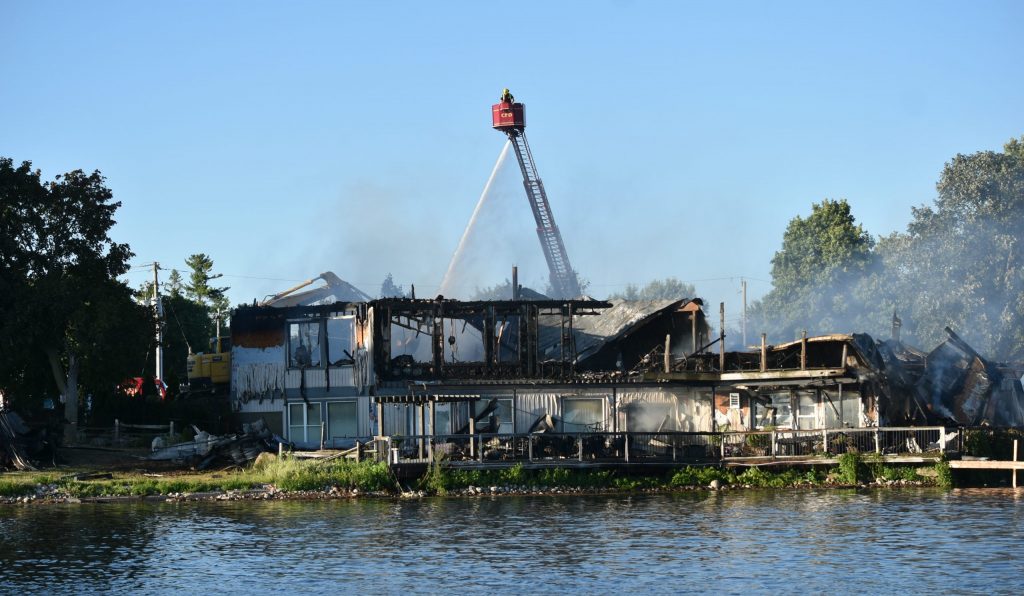 Puslinch Fire and Rescue Service is investigating the cause of a fire that destroyed the Old Marina Restaurant on July 30. Damage from the fire is estimated at $2 million. Photo by Donna O’Krafka

Mulvey declined to say what caused the fire; his department will continue to investigate once an insurance company arrives to go through the ruble and what’s left of the structure and fieldstone walls.

“We’ve talked to [restaurant staff] that tried to extinguish the fire in the first place, so we have a good idea of what it is,” Mulvey said without providing details.

“The fast work of the staff evacuating the restaurant resulted in no one getting injured and that’s the most important thing,” he said.

The Old Marina Restaurant was officially opened in 1993, though the property has welcomed visitors since the 1920s as a dance hall and later a marina.

The restaurant previously suffered a devastating fire in 2005 and reopened in 2007.