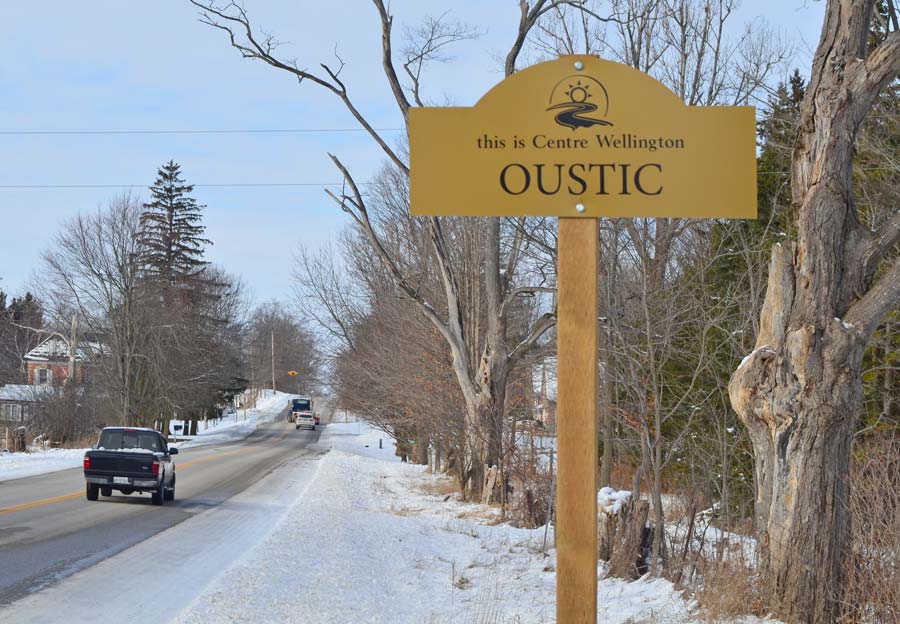 Signage - As part of Centre Wellington’s Wayfinding Signage Plan, drivers will see new signs as they approach different hamlets in the township, such as Oustic and Speedside.
Photos by Phil Gravelle

CENTRE WELLINGTON – Township officials say new entry signs at hamlets here “create a connection” and provide continuity, but some residents have questioned their size and location.

The signs are part of Centre Wellington’s Wayfinding Signage Plan, which was originally adopted in 2008 but has just recently been completed.

“The plan was created to create a connection between township district areas, new developments, destinations and settlements throughout the township,” said tourism and destination coordinator Deb Dalziel.

“The plan recommended that all signage throughout the township should reflect a consistent and harmonious design.”

The signs, which are about 30 inches wide with lettering much smaller than the old blue place name signs, were designed by Stempski Kelly Associates Inc. in Fergus. 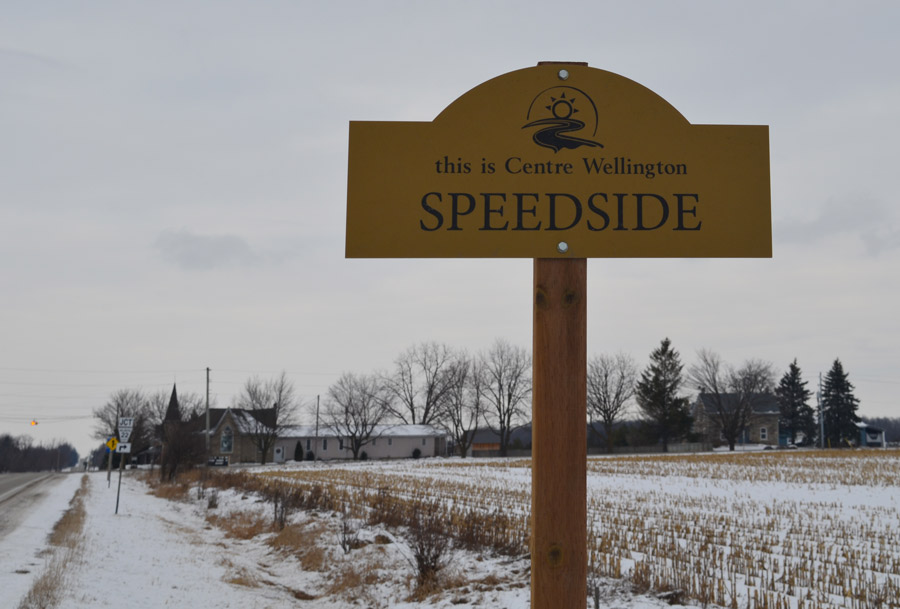 Longtime Oustic resident Ann Melnyk is one of several township residents who isn’t ecstatic with the change.

“The signs are cute. They’re very quaint – when you stand right in front of them,” she said, alluding to the smaller size.

Melnyk, who noted the signs are “virtually invisible” at night, also wondered why a Centre Wellington sign was placed in Oustic on the south side of Wellington Road 22, which is part of Guelph-Eramosa Township.

The signs contain the slogan “this is Centre Wellington,” even though in hamlets such as Speedside and Oustic, which cross municipal boundaries, the signs have been posted within Guelph-Eramosa.

Harry Niemi, director of public works for Guelph-Eramosa, said that while the signs were posted without consulting Guelph-Eramosa, he is not concerned about the situation.

However, Dalziel said the signs were installed by Centre Wellington’s infrastructure services department and “Public works staff communicated and received approval for installation with the County of Wellington and the appropriate municipalities where locations impacted … neighbouring communities (i.e. Oustic).

Even if in the right location, Melnyk said the signs probably shouldn’t be so small that “you have to be right beside it to read it.”

But, she conceded, in the grand scheme of things, the issue of small signs is not a huge deal.