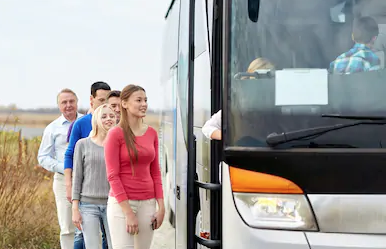 WELLINGTON NORTH – A new bus service will soon be coming to Wellington North, transporting residents north or south as they wish.

At its Aug. 24 meeting, council approved the use of municipal parking lots in Arthur and Mount Forest as drop-off and pick-up points for the Owen Sound to Guelph Voyago inter-community bus service.

Voyago, the City of Owen Sound’s chosen operator for its Guelph Owen Sound Transit service, plans to launch the bus service on Aug. 31, following a delay from a spring launch due to COVID-19.

In January, Kasper Bus Lines started to offer a similar route between the two cities, with several stops in Wellington County.

“I’ve had a lot of questions about this bus service, when is it going to happen. I’m happy to see that the rates are very reasonable.”

From Arthur to Guelph, Fergus or Elora is $5.From Mount Forest to the same locations the cost is $10.

A one way trip from Owen Sound to Guelph will be $20. The fare depends on the distance travelled.

It will travel two round trips a day leaving Owen Sound at 7:30am and 1:30pm arriving in Guelph at 9:45am and 3:47pm respectively.

There is no cost for the township to allow stops in Mount Forest and Arthur, and the City of Owen Sound received a grant of about $1.4 million from Ontario’s Ministry of Transportation for the bus service.

“We want to do what we can to encourage its use because many residents in our community have identified this as a need and we now have a service available that we haven’t had for quite a number of years,” Mayor Andy Lennox said.

“I think we may might even want to spend a few dollars just to help them out if we have an opportunity to do so, because I think we want this to stick around long term for the long term benefit of our residents.”

Lennox added, “So we’ll see how it goes and maybe we can assist with this as we go along.”