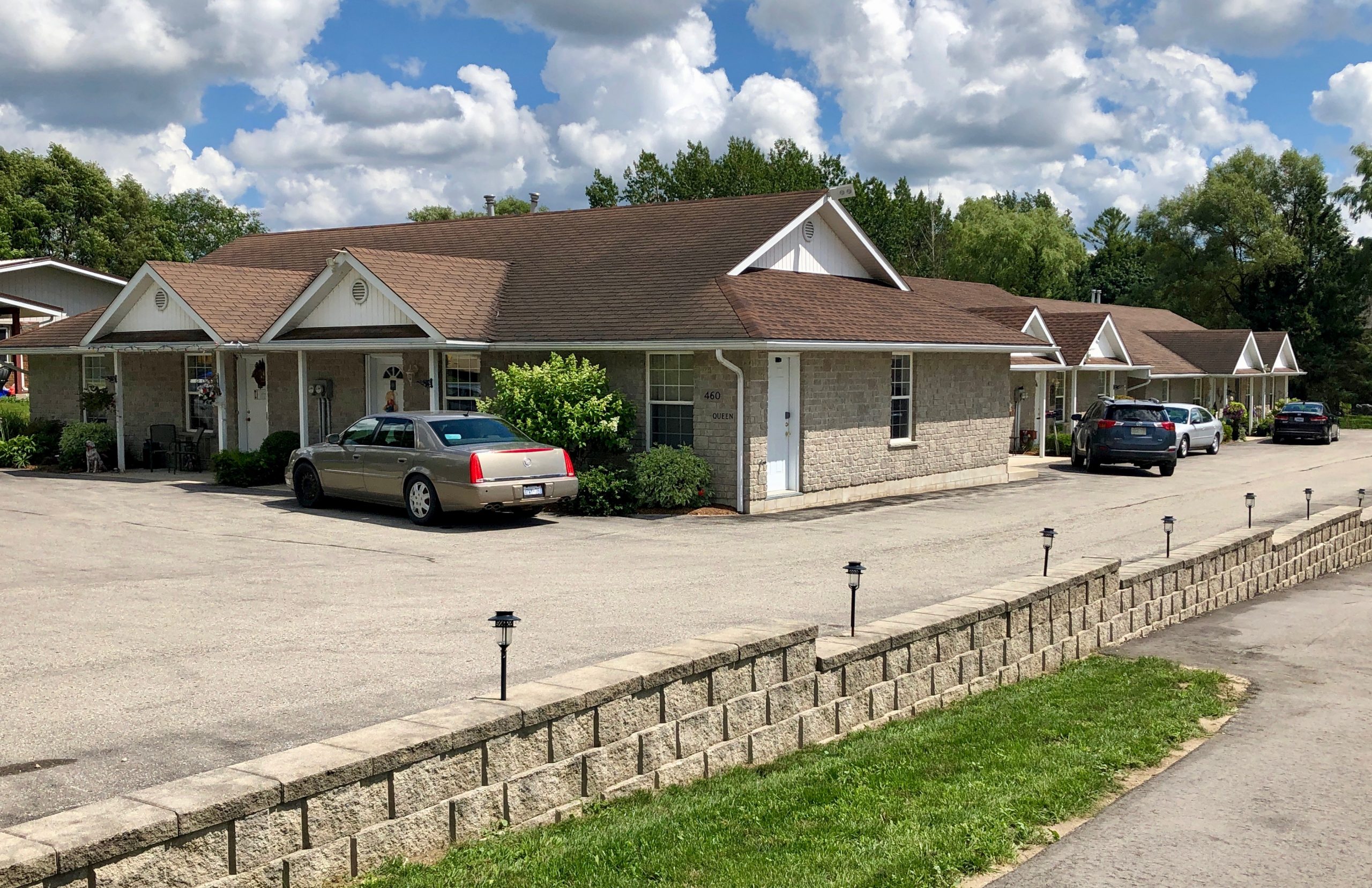 The developers of this six-unit townhouse on Queen Street in Mount Forest are seeking as zoning amendment from Wellington North Township to allow a similar development on Cork Street. Photo by Patrick Raftis

WELLINGTON NORTH – A bylaw authorizing a zoning amendment to permit a six-unit townhouse development on Cork Street in Mount Forest will be considered at the next township council meeting on Aug. 10.

Developers Josh Albano and Peter MacKenzie are requesting an amendment to change zoning – from R2 Residential to R3 Residential – on a 3.2-hectare property at 350 Cork Street.

The amendment would facilitate increased density and the construction of a six-unit row townhouse.

During a public meeting on the amendment, Wellington County planner Matthieu Daoust advised council that due to “deficiencies” found during the site plan review process, the draft bylaw to allow the amendment needs to be revised and a final report will be presented to council on Aug. 10.

Albano told council the amendment is required because current zoning allows for just a four-unit building on the property and the developers hope to construct six units with garages.

Albano said the proposed building would be a purpose-built rental, ”which we have found to be in high demand in your municipality.”

He also said the townhouse would be similar to a six-unit project built by the developers on Queen Street West in Mount Forest.

In a letter presented at the meeting, Waterloo Street residents Christopher McGaughey and Noelle Jones raised concerns about parking and traffic flow in the area, which is near the Mount Forest and District Sportsplex and Cork Street Park.

“A problem that has occurred on Cork Street is the amount of cars parking on the east side of the street due to the new houses being built only allowing one-car parking,” the letter notes.

“This has had neighbours parking their cars on the road and in the west field of Cork Street.

“This problem is only going to be amplified once houses are built on the west side of Cork Street directly across from this property.”

The letter continues, “Once those houses are built the cars that park in the field are now also going to be parking on the road as well, which is going to cause an issue in the winter when no one is allowed to park on the street.”

The letter also states the construction “will eliminate a ton of trees and change the entire look of the neighbourhood.”

“We need to really ask ourselves if greed is worth destroying a community over,” states the letter from McGaughey and Jones.

“We need to keep in mind, as much as Ontario is pushing certain agendas on how we are building, that we are not Toronto.”

Matt Lantz, who lives next door to the proposed development, raised concerns about drainage, snow removal and emergency vehicle access.

Lantz said he was speaking on behalf of several residents of the area around the development.

Albano pointed out the builders’ plans call for more than the minimum amount of parking.

“We would have more than two spots for every unit,” he said, noting plans include visitor and accessible parking – “So quite a bit of parking for everyone.”

MacKenzie agreed the area offers “a lot of natural beauty.

“We’ve seen the comments from the neighbours that they’d like to keep that and we agree,” said MacKenzie.

While he said the developers will aim “to keep as many trees as possible,” he conceded, “some of them will have to go.”

“This is R3, but we’re looking to stay low-rise. We’re single-level, not multi-storey or anything like that,” MacKenzie added.

In response to traffic flow concerns, MacKenzie stated “there will be very little traffic that will probably enter and exit this property.”

Daoust stated many of the concerns raised at the meeting can be addressed by the township through the site plan review process.

“Site design, grading, servicing, stormwater management, landscaping, parking, fencing, etc. will be reviewed as part of the site plan review,” he noted in a written report.