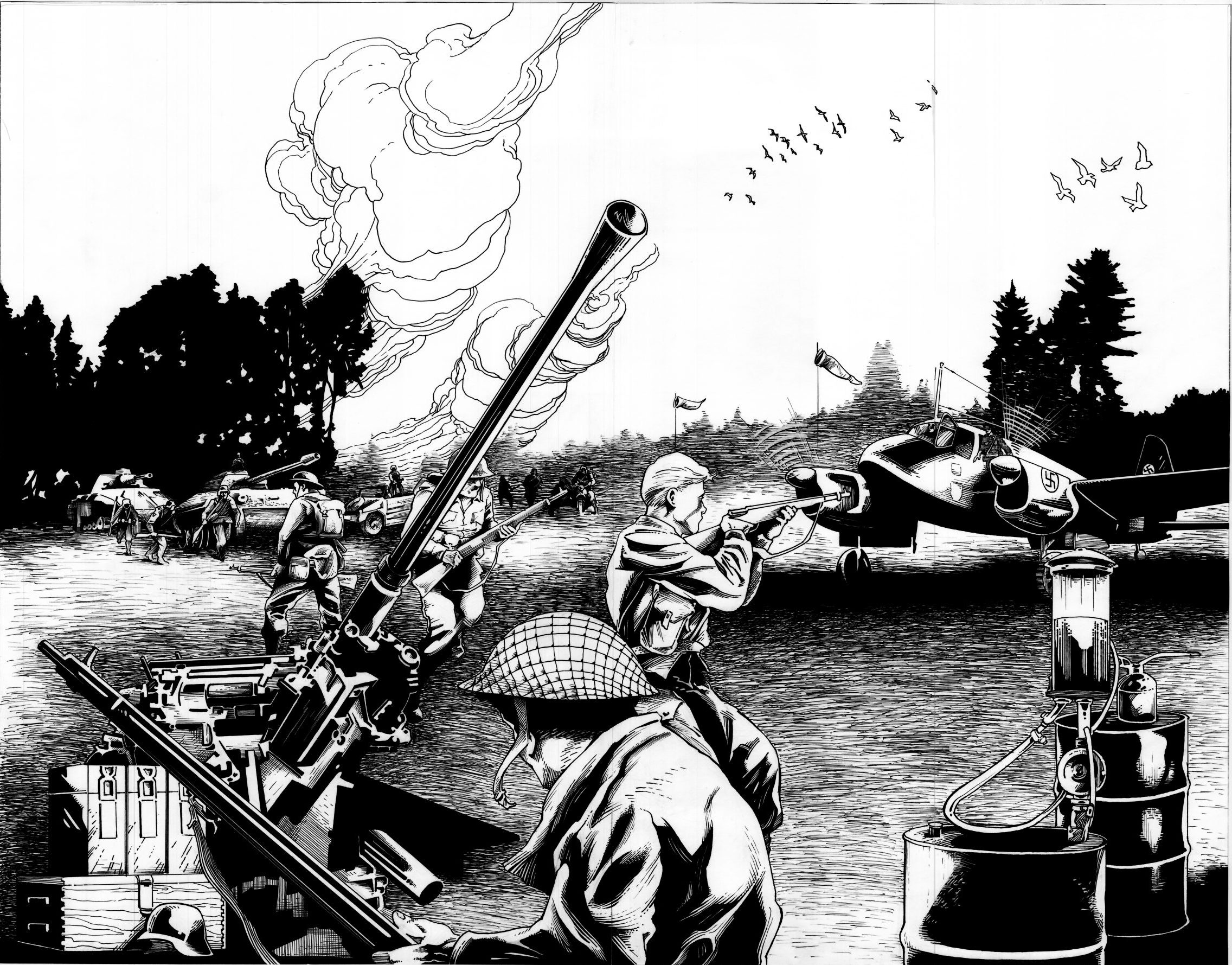 MOUNT FOREST – A 14-year-old based in London, England and a comics illustrator from Mount Forest have recently collaborated on a graphic novel.

The project, which initially began as an English history assignment, has become much more for the young writer.

Set in wartime Canada, England and Germany in 1941-42, Johnny Recruit follows 14-year-old Johnny after he learns his uncle’s been captured by Nazis.

Determined to rescue his mentor, the young teen lies about his age, joins the war and sets out to find his uncle.

The Second World War inspired comic dons the style of early war comics and propaganda posters featuring double-page spreads and no dialogue. The book is slated for release in March. 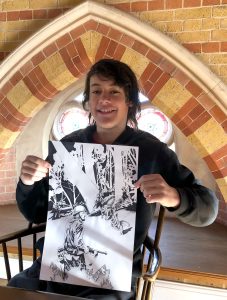 Behe, a Canadian student studying in London, said the book is based on the young writer’s great uncle who fought in World War II as a pilot for the Royal Air Force.

“Uncle Bert influenced my writing the most,” he added.

“I often see family members who knew him – they have told me so many great things about Bert, learning about his heroic actions.

“The first pages of the book are very prominent with Canadian things,” Behe said. “This country has definitely influenced the book very much.”

He noted many of the landscapes featured in the opening pages are Canadian inspired, including a bush plane landing shown on a dock early on – an idea inspired from Trout Lake, Ontario.

After discussing the project with Muzzell, Behe came to learn they had something in common.

Muzzell’s great uncle was a heroic soldier who spent three years in a German prisoner of war camp.

“I quite like history and the wars in general quite fascinate me like World War One, World War Two,” Behe said of the inspiration. “They’re both quite interesting in general.”

Asked if he found any part of himself translated into the main character, Behe said he did in some ways.

“If I was in his shoes, I’d probably do the exact same thing,” he said.

“It’s kind of an idealistic way of how I joined the war, got my great uncle back. So yeah, a bit of me was translated onto the page.

“It was fun – at times a little bit difficult, because you have to keep getting ideas onto the page,” he said of the 18-month project. 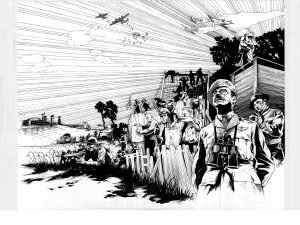 Behe said from doing the comic, his planning and creativity skills have really improved, which he said will help him in school and in future assignments.

“I learnt that you have to start with the structure of the story and the plot, and being patient is really key,” he said.

“You shouldn’t get worried about future details and ideas not forming right away.”

In terms of a second project, Behe said he ended the comic on a cliffhanger just in case.

“You don’t have to be a great comic book drawer to draw a comic book,” his father, Thomas John Behe, said.

“And I think there’s a lot of kids out there that might feel apprehensive about it.”

He said finding someone like Muzzell to illustrate the story is part of what encouraged Behe to go through with the project. 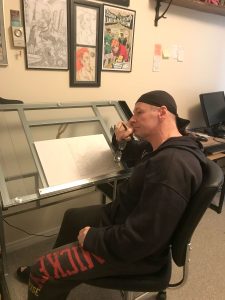 “We saw some sample drawings,” Behe said. “And we really liked the black and white drawings, so we gave him one of the starter pages to see how it was and it turned out really great, so we decided to keep him all the way through.

“I just think he understood what we were trying to get out of the book really well.”

A freelance artist since 1984, Muzzell’s first published work was a full-page illustration in a children’s magazine.

After assuming various labour jobs over the years, the Mount Forest resident retired two years ago to pursue his love of illustrating full time.

As far back as he can remember, Muzzell has been doing artwork.

“I knew that’s what I’m supposed to do,” he said. “It’s what I was meant to do, and I just did it on the side all my life until not too long ago.

“I always wanted to do it full time in there somewhere,” he added.

“And I just decided I’m tired of making other people money and I’m tired of working hard for someone else, let’s put all that energy into seeing what I can do.”

Since retiring, Muzzell said he’s been stunned by the amount of response he’s received.

“I was just bombarded with all kinds of jobs,” he said. “And it’s been fantastic.” 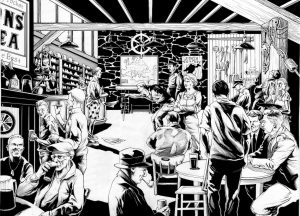 Given that the story unfolds in double-page spreads, Muzzell said it challenged him to consider different perspectives.

He said when it comes to illustrating a comic book, the clearer a client is about what they want, the easier it is for him.

“This particular job for the Behe’s Johnny Recruit, the communication was great, and we got along really, really well,” he said.

“And it was a real joy to work for them. It was a good story.”

Behe said Muzzell was able to bring the project to life the way he had envisioned.

“We had what we wanted the page to turn out like, and as soon as he saw that, he was like, ‘yeah, that’s great stuff,’ and then he added some of his own stuff,” he said.

“It was just perfect all together.”

Given that the story unfolds in series of double-page spreads, Muzzell said it challenged him to consider different perspectives and the different wants of the client, in order to fit it all into one picture from the same angle.

“As far as I understand, there’s no words in the book, so the visuals, of course, are not just important, they’re super important,” he explained.

“I’m telling the story, which a comic artist does anyway. But it’s even more critical that I get everything right for them.”

Despite the challenges, Muzzell said the Behes explained themselves very well and were very specific in what they wanted, leaving him with few revisions to do. 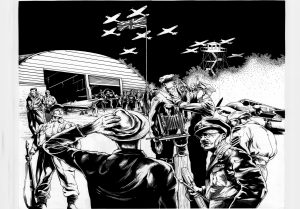 Johnny Recruit is slated to be released in March.

As an illustrator, Muzzell said he’s been drawn to comic books from the time he was a kid.

“By the time I was in high school, I knew in my mind I was going to be a comic artist,” he said.

“I get to tell a story and do it,” he said. “It’s like a movie director only it’s done in panels.

“You have to keep it interesting and exciting, and you have to, depending on what the story is, you have to show the emotion.”

In the digital age of computers, Muzzell said artwork has completely evolved and everything has become much more enhanced.

Muzzell, who refers to himself as “old school,” still does all his illustrations by hand, from the drawings right down to the inking.

“I’ve used the remark a few times over the years that I want to be found dead slumped over my art table with my pencil in my hand,” he said.