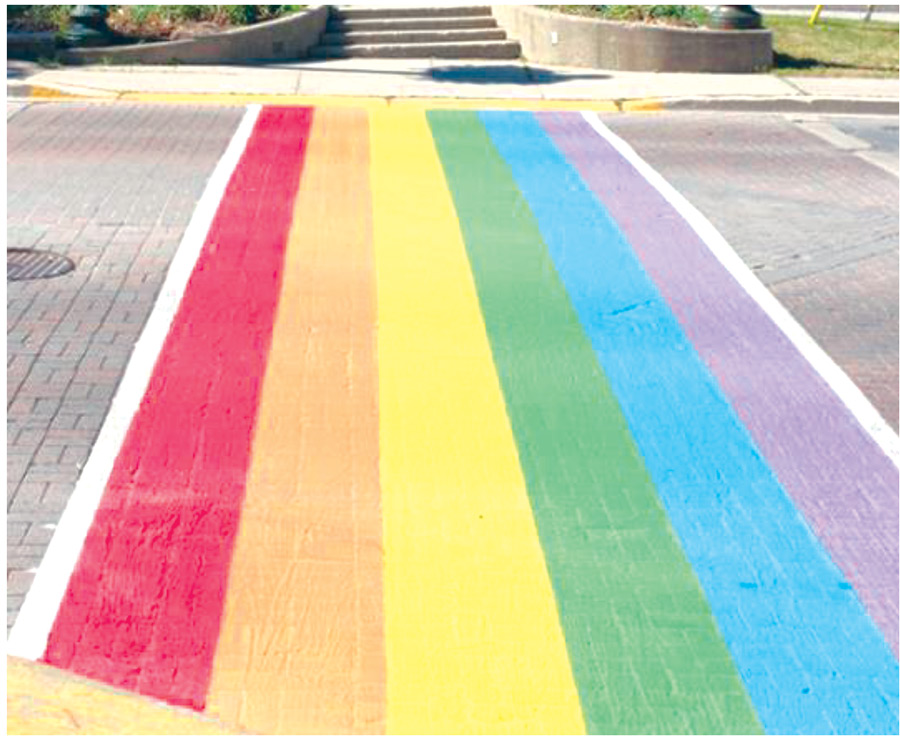 The Minto Pride committee would like to see rainbow crosswalks, like this one on Broadway Avenue in Orangeville, installed in urban areas of the municipality. Town of Minto agenda image

The minutes of the Sept. 27 Minto Cultural Roundtable meeting, presented at the Oct. 5 council meeting, included a two-part proposal requesting support for the installation of a pride crosswalk in all three communities, as well as a permanent pride art installation.

“The committee emphasized the importance of extending our community’s pride efforts past the month of June (Pride Month), to demonstrate the town’s ongoing support for the LGBTQ2+ community in our area,” the minutes note.

Economic development manager Belinda Wick-Graham suggested the committee focus on crosswalks in 2022 and begin researching a direction for a public art project for 2023.

The Minto Pride committee indicated it plans to fundraise and seek cultural grant opportunities to offset the costs of the projects.

A proposal from the Pride committee explained why members feel more permanent pride displays are needed.

“In June, with the support of the Cultural Roundtable, we decorated the Minto downtowns to demonstrate the acceptance and celebration of the 2SLGBTQ+ community. The decorations and sentiment behind them were well received by the community,” committee members stated.

“However, over the course of the month we had multiple pride flags that were stolen, replaced, and stolen again. Having permanent installations such as rainbow crosswalks and public art would mitigate the removal of these symbols of pride, and show that all families belong in Minto year-round, not just in June.”

The minutes included a motion of support for three pride crosswalks (one each in Clifford, Harriston and Palmerston). The motion also calls for the Pride committee to work with CAO Derrick Thomson and Minto public works to implement the request and that $30,000 be included in the 2022 capital budget for the project.

“A red flag goes up to me with that,” said MacKenzie.

“As much as we support, and we do, from time to time, support special interest groups, and we certainly entertain suggestions from them, with these coloured crosswalks I think we need more discussion on them and the amount of money they’ve suggested.”

Councillor Judy Dirksen was also concerned about the potential cost.

“One of the great challenges of our day is the temptation to stay silent … and thereby not offend anybody … you really can’t say anything wrong if you say nothing at all,” said Dirksen.

“So, with that in mind, I’m not wanting to offend anyone, so let’s not worry about what the crosswalk is, I just had a concern about crosswalks.”

Dirksen said the wide range in the provided estimate is “a red flag to me. I can’t see why the big difference.”

Dirksen also noted that while the committee is proposing to seek grants and raise funds, “it looks to me like the town is actually being asked to grant $30,000, which should cover three crosswalks.

“So I’m thinking that’s a little steep for what it is. I’m concerned about repairs and maintenance and vandalism and fading and that kind of thing,” she added.

“And then I also wonder what other groups might want to have a crosswalk installed?” Dirksen continued.

“So the Legion might want to have one to commemorate our veterans, for instance. I just saw the orange crosswalk in Orangeville last week that is reminding us about truth and reconciliation of course.

“And perhaps the faith community would have an idea? Palmerston Lions, ag society, horticulture society and so on, so forth? I think we need a policy going forward … are we going to donate 10 grand to every group that might want a crosswalk in the future?”

Thomson, who was present at the Cultural Roundtable meeting where the proposal was presented, said it is his understanding a report would be prepared for council before any funds were committed.

“I think the intention of the Pride committee was simply to do some background investigation into crosswalks and to provide crosswalks and they listed a number of examples in costings,” Thomson stated.

“I did speak up at the meeting and say that the best course of action would be to refer it to me through my role in public works and that we would do an investigation and look at all the things that councillor Dirksen mentioned, and councillor MacKenzie … and we will bring back a report to council for a full debate.”

The amendment was approved in a recorded vote, with Dirksen, deputy mayor Dave Turton and councillors Jean Anderson, Ron Elliott and Geoff Gunson in favour. MacKenzie opposed the amendment. Mayor George Bridge was not present at the meeting.

The amended motion then passed unopposed.