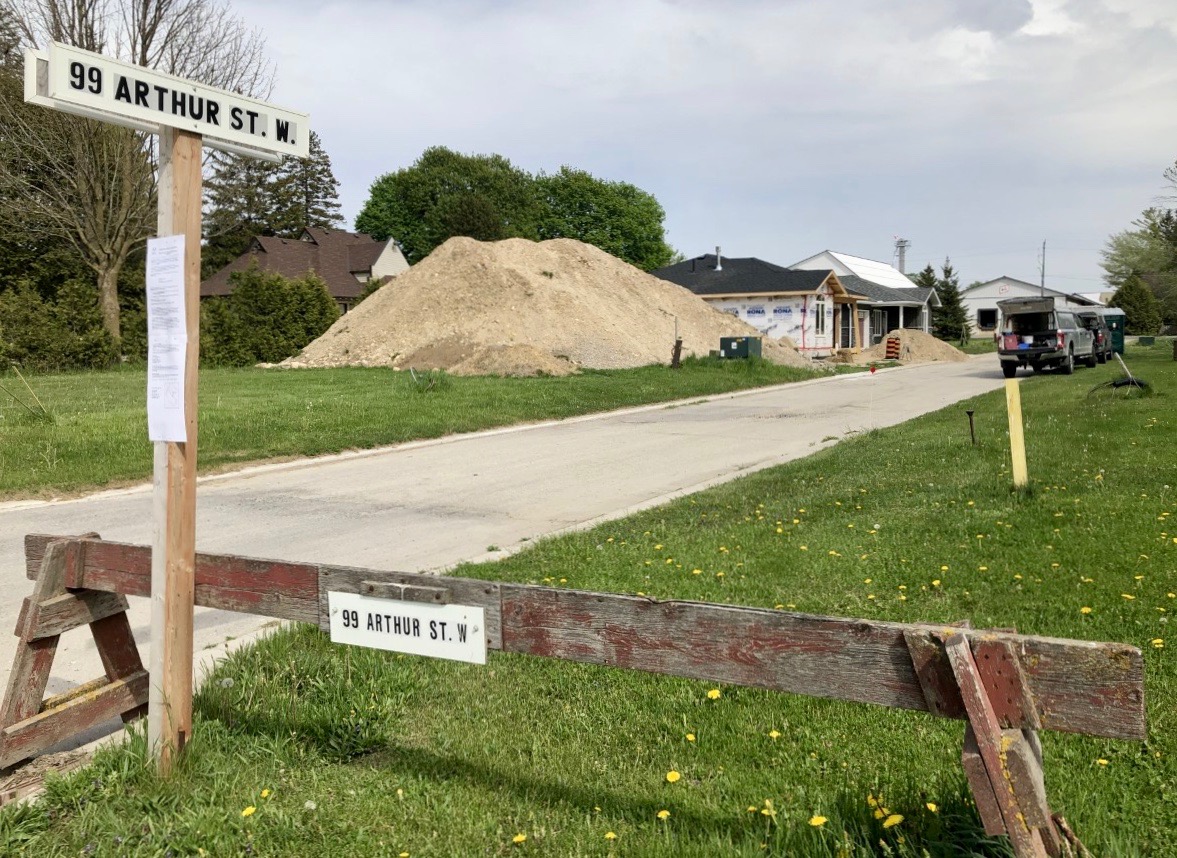 Minto council has granted a minor variance for a reduced side yard setback, paving the way for a land-lease development featuring 16 single-detached units on a half-acre property on Arthur Street in Harriston. Photo by Patrick Raftis

MINTO – Town council has approved a minor variance to facilitate the construction of 16 land-lease single-detached senior dwellings on a half-acre property in Harriston.

During a May 18 public meeting, planning technician Ashley Sawyer explained the planned development is located at 99 Arthur Street on property owned by Framark Development Company Ltd.

The units will be located on both sides of an interior street, dubbed Howes Lane.

“It’s a through street, just through that development, that goes out to Brock Street,” she explained.

The property currently has one completed single-detached dwelling unit on it, with another under construction.

Sawyer said the developer was seeking a reduction of the side yard setback required under the town’s zoning bylaw in order to provide more parking for the units.

“So the applicant Is looking to reduce all interior side yard setbacks, regardless of the situation, to four feet. This is so he’ll be able to provide two parking spaces and not have to reduce any square footage of the home.”

In her report, Sawyer also pointed out that by allowing for a reduction in the interior side yard setback the developer has noted the front yard setback will be increased and will “help reduce the narrow/tunnel feeling of the current approved development plan.”

The land lease component of the development means that purchasers will be able to buy the single-detached dwellings and pay a monthly fee for the land the property is on. The fee will include all lawn care, landscaping and snow removal, to be maintained by the developer.

“This development is aiming to provide housing to seniors who are unable or not wanting to have the physically demanding responsibility of maintaining the outdoor space of their homes,” the report states.

“Land lease means that you own your house, but the developer owns the property, so you don’t have to look after things like landscaping, grass cutting, snow removal and all that fun stuff,” said Sawyer.

“We’re just trying to create something that’s useful to the older generation that needs housing,” said Mark Harding, who co-own Framark Development Company, as well as a local construction company, Heritage Builders, with his wife, France.

“I know Mark’s a very credible builder and I would support this 100 per cent. We certainly need it in our community,” said councillor Ron Elliott.

“I’m very intrigued with this land lease idea. I think this is a great thing,” said councillor Jean Anderson.

“I think it will go a long way to making the property more attainable for people, so they can get a home that they can retire in, the heavy work is taken care of, the snow and the grass. I think that’s absolutely marvellous.”

Harding stated, “The land lease idea has been met with some scepticism by people in smaller towns that aren’t used to it. It’s more common in Guelph and Kitchener.”

Mayor George Bridge said, “I think if we get a couple projects like yours up and running we’ll have the opportunity to do more of them … and that’s how were going to get that attainable housing that we need for our seniors and for some of our youth even that are moving into the market.”

A motion to approve the minor variance to allow a reduced side yard setback was approved unanimously.