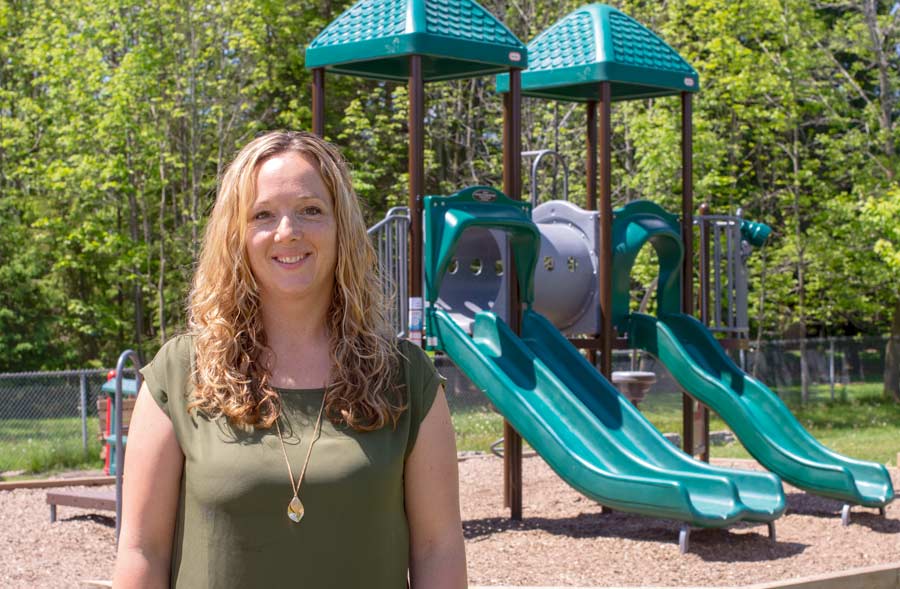 Fergus hero - Melissa Mulligan, a parent of three boys who attend John Black Public School in Fergus, received an Everyday Hero award from the Upper Grand District School Board in recognition of her fundraising efforts. Under her leadership the school community raised $63,000 to install two new playgrounds in the school yard. Photo by Jaime Myslik

FERGUS – Melissa Mulligan was just helping her children’s school fundraise for new playgrounds and that endeavour turned into an Everyday Hero award.

In the fall of 2016 Mulligan approached the school principal and a teacher and asked if they wanted to fundraise to bring a new playground structure to the school yard.

“There was a really old, rusty, not safe playground and it was only accessible to the kindergarten kids but there were no steps or anything to get up it, so it wasn’t even safe for the kindies,” she said. “They could only use it on their outside time when there was no other kids outside.”

Mulligan took on the fundraising responsibilities for the project.

“Melissa came in and … she was a force, she just proposed it, she was very diplomatic and she tried to encourage everybody, involve everybody, but she felt this was going to happen,” said nominator and school council member Catherine Shelton.

It was the fundraising that Mulligan attributes to her nomination for the Upper Grand District School Board Everyday Hero award.

She ran two duelling piano fundraisers, introduced a read-a-thon and a sled-a-thon within the school, and approached business and others to become a playground sponsor and get their name on a plaque.

“Throughout the project, Melissa worked tirelessly without a hint of ego or resentment,” her award nomination read. “She kept the team focused and on task.

“The school community is so grateful to Melissa for her work and support of this project and all the students.”

Mulligan didn’t know she was nominated for the Everyday Hero award and she was planning to nominate a teacher who was involved.

“I was trying to nominate her,” Mulligan said. “So then … [school council was] like ‘well we actually, as parent council, nominated you for your work and all the fundraising and all the volunteering you do.’”

Mulligan said she was very honoured by the award.

“It’s been awesome, kids coming up to me and saying thank you and adults in the community, it’s been amazing,” she said. “I’m going to say thank you first but it was definitely a group effort … I brought some crazy ideas out for some fundraising things that we did and … everything was new and nothing was met with anything but support.

“So that was pretty amazing just to see everyone come together and help.”

“You’re only maybe spending $30 per child whereas if you had to buy magazines and cookies and candles you’re spending 100, 200 dollars and the school’s only seeing a little bit of that,” she said. “These read-a-thons and sled-a-thons we’re getting 100 per cent of the money and it’s going right back to their kids.”

The sled-a-thon involves sledding down a hill and the read-a-thon is a two week period where students log all of their reading.

“It’s not just about the money, it’s about bringing things like the sled-a-thon – the kids … love it,” she said.

“Even the [Grade 7s and 8s] that are like sometimes we’re too cool but the smiles you see them coming down the hill (with), it’s pretty cool.”

For the read-a-thon Mulligan said teachers have told her students who don’t normally read are into reading for that two week period.

“They’re excited to try to win … a tablet, like a galaxy tablet or something,” she said. “We’ve got some pretty cool prizes that we get donated or brought in,”

An Everyday Hero award ceremony was held on May 29 at the E. L. Fox Auditorium at John F. Ross CVI in Guelph.

“The Everyday Hero Awards Selection Committee chose 11 finalists from a total of 29 exceptional and deserving nominees,” the board press release stated.