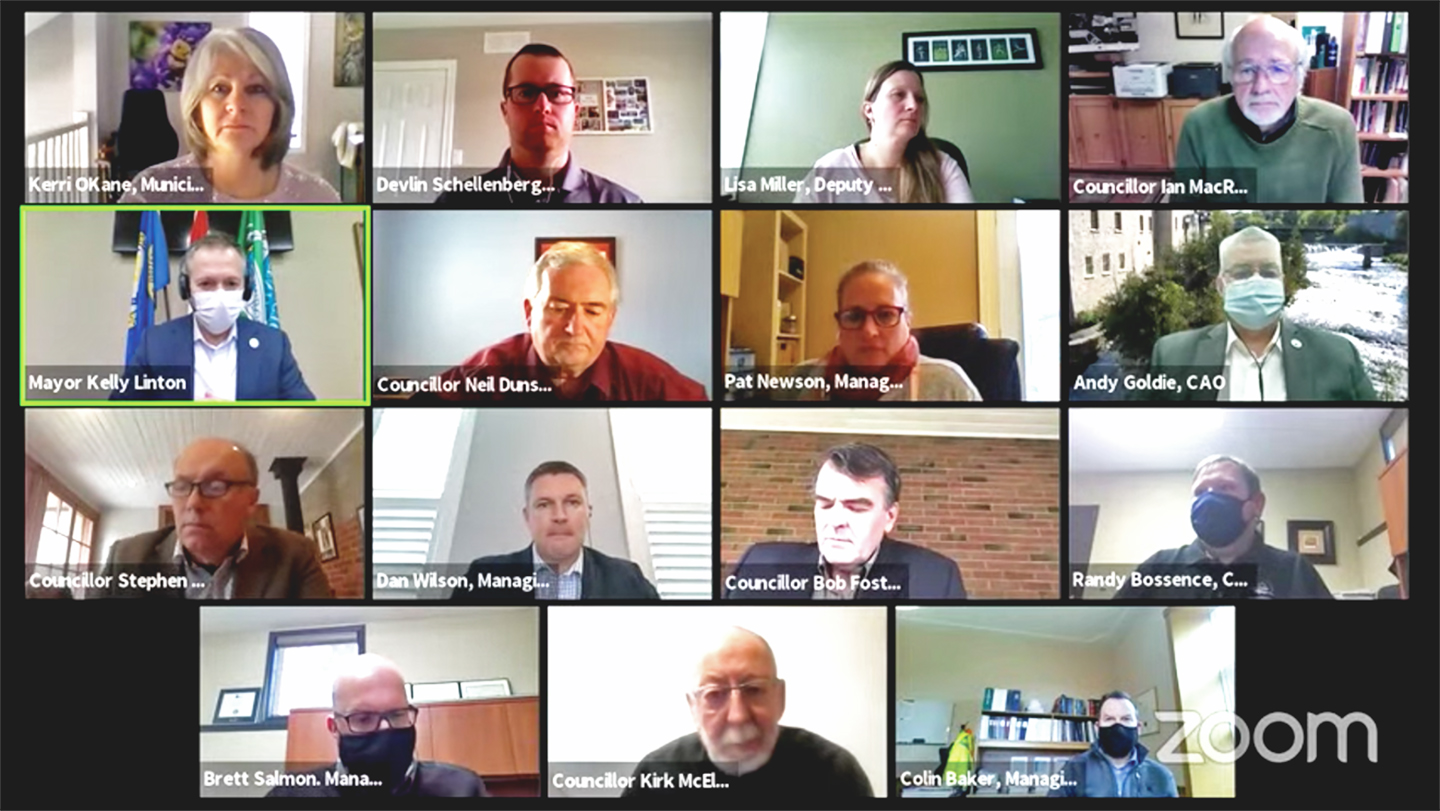 ELORA – Centre Wellington council had its shortest committee of the whole meeting by far on April 19.

It didn’t even last 10 minutes – and nothing was accomplished.

At the top of the meeting, councillor Kirk McElwain asked if a resolution attached to item 7.1 could be divided into two parts, so council could discuss and vote on the parts separately.

The resolution had to do with a recommendation that came from the township’s Healthy Growth Committee and its focus on attainable housing.

The first part of the resolution noted the committee “fully supports the County of Wellington’s 10-year Capital Plan” and recommends that council also support the county plan  “to increase investment in social and affordable housing, including $43.8 million in improvements and upgrades to its current social housing units and building new county-owned affordable housing units every third year.”

McElwain got a mover and seconder, but the vote to separate the two items resulted in a tie, with McElwain and councillors Bob Foster and Stephan Kitras voting in favour and Mayor Kelly Linton and councillors Neil Dunsmore and Ian MacRae voting against. A tie vote means the motion is defeated.

Councillor Steven VanLeeuwen was absent with “an employee emergency,” he explained in an email to the Advertiser on April 20.

Council went on to confirm the minutes of the previous meeting and then moved on to item 7.1.

Brett Salmon, managing director of planning and development, presented his report to council outlining the substance of the healthy growth committee meeting and its resolution.

The committee was asking council to endorse its decision to focus on attainable housing.

But before council could begin its discussion, clerk Kerri O’Kane reminded council it had not confirmed the agenda. It had only defeated McElwain’s motion.

And in the vote on the agenda, there was a three-way tie again, with McElwain, Foster and Kitras voting against and Linton, Dunsmore and MacRae voting in favour.

“You may want to adjourn the meeting,” O’Kane told council. “You have no agenda.”

Foster tried to explain why he supported McElwain’s motion to divide the two resolutions dealing with attainable housing.

But Linton cut him short.

“Without an agenda, there is no meeting. So meeting adjourned,” Linton said.

There were eight other items on the agenda that, with the meeting adjourned, were not addressed and remain in limbo:

In an interview April 20, Linton said he was “at a loss” as to why the three councillors voted against the agenda.

“I don’t know what their hang-up was; I don’t understand why they would vote against the agenda,” Linton said.

He added council would have had a full discussion on the Healthy Growth committee’s recommendation whether it was in one part or two, “and we have to move ahead with attainable housing. We have to take action, but we are being blocked.”

Linton said it’s fine for councillors to have differences of opinion, “but I wish we had more mutual respect for each other.

“Then we could wrestle through the challenging things and still get things done for people.

“When we waste our time like this, it’s an embarrassment. Our community deserves better.”

Linton said he’s tried a number of tactics to get council to work together and listed team building, the council code of conduct, council-staff relations guidelines and establishing common core values among them.

“But at the end of the day, if council can’t even agree on the order of discussion in a meeting, I’m at a loss,” he said.

McElwain told the Advertiser on April 20 he didn’t expect that the meeting would not proceed.

“I didn’t really vote against the agenda, I just wanted those two points to be separated,” he said, referring to the recommendations from the Healthy Growth committee.

“I absolutely would have voted in favour of supporting the county’s position on affordable housing. And I might have supported attainable housing too.”

McElwain said putting the two recommendations into a single motion would force council to either support them both or vote against them both.

“I don’t understand why three councillors voted against my motion. It was a no-lose situation,” he said.