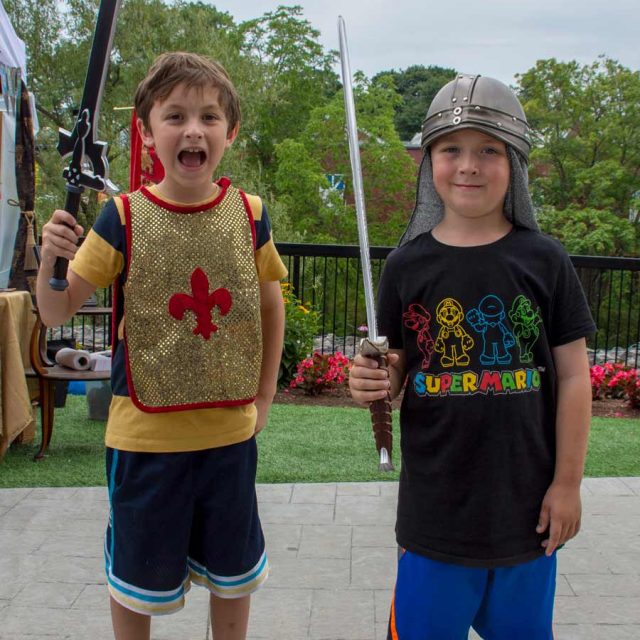 Fergus siblings Liam and Elana Doherty dressed up for the occasion at the 2019 Medieval Faire. Advertiser file photo

FERGUS – The Medieval Faire will be back in Fergus for the first time since 2019, and there will be no shortage of things to do downtown on July 23, according to event organizer Debb Greer.

The event was created in 2018 with the goal of bringing more life to downtown Fergus.

Organizers Greer, Tala Jenkins and Nathalie McNeill, owner of The Red Door Restaurant and The Fountainhead Health Store, tried to think of what they could do to encourage tourism.

“That’s how it all started, and it just went crazy from there,” said Greer.

The “momentum was growing,” said Greer.

But then the COVID-19 pandemic hit, forcing the cancellation of the event in  2020 and 2021. Despite the setbacks, organizers are expecting a large turnout this year.

The idea behind spreading the faire out around downtown is to get people exploring the area, Greer added, “to see the beauty of Fergus, because Fergus is such a beautiful town.”

The bulk of the faire is running during the day,  from 11am to 5pm, but there are a few evening celebrations in store as well:

The faire is a free event, but there are a few attractions event-goers may want  to look into prior to the event, such as the ghost walk, medieval feast and the psychic faire in gypsy alley. Walk-ins are accepted for the latter event, but appointments can also be arranged by contacting the Bookery.

“There’s a lot of moving parts,” said Greer of this year’s event.

She added the performers are a tight-knit community, so organizing may not be as daunting as it could seem when word gets out about the faire.

Planning typically begins in January, Greer explained, when she and the two other organizers meet at the Red Door and plan over dinner. She noted organizers will order food from a different Fergus restaurant each time they have a meeting.

Maps will be available at the faire to guide event-goers to all of the attractions in downtown Fergus.

Volunteers are needed to help run the event, said Greer. Contact the Bookery for more info.