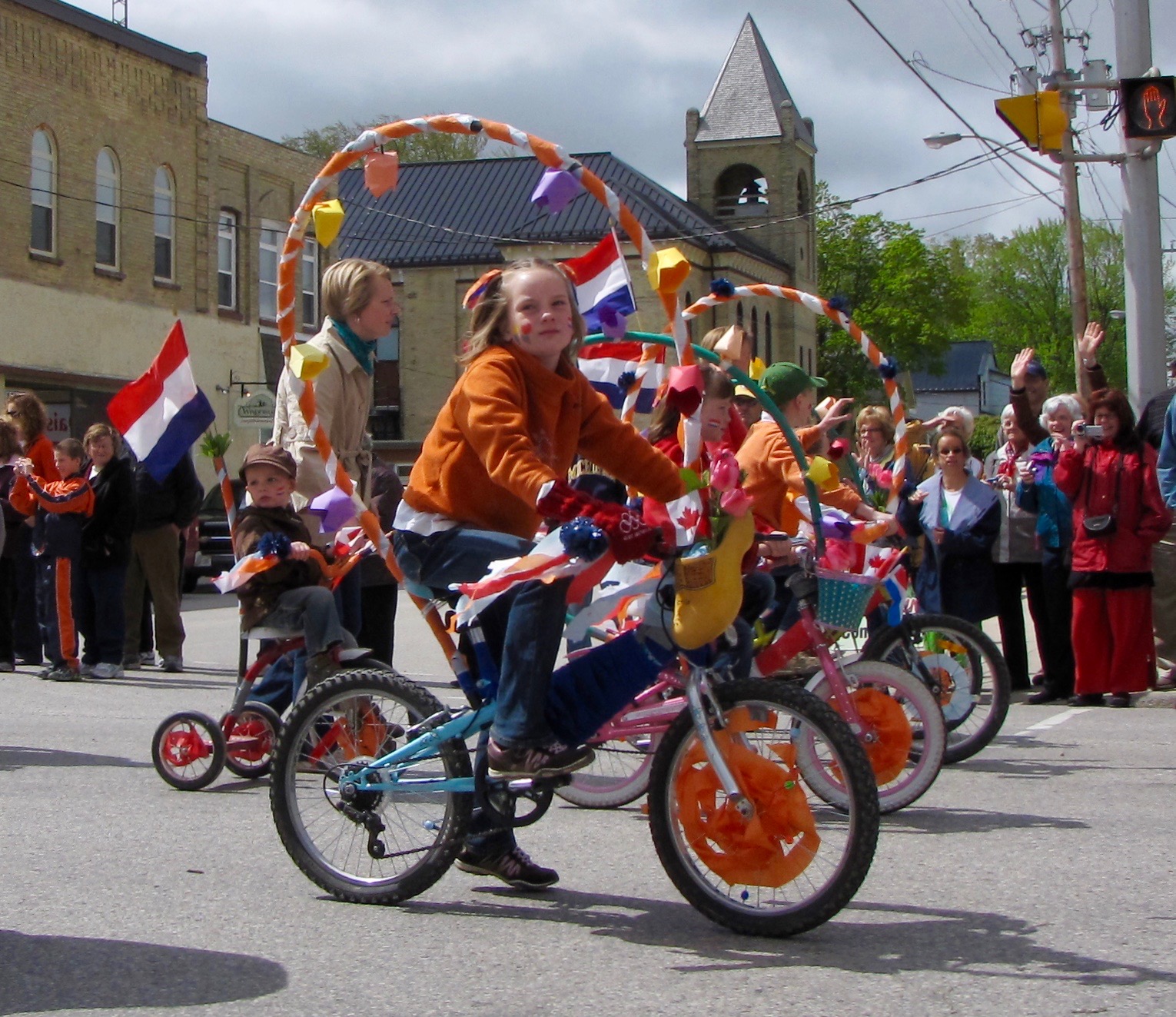 Members of the DeVries family participated in the Drayton Tulip Festival parade in 2010. Organizers were planning another large Tulip Festival this year to recognize the 75th anniversary of the Liberation of the Netherlands, but have been forced to postpone it until next year due to the COVID-19 pandemic. Advertiser file photo

DRAYTON – The COVID-19 pandemic may be forcing the cancellation of a ton of local events, but it hasn’t diminished the importance of recognizing significant historical milestones.

The Drayton Rotary Club and members of Mapleton’s Dutch community had planned a May 9 Tulip Festival to commemorate the anniversaries, but due to the pandemic, the festival has been rescheduled to May 8, 2021.

“We’re sad that we couldn’t celebrate and have this special time … but at the end of the day, it’s just giving us an extra year to make this even better and more special,” said Rotarian Lorrie Spaling.

She explained the festival is important “because there are so many Dutch immigrants here in Drayton and it’s a large Dutch population.”

The goal was to make the festival a day for family.

“Just a day of coming out and celebrating this and you don’t have to be Dutch descent, that’s for sure, because I’m not and I just think it’s so important that we embrace part of the Canadian and the Dutch … history,” Spaling said.

“And that also explains to a lot of people why the tulips are such a big deal.

“I just think so often we just take everything for granted and it’s nice for the younger … people of Dutch origin  … [to] learn more about why their parents chose Canada and that kind of stuff.”

The anniversary is especially important for Mapleton councillor Marlene Ottens,  whose parents were teenagers in the province of Drenthe, Netherlands during the Second World War.

“Commemorating the 75th anniversary of the Liberation of the Netherlands is important because many of the people with first-hand knowledge and experience of that time are no longer with us,” she stated in an email to the Advertiser.

“As time moves on, historical events can become distant memories or fodder for re-enactments, rather than the important catalysts of change that they actually were.

“It boils down to this: if the Netherlands hadn’t been liberated, I probably wouldn’t be here.” 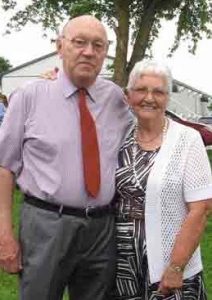 She said her mother, Grace Zoer (nee Bos), often saw soldiers go by the family farm. She was nine years old when the war began. Some of the teenage boys on neighbouring farms went into hiding because the Germans would take young Dutch men to work in their factories, as most German men were in the army.

“One of her neighbour families went into hiding, and my mom’s family went to their house occasionally to remove valuables for safekeeping,” Ottens said.

“Sometimes the Germans would randomly burn down a house while looking for someone, so my mom’s family wanted to save what they could for their neighbours.

“That neighbour’s house wasn’t burned, and that family returned safely after the war was over.”

Ottens’ late father, Hank Zoer, told her his family filled a tin with coins and jewelry and buried it in the stable.

“His father showed him where it was hidden ‘just in case,” Ottens said.

Her mother’s family also hid food and winter clothes and buried papers in a field.

Ottens said the final year of the war was the hardest because of food shortages in the city and the very cold winter. People in the Netherlands would burn whatever they could to stay warm – doors, furniture and even floorboards.

“There was very little food and city people would walk for hours to the farmers and offer valuables in exchange for food,” she explained. “Nobody had much to spare, but the city people always managed to barter for something.

“It was a challenge, however, to protect it from the enemy soldiers on their long walk back. Sometimes their carts had false bottoms.”

Some families even took in children “even though it was a big sacrifice to share what few supplies they had,” Ottens said.

German soldiers also passed through and took food. Ottens remembered hearing one story about a soldier coming to her mother’s house and grabbing two freshly baked loaves of bread.

“My grandmother snatched one back, angrily, and said, ‘We have to eat too,’” Ottens said.

“He could have shot her right there, but didn’t.”

“They took over a bedroom and ate dinner with the family,” Ottens said. “The family had little choice in this.”

“They heard the Allies were winning, but out in the country, it took a bit longer to see evidence,” Ottens said. “Suddenly dozens of Canadian tanks and hundreds of Canadian soldiers were present.”

“People emerged from their homes, cheering with relief.”

The Dutch citizens who were hiding in barns, basements or secret rooms also came out.

“The soldiers handed out chocolate bars and cigarettes – great treats after all this time,” Ottens said. “They also handed out new things like canned corned beef and Cheez Whiz and, best of all, white bread.”

The Netherlands was officially liberated on May 5, 1945. Grace was 15. She and Hank met a few years later and were married when they were 22 and 24 respectively.

“Multiply that experience by the thousands, and you can see the impact,” Ottens said.

“It’s especially important to commemorate [the 75th anniversary] here, in Canada, because Canadian soldiers were the ones who liberated the Dutch.

“That’s why so many Dutch people chose to emigrate to Canada in the post-war years; because they had such a fondness for this country due to the liberation.”

Ottens’ parents moved to Canada a month after they were married.

“They immigrated to the Drayton area because they were sponsored by a Dutch farmer here,” Ottens said.

It’s stories like this the Drayton Tulip Festival committee wants to highlight during the “75+1” anniversary of the Liberation of the Netherlands. 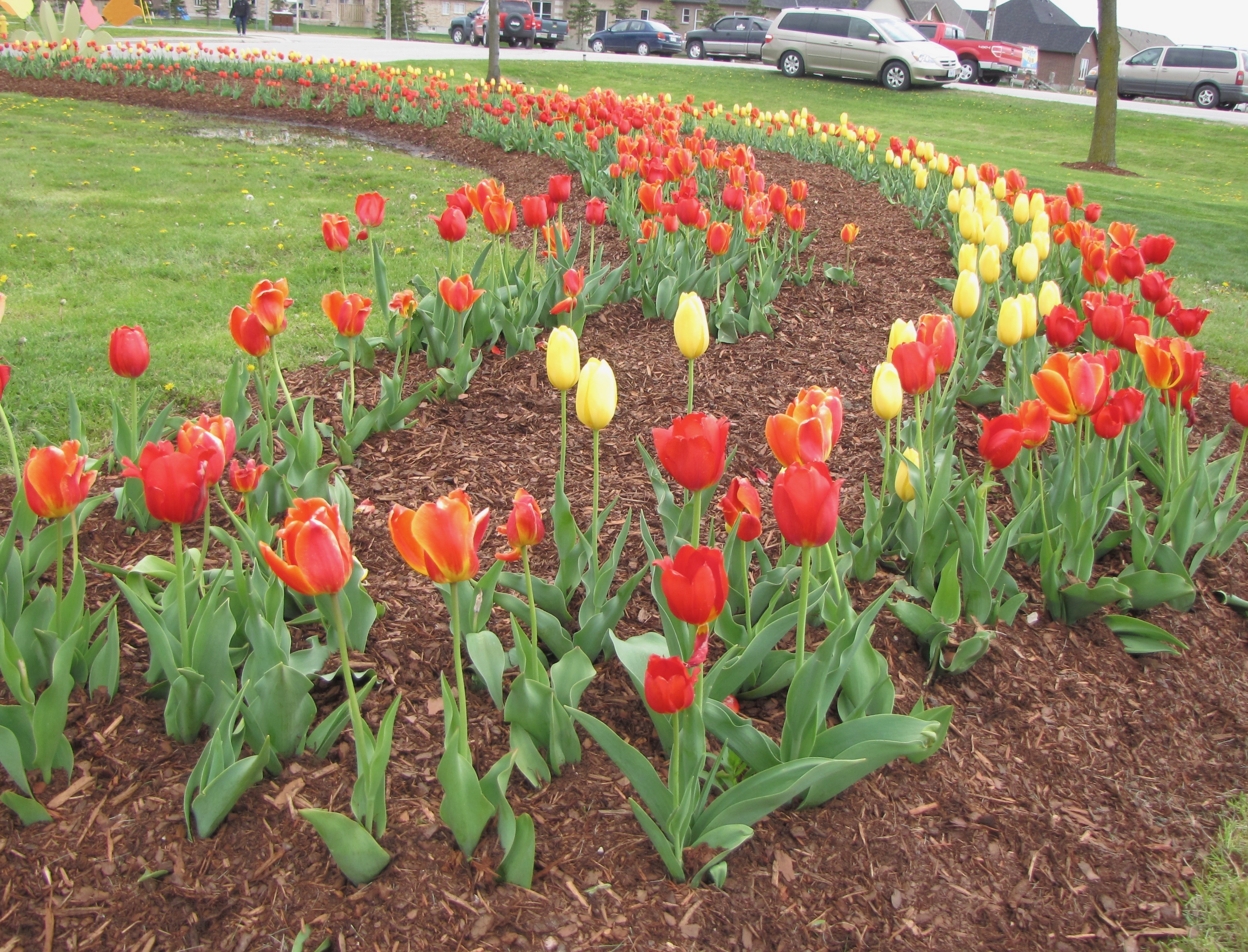 Organizers planted hundreds of tulips in front of the PMD Arena for the 2010 festival in Drayton, which recognized the 65th anniversary of the Liberation of the Netherlands. Advertiser file photo

The festival on May 8, 2021 will begin around 1:30pm with a parade led by the Drayton Legion and the laying of wreaths at the cenotaph, as well local churches offering a service at the cenotaph, Spaling explained

Then the festival will kick off around 2pm, with fun for the whole family.

Spaling said there will be Dutch dancing, a movie compiling memories of people within the Drayton community of the Liberation of the Netherlands, a car show, a shuffleboard contest, a cooking contest, a floral arrangement contest and a photo booth with a tulip and windmill background where people can dress up in traditional Dutch clothing.

Then the day will conclude with a big street dance.

“Once the immigration started coming here, there got to be a lot of Dutch people and they’re such a prominent part of our society and it’s nice for everyone, even the young kids of Dutch origin,  for them to even understand and to learn about this,” Spaling said.

To help prepare for the May 8, 2021 celebration, residents of Mapleton Township are encouraged to plant tulip bulbs (if possible include red, blue and white, the colours of the Netherlands flag) this fall so they can participate in the best yard decoration contest during the festival.

“I encourage everybody to go online and kind of read about [the Liberation of the Netherlands] if they want to participate and then go from there,” Spaling said.

“That makes it even more exciting that you know why you’re doing it and then it maybe offers you the opportunity to put in colours accordingly how you think.”

Spaling hopes the 2021 festival will bring people together.

“We want it to be a community thing and I find … as community grows you become so disconnected and I’m hoping and praying that this is something that will pull the community together to come out and have a good time,” she said.

She added, “Life is short and if you don’t come and support and be together as a community then you’re always left out and you don’t feel that you belong anywhere.

“We’re small. We don’t need to have that feeling.”