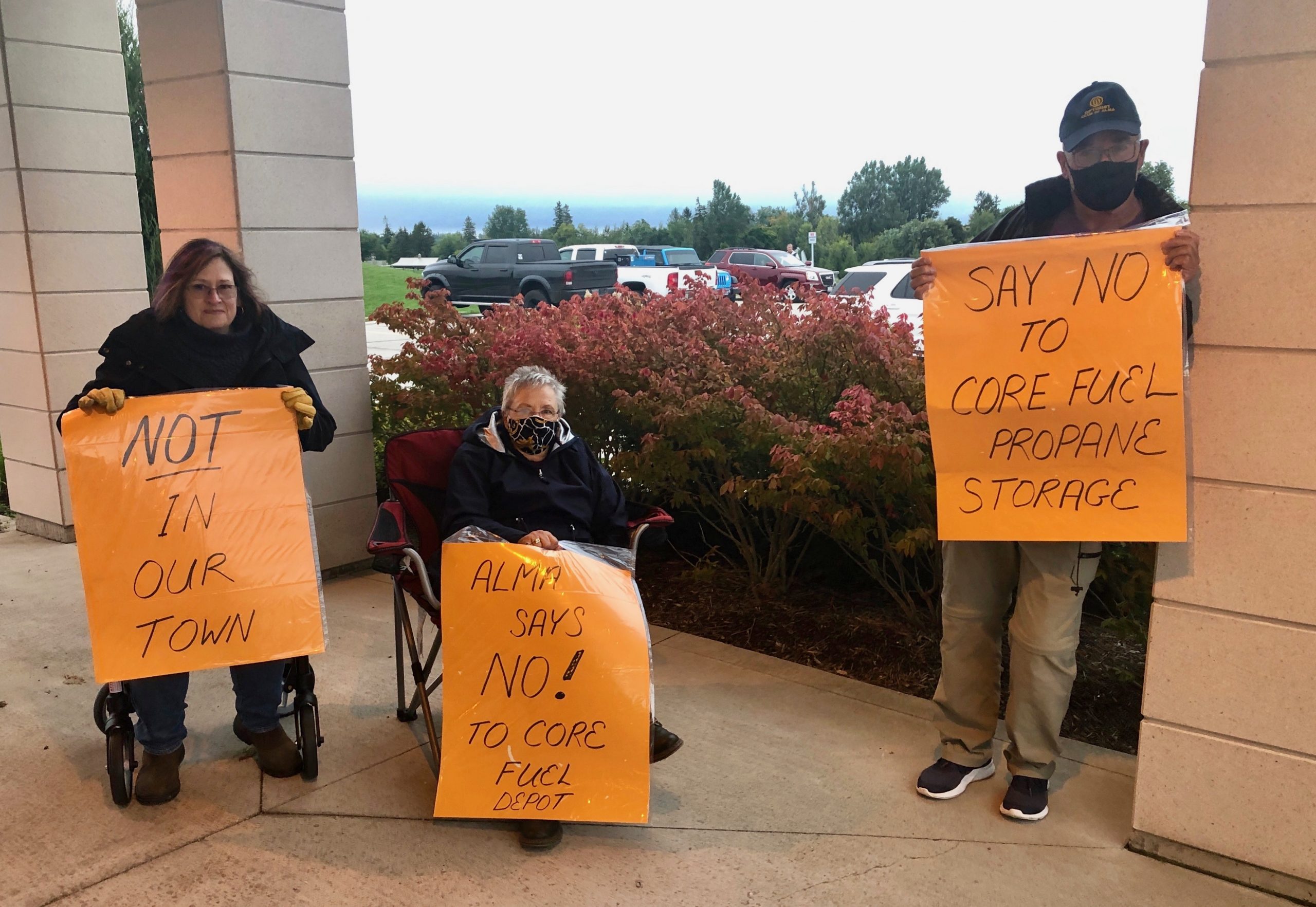 Several placard-carrying local residents protested a proposal for a bulk propane storage facility in Alma outside the Mapleton council meeting, held at the Alma Community Centre on Sept. 8. Council turned down an application for a zoning change that would have allowed the facility. Photo by Patrick Raftis

ALMA – Citing strong community opposition, Mapleton council has turned down a request for a zoning change that would have allowed an underground bulk propane storage facility at the Core Fuels property here.

Local residents filled most of the available seats at the Alma Community Centre for the Sept. 8 meeting, with a handful more waiting outside the meeting.

The hall capacity was limited to 50 people, including council members, township staff and media as well as the public gallery, due to provincial pandemic restrictions.

The zoning amendment under consideration would have allowed Core Fuels to add a provision for “bulk fuel storage” to the site-specific highway commercial zoning of a property at 6976 Wellington Road 7.

Bulk fuel depots are currently only permitted in a general industrial (M1) zone.

The applicant also owns the neighbouring site at 6974 Wellington Road 7, which has a Fast Stop gas refuelling station for public use.

Core Fuels was planning to add four 226,800 litre underground propane tanks to the site for the storage and distribution of propane and to relocate their bulk storage operations to the Alma site.

“Approval of this zoning amendment would bring almost one million litres of dangerous, flammable propane into our small, residential community, nestled right beside our homes,” stated Amanda Reid, spokesperson for Concerned Citizens of Alma (CCA), which presented council with a petition signed by 210 local residents opposing the development.

“It would bring with it risks of fuel leaks, environmental damage, explosion and fire.”

Reid questioned “risk contours” provided by Core’s consulting firm, Beatty Petroleum, at a July 14 public meeting, stating they were not prepared by an engineer and were based on only the two tanks planned for the first phase of the development.

She said the contours are not an accurate representation of the risk, especially when underground storage is a new concept within the province and the country.

“Why should the community of Alma be a guinea pig for such a facility?” Reid asked.

The CCA delegation also raised concerns about increased truck traffic in the hamlet, potential impacts on the water table, and the capacity of the local volunteer fire department to respond to a major incident.

”The community of Alma is primarily protected by the Elora fire department in Centre Wellington, a fire station that is staffed by 57 volunteer firefighters,” Reid stated.

“How can this station quickly and effectively respond to a large propane fire?”

Alma resident Heather Smith asked that council “not let your decision be influenced by the amount of money that Core Fuels has already spent in preparation for the bulk fuel depot.”

She said the facility does not fit under existing provincial policies or Wellington County’s official plan.

“The first underground propane storage facility in Canada should be considered experimental and precedent-setting. Four tanks of 60,000 gallons each might be the second largest facility in Ontario,” Smith stated.

She stressed she feels the proposed facility is too close to residential neighbourhoods.

“There isn’t sufficient distance or physical barriers to protect people from a propane blast or from odours and noise,” she said.

Smith added she believes regulations would allow for the proposal to be located in a more rural area.

She said the provincial growth plan and policy statement, as well as the county official plan, “collectively lend support for designating propane as an agriculture-related use, so that agricultural-zoned land could be rezoned for a bulk fuel depot.

“The location could be at a suitable set back from a residential neighbourhood,” Smith added.

James Core of Core Fuels said safety was his company’s main concern in planning for the project.

“When we began this project we felt that safety was the most important issue that we must deal with before any other,” said Core.

“We decided that putting the tanks underground would be the safest way to go. This is safer because the tanks themselves will not be exposed to the potential hazards that can occur in an emergency like heat from a fire.”

Core suggested an underground facility would also be more “aesthetically pleasing for the neighbourhood.

“We believe that we will be going to great expense to be a good corporate citizen and good neighbours,” he stated.

Core noted his company is a small family operation looking to expand.

“We have safely been delivering petroleum products for almost 50 years.

Core pointed out that risk contours provided by his consultants are for a typical bulk-loading facility and suggested more detailed engineering work conducted following approval would indicate a reduced risk level.

“It is our indication that this radius will be greatly reduced because we have decided to go with underground tanks,” Core stated.

Core also said his company “has total faith” in Mapleton Fire Chief Rick Richardson and the local fire department’s ability to “address any emergency that may arise.”

He added most bulk loading facilities are in rural areas protected by volunteer fire departments.

“Our experience has been that these departments are well trained and prepared for whatever may come their way,” Core said, adding his company would work with the department to provide any necessary training and site-specific safety measures.

Richardson pointed out that in addition to Centre Wellington firefighters, personnel from Mapleton Fire Rescue stations in Drayton and Moorefield would respond to any structure fire in the area, making more than 100 firefighters potentially available.

Core also explained that a high-pressure natural gas transfer station is located across the road from his company’s property and high pressure gas lines have existed throughout the hamlet “for years without incident.” 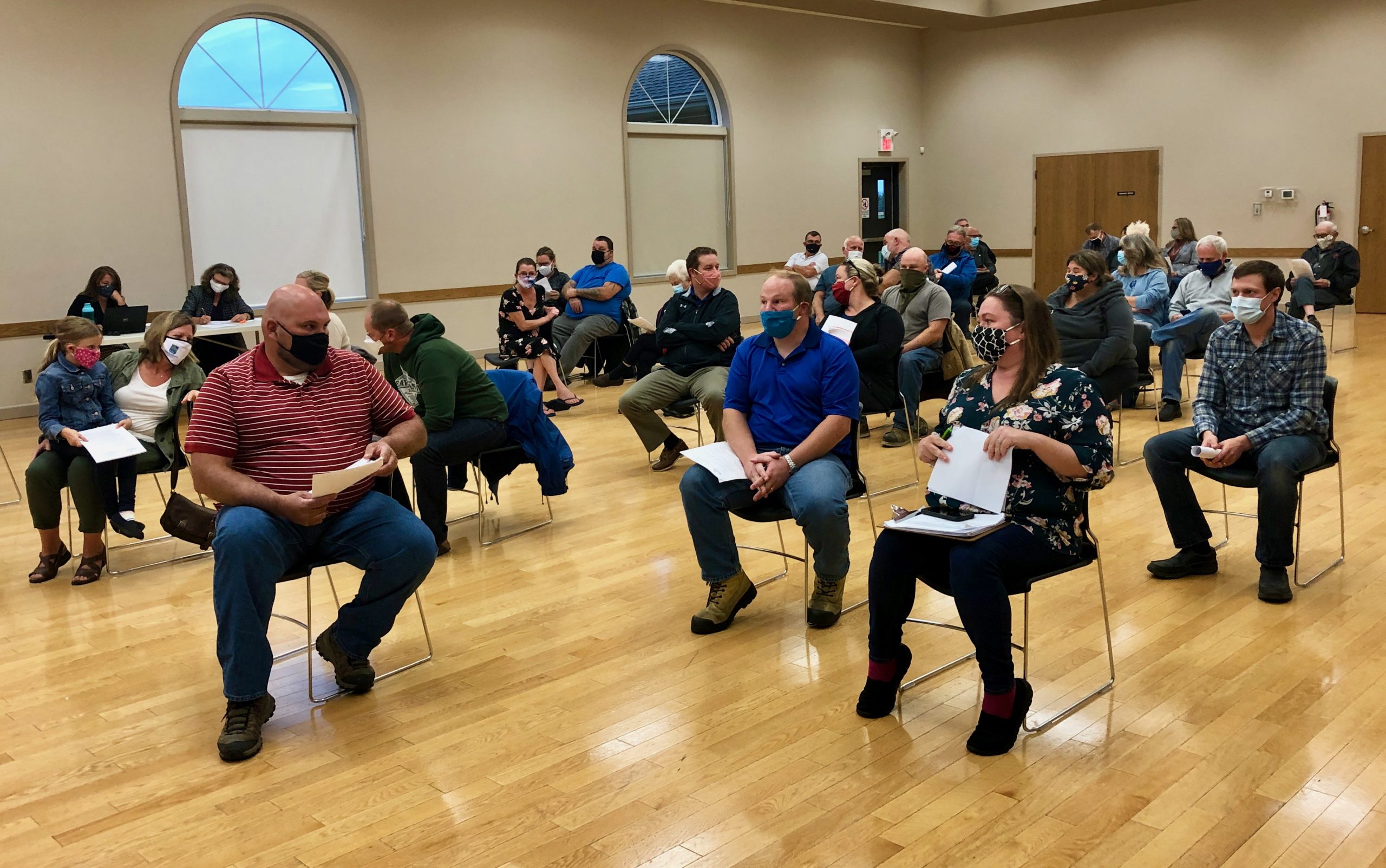 Local residents filled most of the available seating at the Alma Community Centre for the Sept. 8 Mapleton council meeting. Council turned down an application for a zoning change that would have allowed a propane storage facility in Alma. Photo by Patrick Raftis

He added, “Our facility will be every bit as safe as the gas utility that already exists.”

He also noted propane is not considered a marine pollutant “and therefore does not represent a risk to the water table in any way.”

Core stressed, “This project will not proceed until the risk assessment is approved by engineers and TSSA. All safety concerns will be addressed through this process.”

“I think very rarely we get this much feedback on an application … It’s very rarely politics come in on a decision like this,” said Martin.

“I think Core Fuels, as an applicant and partner in this process, has done what we needed them to do.”

Martin continued, “For me, what this really comes down to is, it’s not about the applicant. It’s more about the fit in the local community.”

“The local folks have spoken up through petitions, through emails; I got eight phone calls on this as well.

“It doesn’t necessarily matter what the actual facts are … for me with the lack of support of the local residents I don’t think I can support this.”

Martin suggested the facility might work elsewhere in the township.

“Is there an opportunity here within Mapleton that a potential site could be found?” he asked.

CAO Manny Baron said staff had made some “very preliminary inquiries in anticipation of the question.

“We had someone that kicked the tires and there’s a couple there that would be interesting,” said Baron. 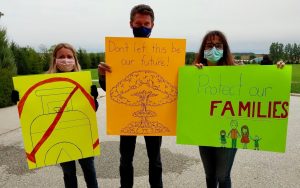 Residents protested a proposal for a bulk propane storage facility in Alma outside the Mapleton council meeting, held at the Alma Community Centre on Sept. 8. Submitted photo

Councillor Marlene Ottens said, “I’ve never read so much information on propane in my life … and kudos to all the rest of you for your collectively lobbying that was very impressive and, I believe, effective.

“Core fuels is a good responsible businesses and I really don’t’ like seeing these kinds of efforts to advance and progress stymied in any way, but I agree with councillor Martin that it’s all about fitting in the community … there are a lot of valid concerns here.”

Ottens added, “We’ll see where the road takes us, but I think it’s all about finding the right location.”

However, he added, “For me, when you start drawing (risk) contours over other people’s property it goes from NIMBY (not in my backyard) to legitimate concerns.”

Councillor Dennis Craven, commended Core Fuels “on the amount of work they put into this.”

Yet he stated, “One of the most important things you do as a councillor is you listen to your people and I think if we listen to people tonight, we’re going to have trouble supporting it.”

A motion to approve a bylaw allowing the zoning change was defeated in a unanimous recorded vote.

“We know you’ve tried to put this forward as best you could by putting them underground,” Mayor Gregg Davidson told Core.

“But as council has said, we don’t feel it is the right fit. It is too close to the residential community for this size of a propane facility.”

Davidson added, “We will work with you, sir, if you choose.

“Please talk to Mr. Baron and will work out something else.”

“Thank you for your time,” Core responded.

Contacted by the Advertiser on Sept. 9, Core declined to comment on the decision.

“We respect the citizens and the council’s decision and we’re just going to move on,” Core stated.