PALMERSTON –  The community lost an eloquent wordsmith and passionate citizens’ advocate with the passage of Robert Cherry last week. 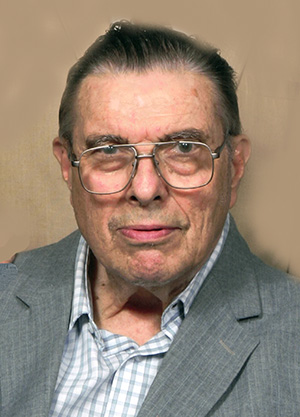 Cherry, 93, died at the Royal Terrace Nursing Home in Palmerston on April 30.

Cherry, who for many years operated a family variety store, was also a longtime columnist for local newspapers, the Palmerston Observer and the Minto Express.

Town of Minto councillor Ron Elliott, a past mayor and council in the former Town of Palmerston, said he first knew Cherry from visits to the store he ran with his brother, John.

“My daughter said to me the other day … you know Bob Cherry was way ahead of his time. That was the only store you could phone in and Bob would go around the store, pick the groceries up and deliver them to your house,” said Elliott.

“I guess Zehrs and all those big stores are not even close to when Bob Cherry started rolling.”

As a local politician, Elliott recalls being involved in issues Cherry covered in his popular column The Pen is Mightier than the Sword.

“When I was on council … he would always phone you, and he was polite and stuff, but he always had an opinion and he’d debate with you over the phone,” Elliott recalled.

As a columnist and prodigious writer of letters to the editor, Cherry waged a decades-long campaign to have traffic lights installed at Palmerston’s main intersection.

“The big thing was the light,” said Elliott, who remembers discussing Cherry’s concern with Minto’s first mayor Bill Lawless,  telling him, “It’s not necessarily traffic that’s the problem. I think he’s concerned about people walking across the street.”

Minto council at that time installed a flashing yellow light that failed to assuage Cherry’s concerns.

“He said ‘That yellow light’s okay Ron, but it’s not really what we need,’” said Elliott.

Today the corner of Main Street (Wellington Road 123) and Brunswick Street in Palmerston features a pedestrian crossover with a push-button-activated amber flashing light to draw motorists’ attention to pedestrians and an overhead sign for greater visibility.

“I believe the light we have today is indirectly because of Bob,” said Elliott, who noted Cherry raised the issue again a few years ago, around the time Wellington County was installing the new style pedestrian crossovers on some local roads, including Toronto Street in Palmerston.

“Bob had his facts and he brought them forward, but he never back-doored you.”

Cherry also wrote letters to newspapers across Ontario about issues of local, provincial and national concern.

“He was a true gentleman. He cared for his community. He wanted to see the best for Palmerston, and I think for citizens as a whole,” he added.

A private family service was held for Cherry in Bethesda Cemetery.