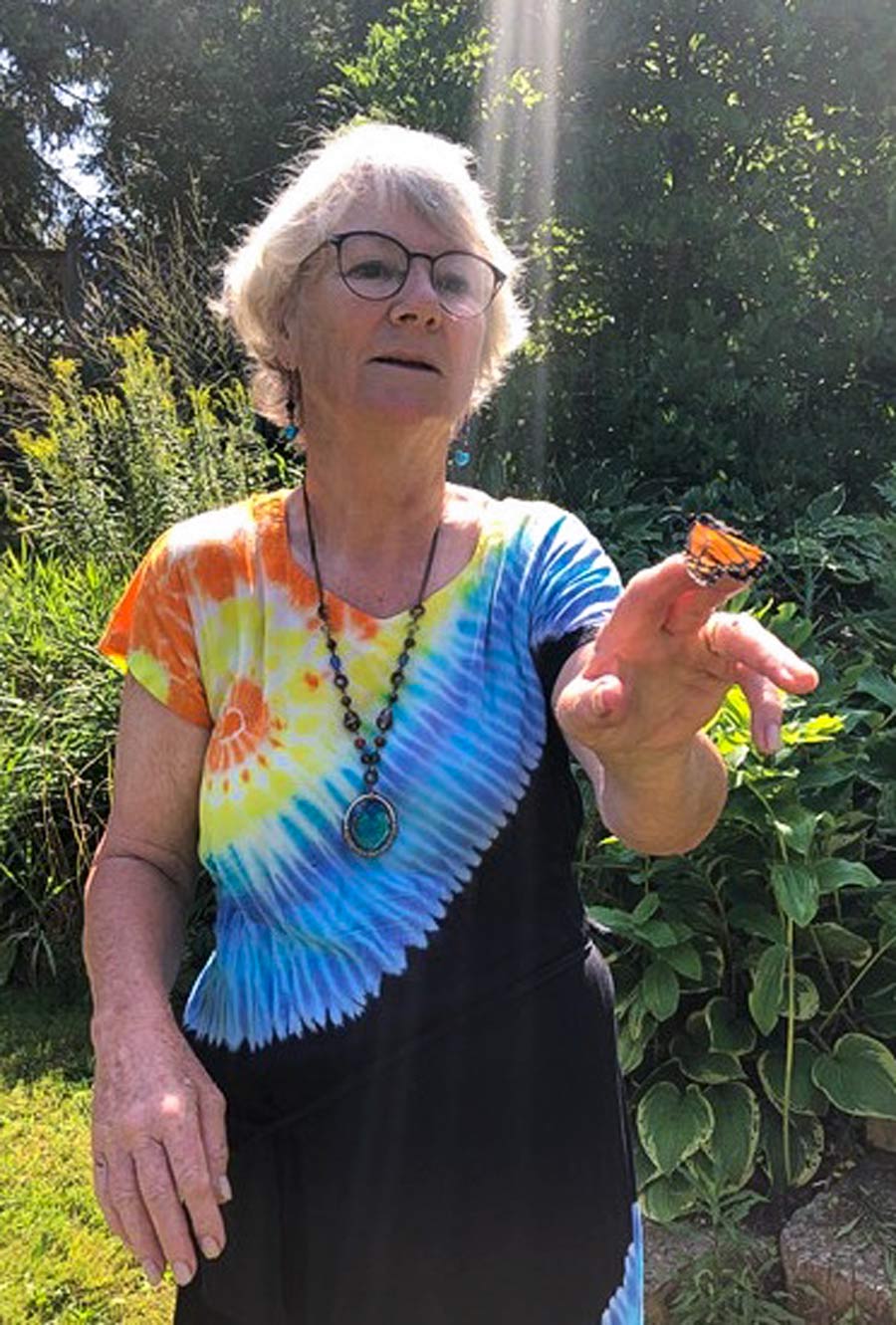 “Monarchs are an endangered species in Canada, and in the U.S. it will be decided in December whether they are classified as endangered there as well,” Strachan Johnson said.

“Their extraordinary migration to Mexico and back the following year is enough for me to consider them worth protecting.

“Add to that the almost miraculous metamorphosis from caterpillar to butterfly within the chrysalis. Then add the thrill of releasing a beautiful wild creature into the sky, and know that you have made a difference. There’s no question for me that this is worth doing.”

This year Strachan Johnson found her first caterpillar on July 9 in a vacant lot and she currently has six caterpillars from eggs she collected on Aug. 28 and four chrysalises.

“My last butterfly will likely go sometime mid-October,” she said. “Because of the frost we had three nights last week, I have taken the precaution of bringing them into the house for the night, and then put them back in our screened porch when the sun comes out.”

There are four generations of monarch butterflies every summer.

“Four different butterflies go through the stages of egg/caterpillar/chrysalis/adult butterfly during each summer, (which can take between 22 to 37 days, depending on the temperature) and it is the fourth generation that flies south and lives there until March or April,” Strachan Johnson said. “They then lay eggs, and those butterflies fly north and begin the cycle over again.” 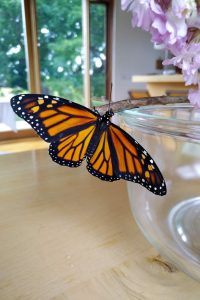 Everton is a particularly good environment for monarchs with pasture, forests and empty lots. Milkweed also grows along the side of the road so it’s easy to check the plants for eggs and small caterpillars.

“I carry a small food carton with an aeration patch of tulle sewn into the lid when I am out collecting, to make it easy to carry them home, and so that no eggs get knocked off as I walk,” she said.

Others within the community, including Joy Roberts, have also started participating in monarch collection.

“Thanks to Susan, I can now spot even an egg or the tiniest caterpillar,” Roberts said. She has released 10 monarch butterflies this season and Strachan Johnson has released 59 so far.

Although progress has been made, a lot remains to be done,” Roberts said. “It is still estimated that in 20 years the monarch could be extinct.

“It is the only butterfly known to make a two-way migration as birds do. Since they cannot survive the cold winters of northern climates, various environmental cues tell them it’s time to travel south, with some flying up to 3,000 miles to reach their winter home.

For those looking to help nurture monarch butterflies next year to protect them from predators, here are a few tips.

Start looking at milkweed for eggs and caterpillars in early July. When an egg or caterpillar is found take the whole milkweed leaf by breaking it off at the stem and put it in some sort of container with holes to take it home. When home, wash the leaf carefully and place it in a clean container with aeration to help prevent parasites.

“I personally like to cut out a hole in the lid and stitch or tape some tulle in its place, so that caterpillars can’t escape,” Strachan Johnson said. “I once had a caterpillar disappear and a butterfly flew out from under the kitchen sink two weeks later.”

Once the butterfly emerges from the chrysalis, after about eight to 15 days, it’s time to release it into the wild.

“This is the special time for me,” Strachan Johnson said. “If you place a finger just under the butterfly’s head, like touching the breast of a budgerigar, it will climb onto your finger.

“If you then place your other hand loosely over it, you can carry it outside into the sun and wait for it to fly away.”