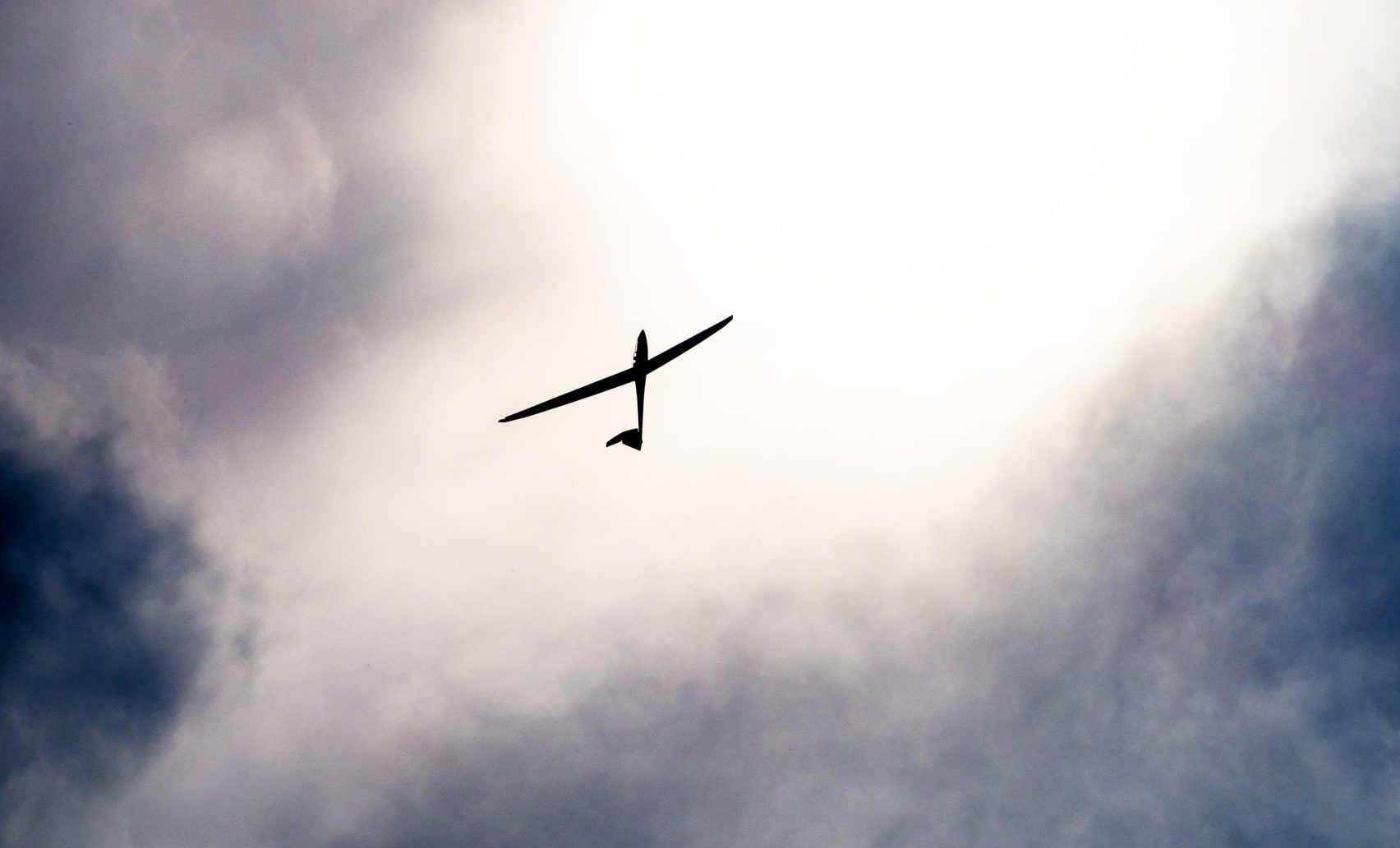 York Soaring Association members are speaking out about safety concerns with the proposed location of an Xplornet telecommunications tower. The Wellington Advertiser examines what's at stake and the convoluted tower approval process. (Unsplash image)

WELLINGTON NORTH – Members of the York Soaring Association, with its airfield located east of Arthur on 5th Line, are speaking out about safety concerns with the proposed location of a 45-metre (148-foot) Xplornet telecommunications tower.

Canacre, a Toronto-based development consultant acting on behalf of New Brunswick-based Xplornet, notified Wellington North staff of the proposed tower with a project package in June, later submitting letters to council on Aug. 9 announcing it wanted to erect two towers within the township.

Wood regularly takes to the skies from the club’s airfield and is also on its board of directors. He reached out to the Advertiser with his own concerns and perspective to share.

“[It’s] really close to our runways and it’s right underneath the approach to our main runway—right underneath it,” he said, exasperated and at a loss to understand why the tower would need to be so close.

If the wind is blowing from the south, an engine-less glider, being towed by a small single-engine plane, will take off runway 3214 into the wind, toward Belwood Lake and the Grand River, with the tower to the pilot’s left.

“When we go down the runway we get off the ground, we get up about 100 feet or so and then a climbing turn either to the left or to the right,” Wood explained. 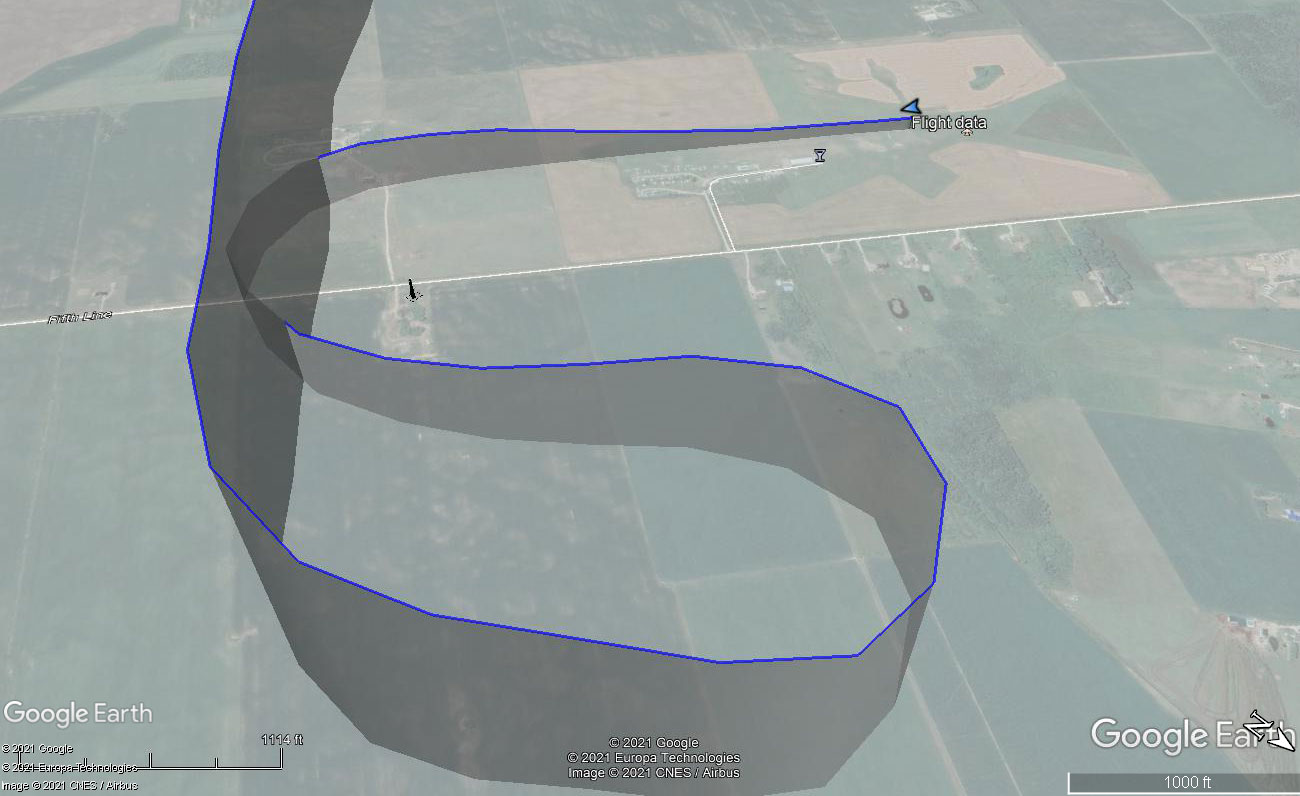 A computer tracing of a glider’s flight path is shown with a simulated tower image at its proposed location at 8316 5th Line in Wellington North. Where the blue tracing turns to grey, planes would be flying at around 200-feet from the ground. (Submitted image)

Wood said the tower would be a “big factor” during the first 300-feet after taking off, when the ascent is most critical.

And if something were to go awry, Wood says pilots wouldn’t have the option of a left-turn due to a 148-foot-long piece of metal in the sky.

If the wind is blowing from the northwest, planes would take off in the other direction down 3214, away from the tower, but could end up flying over top on their “base leg approach” to land.

“You’d be real close to it, maybe over it … it would be an obstacle that would be fraught with unsafe possibilities,” Wood said.

Either way the wind blows, Wood believes having the tower in its proposed location is “absolute madness.”

“We don’t object to people getting a better signal … but where this thing is proposed to be placed, it’s just disastrous from the point of view of our operation,” Wood said. 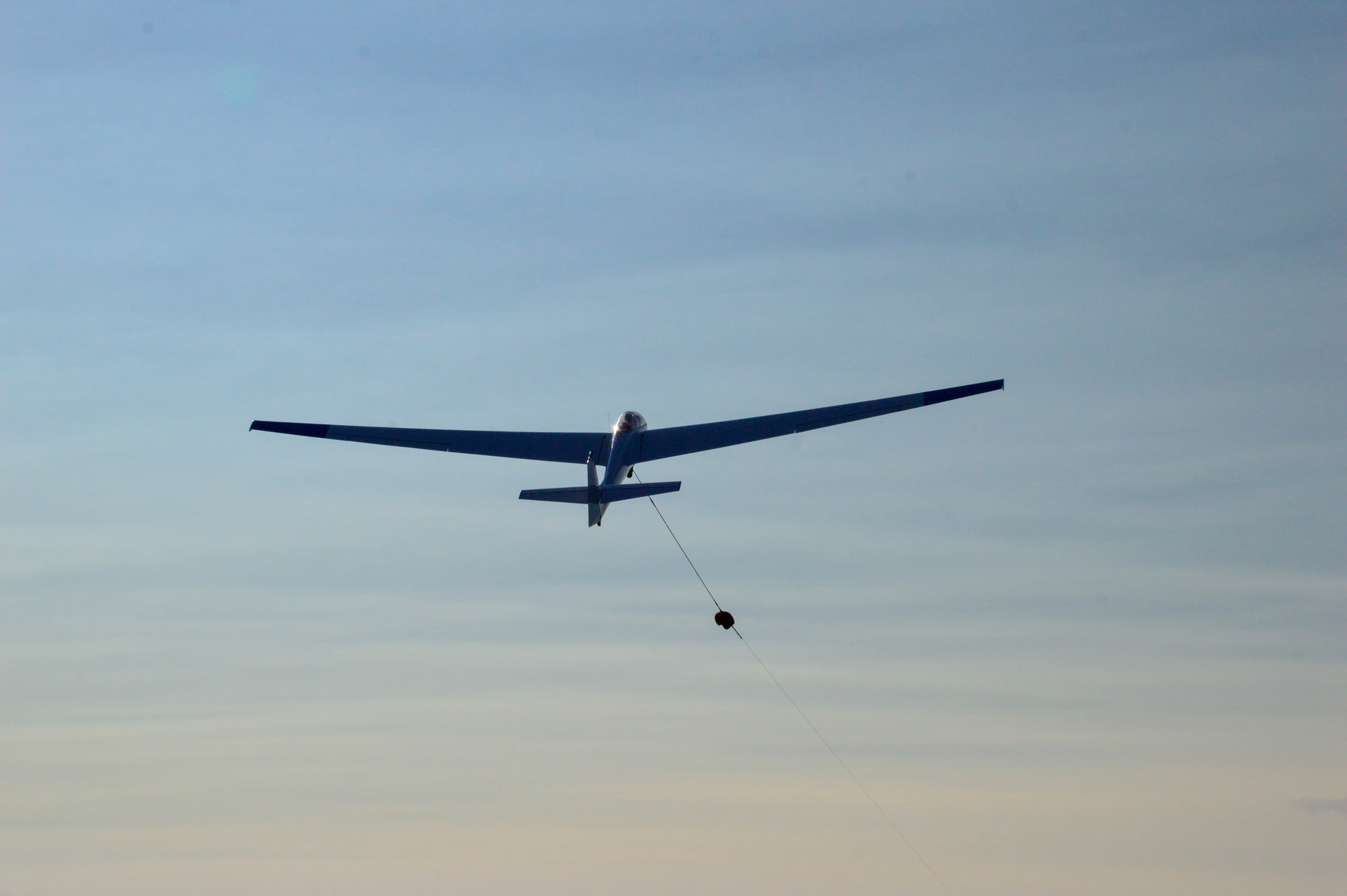 A glider connected to a tow line. (Unsplash image)

‘We just want it moved’

The club has been around since 1962 and now has a membership of 64 actively flying pilots.

Club president Dave Bax said a third of members are students learning, some from overseas and others with physical limitations.

“They’re just presented with another issue in front of them,” Bax said of the budding pilots. “It’s gonna make them do things they might not otherwise do.”

“We just want it moved,” he explained. “Even three or four-hundred metres further away—it’s just better for us.” 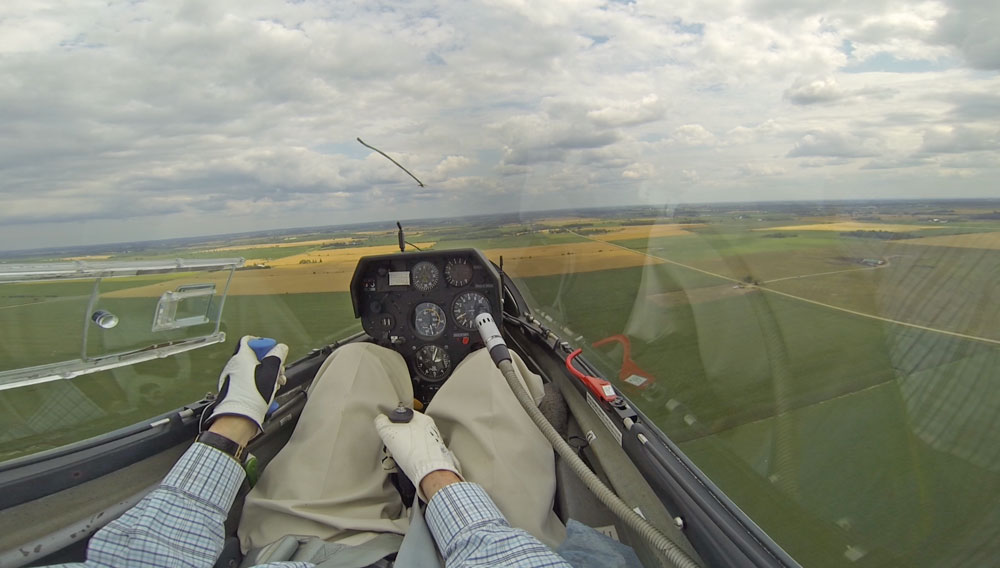 Glider pilot Tim Wood steers a glider about 600-feet off the ground north of York Soaring Club. A telecommunications tower, if approved to be built in its proposed location, would appear on a small patch of brown land on the right side of the photo. (Submitted image)

A more ideal location, Bax suggested, would be along 6 Line, a point away from the airfield and allowing for road and power access to the tower.

In an email to the Advertiser Bax said, “It is of concern that Xplornet chose not to consult with us in advance and despite the intent of the formal process, have chosen not to engage with us in a meaningful manner.”

He added responses from Canacre to their concerns, so far, have been “terse” and “unhelpful.”

At the time, council and township staff maintained the township was merely along for the ride.

As the Advertiser previously reported, Wellington North CAO Mike Givens was under the impression the township wasn’t considered an “approval authority, or even a commenting agent as it relates to these telecommunications towers.”

Neither Givens, nor Mayor Andy Lennox—who also said at the time, in part, “We don’t have the authority”—fully understood the convoluted process of getting a tower from two dimensions on paper to beaming internet signals across the countryside.

Companies like Xplornet who want to build towers, must follow steps prescribed by ISED or the local land-use authority. 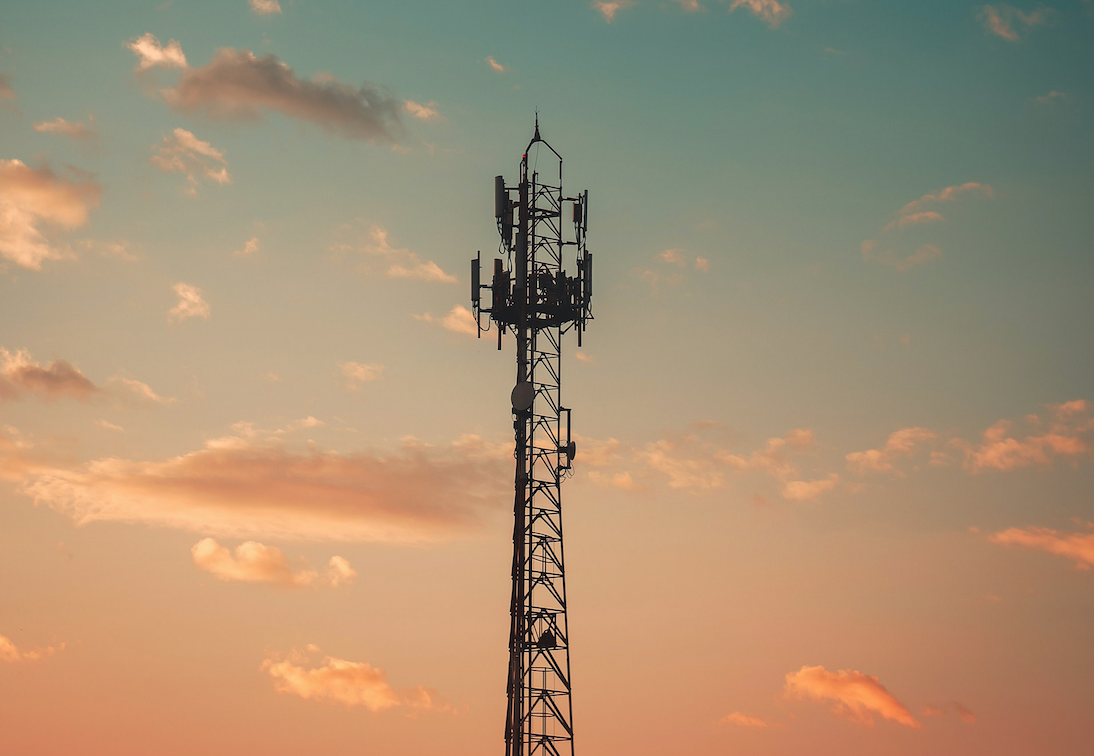 But beyond regulation and issuing a license with a final sign-off, ISED maintains it has a backseat in the process, according to its website.

It also states: “The government of Canada is not involved in the specifics of tower installations … we only get involved when there is an impasse between the municipality and the company. In these rare cases, we look at the facts and provide a decision.”

In fact, the feds revamped their “Antenna Tower Siting Procedures” in 2014 with the goal of getting local municipalities sooner involved with tower proposals in their communities.

They also recommend land-use authorities—in this case Wellington North — develop their own “local protocols” to govern the public consultation process and where towers end up being placed.

The ISED website boasts of a “ready-made tool” for municipalities to develop local protocols and the department provides advice through its online guide, further offering help to land-use authorities who reach out.

But developing local protocols is only a suggestion and Wellington North chose the ISED’s default protocol for localities which don’t have an established process.

Canacre, in this case, must acknowledge receipt of any comments within 14 days, address concerns within 60 days, and receive further responses within another 21 days. Once completed, a record of consultations is provided to ISED and the township.

Only after this process is completed, in agreement with the township, can a tower be built.

Councillor McCabe said he’s in favour of a better-connected rural community through new tower installations but is concerned about the impact on the soaring club and told the Advertiser he’s not in favour of the proposed location.

McCabe also said he wishes there was better communication between federal agencies, the municipality and Xplornet, “to find a better location for their tower.”

He expects council will ask for a more suitable location to be found, away from the soaring club.

Lennox was candid in admitting the township is still trying to figure out its role in the tower’s approval.

“It would have been very helpful if Industry Canada could have provided more clarity on the role of municipal government in their decision-making process,” Lennox stated in an email.

“In order to initiate more discussion [or] ask more questions, council will have to reintroduce the topic for further discussion. It is becoming clear that York Soaring has concerns that we have a role in working to address.”

Lennox said he hopes to hear from Xplornet about whether the tower can be moved further away from the soaring club and still provide worthwhile rural internet service. 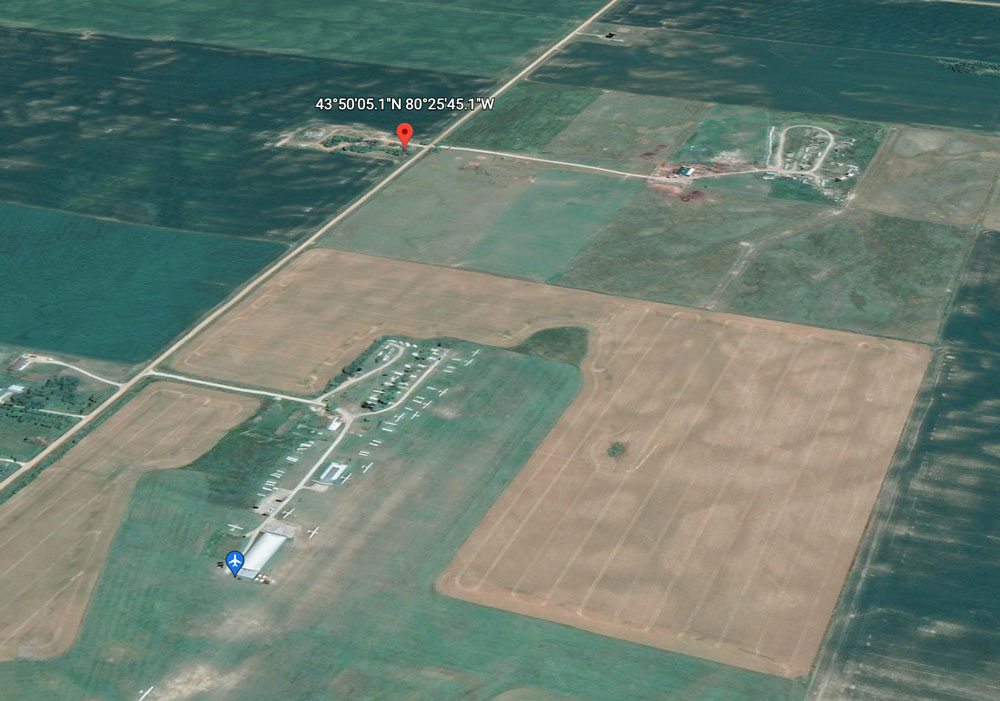 In a detailed email responding to questions from the Advertiser, Canacre associate project manager Maria Wood confirmed aviation safety concerns had been received, due to the tower’s proximity to an aerodrome, but said comments “have yet to be fully addressed.”

The company is still within the 60-day window to respond, according to Wood, and will address concerns within the next month “to have another conversation about what they have requested versus what the federal agencies have said is reasonable and see kind of where we can meet … one side to the other.”

Wood also said public comments have been shared and discussed with the township, Transport Canada, NAV Canada and ISED.

Canacre is still reviewing feedback from Transport Canada requiring lighting to be added to the tower.

NAV Canada has also weighed in regarding the potential impact on their “air navigation systems and installations.”

Media relations manager Brian Boudreau of NAV Canada said in an email to the Advertiser the “tower will not impact any of our services.”

A request for concurrence from the township on the proposed tower will be made once concerns have been addressed, Wood said.

Should the township not agree to a letter of concurrence, Wood said Xplornet would have “a few different routes” to go but was unable to speak to what those next steps would be, adding “we want to make sure that safety is top priority when we’re proposing towers like this.”

The Advertiser sent several specific, itemized questions to ISED to clarify the government’s process and involvement and received a small paragraph in response only confirming inquiries were received earlier in September “concerning the requirements for aeronautical obstructions” for the tower.

ISED reached out to Xplornet to confirm forms were submitted to Transport and NAV Canada for review.

The Advertiser followed up with ISED media relations through several emailed exchanges and phone calls to gain further clarification on unanswered questions but was referred to the ISED website and told by media relations staffer Hans Parmar, in the “vast majority” of cases, the consultation process “succeeds in balancing the needs of the community with those of tower proponents.

“When a municipality provides their concurrence, they are free to communicate that decision based on their protocols,” Parmar stated in an email.

“In the very rare situations where an impasse occurs and ISED is asked to intervene, ISED provides a final decision directly to the municipality and the tower proponent.”