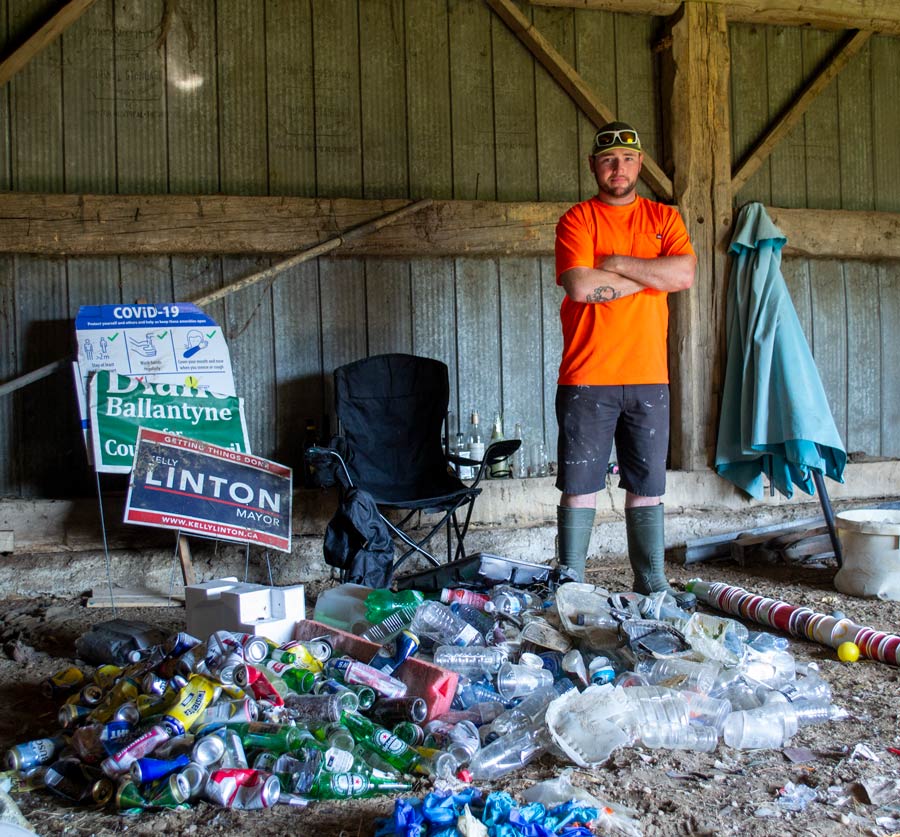 Cleaning up - Tyler Bowley has been collecting trash from ditches and parks throughout Centre Wellington since the spring. He sorts it in a barn on his rural property and disposes of it appropriately. Here he stands with a small fraction of the trash he has collected.
Photo by Jaime Myslik

CENTRE WELLINGTON – A local resident has recently made it his goal to clean up trash around Centre Wellington.

Tyler Bowley, 31, lives on Wellington Road 16 between Fergus and Arthur and he began his mission by picking up garbage in the ditch in front of his rural property.

“The amount of garbage that I got out of just the one kilometre in front of the farm, it kind of blew me away,” he said.

“I did it last year and then I did it this spring too and I started to realize, ‘Okay, if it’s like this here, I’ve got to keep going.’”

Bowley began by working up and down Wellington Road 16 and eventually moved to Centre Wellington parks and other ditches. In any given day he’ll fill the back of his pickup truck by simply picking up trash for four or five hours.

“I started to research a little bit more, I started to do it for my neighbours, the farmers,” he said.

“Because if they get an aluminum can inside their feed, you can kill a cow or a pig just no problem.

“Then that’s money out of their pocket that they’ve got to deal with because of somebody being lazy.”

What started as a hobby turned into a habit and then an obsession.

“I can’t drive past it anymore,” he said. “To see the amount.

“If I can pull that out imagine what’s out there.”

And with COVID-19 delaying his plan to begin a small handyman business, Bowley had time this year.

Cleaning up the community also helps with social anxiety, he said, because he can be out in the world but not need to be in crowds.

Once the trash is collected Bowley brings it back to his rural property for sorting. The liquor empties go to a neighbour who is on Ontario Disability and uses the deposit collection for things like gas and insurance. The plastic goes to a company in Fergus, the cardboard is burned in Bowley’s backyard and the rest goes to the Wellington County dump.

“They just don’t really care. They’ll stop at Tim Hortons in Fergus and by the time they get out to my place they’re done their coffee and they don’t want to keep it in their car.”

He said it’s easier to just keep the trash and throw it out properly at home.

“I call it convenience culture,” he said.

“When you can go and you can order this, this and this and it all comes in containers that are easy to throw out, easy to get rid of, out of sight out of mind. It’s that type of mentality that I’d like to see stopped.

“I’d rather see it collect in your car and then you’d throw it out at the end of the day.”

Bowley said he’ll continue to clean up the community until it begins to snow.