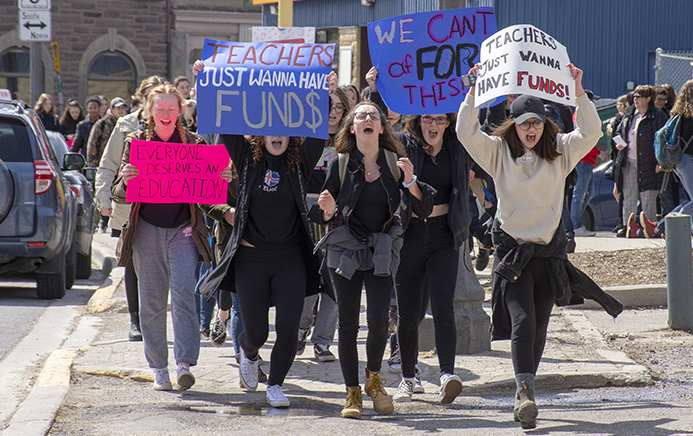 Marching for education - Centre Wellington District High School students left class and marched to MPP Ted Arnott’s office in downtown Fergus on April 4 as part of a province-wide protest in opposition to the province’s education plans. Photo by Jaime Myslik

By Patrick Raftis and Jaime Myslik

WELLINGTON COUNTY – Chanting “Education is a right; We will not give up the fight,” students from Norwell District Secondary School walked out of class on April 4 to protest the Ontario government’s planned education changes.

“Our education is the one thing we always thought we would have, but we were wrong,” said Centre Wellington protest organizer Jayden Scott.

“The quality of our education is being taken away from us if we don’t put up a fight.

“We need to prove that we do care about our education and we need to use our voices to have the changes that we demand.”

The action was part of a protest by students at 600 Ontario schools in opposition to the province’s plans, including larger class sizes and mandatory online courses.

The province-wide protest involved elementary and high school students and was organized by students on social media under the hashtag #StudentsSayNo.

At Norwell, the protest was organized by student council members.

“We’re walking out because we’re not okay with the changes that Doug Ford is making to our education,” said student council president Lindsay Lacroix.

“We disagree with the mandatory e-learning courses. They don’t work for everyone and the e-learning courses that we have now, I find, are not very user friendly and you want us to take four, so that would not be very effective and it’s not everyone’s learning style.”

Students at the Centre Wellington protest asked what the new e-learning courses will mean for students who don’t have access to reliable internet at home.

“About 12 per cent of Canadian homes don’t have access to the internet,” said protest organizer Rachel Routly.

“This puts already-disadvantaged students at an even lower start when they’re trying to pursue their education if they cannot access their course work at home.”

Lacroix said students are also concerned about the impact of cutbacks and increased class sizes “that we believe will directly affect the arts program specifically.

“Bringing up the cap size of classes means any low-attendance classes will be cut and I believe, in my opinion … one of the best classes that we have are the arts programs.”

Centre Wellington students are also concerned about the impact of larger class sizes.

“Cuts to elective programs will impact the ability of students to take the courses that they enjoy and help them discover their future careers,” Routly said.

“Personally, I discovered that I want to go into cyber security and computers through an elective and if that elective had been cut my life would have been drastically different.

“By cutting electives and changing the class size requirements, you’re impacting how students learn what they want to do and how they are able to go about that.”

Students at CWDHS were also concerned about changes to OSAP.

“The reason why so many people are even able to afford post-secondary and get an education is because of OSAP,” said Centre Wellington protest organizer Sophia Battaglia.

“They’re getting rid of free tuition grants and replacing them with 10% off tuition; are we thinking that will help students?

“We need to stand up and come together and realize all students matter, no matter your family’s income.”

She also questioned why the Ford government is eliminating the six month grace period with OSAP, after graduation.

“This grace period allowed students to find a job and a steady income,” Battaglia said. “The government has decided now to slash this and charge interest during this six month grace period to reduce complexity for students ….

“This means that as soon as you graduate the interest on your student loans begins to collect regardless of whether or not you have a job lined up after school.”

During a telephone interview, Perth-Wellington MPP Randy Pettapiece said he has not heard increased class sizes are a particular concern at small rural schools.

“That’s something that hasn’t been brought up to me before,” he told the Advertiser.

However, he noted, “Class sizes aren’t being increased in the primary classes except (Grades) 4 to 8 will have a one-student increase, but the secondary students are going to … go up to 28 students and that’s just, if you look across Canada, we have one of the lowest rates of class sizes in the country.

“So we’re just trying to line it with other jurisdictions. Another benefit too, it will reduce the reliance on portables, split classes – so there’s some benefits to this.”

Asked if lack of access to high-speed internet service could disadvantage some students in rural areas taking required online courses, Pettapiece said the issue was being addressed.

“Both federal and provincial governments are committing a lot of money to internet access as we go forward and this isn’t taking place for two years, 2021 –  so we hope to have more resources in place that they can do this,” said Pettapiece.

“I think as we move forward these issues will be addressed. It’s only one course a year. They don’t have to do four in one year.

“And I think it’s going to have a positive impact on our students as they go forth into higher learning if they choose to go that way. There’s all kinds of courses being offered online.”

Media reports from Queen’s Park state Premier Doug Ford criticized the walkouts, claiming  students were being used as pawns by “union bosses telling the teachers and the students what to do.”

However, the movement’s origin has been attributed to Listowel District Secondary School (LDSS) student Natalie Moore, who created an Instagram account (@studentssayno) and posters urging her peers to take part in a walkout.

Moore, who serves as student trustee for LDSS on the Avon Maitland District School Board, said she decided to organize the protest after her MPP, Pettapiece, didn’t respond to her email expressing concern about the changes.

Asked if he felt Ford’s characterization of the protest was fair, Pettapiece said, “I think it’s unfortunate for the parents and the children to take time off classes to do these types of things.”

He added, “Protests that we’ve had in the past – we’ve had a different protest by teachers – they at least stay and do their work and they do their protests after school.

“So I think that’s something the students need to think about, whether it was worth their while missing classes to do this type of thing. So that’s my concern.”

Pettapiece said the government’s proposed changes are about improving education, as well as financial efficiency.

“We’ve got over 100,000 less students than we had a few years ago, and yet we’ve got thousands more teachers. So we’re just trying to make the system as effective as we can,” he aid.

“We need to get back to basics, get back into the sciences – financial literacy is very important … this is our focus, to make sure students have the best education that they can, if they choose to move on to university, or to college or into the trades.”

Norwell principal Paul Richards told the Advertiser his only role in the event was to ensure student safety.

He said he urged students to stay away from the roadway and arranged for the school’s designated OPP officer to park a cruiser with lights flashing near the protest site in order to alert drivers to the students’ presence.

“My job is just to make sure your kids get home safe,” Richards said.