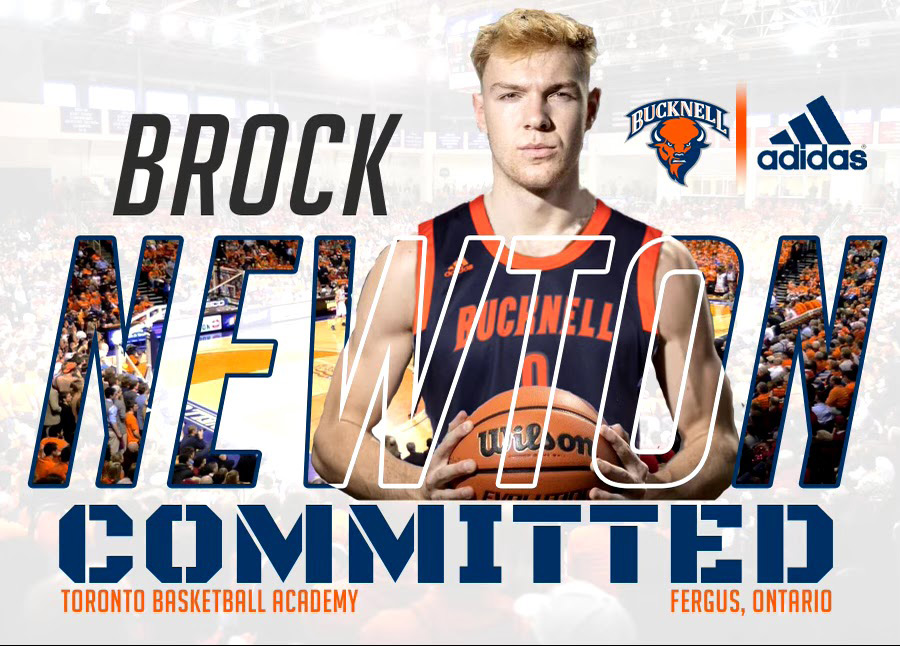 Newton, a graduate of Centre Wellington District High School (CWDHS), has received a full athletic scholarship with the Pennsylvania school, which plays in the NCAA’s Patriot League.

Newton said he had been in contact with Bucknell for over a year.

“Bucknell is a really good school, they are consistently at the top of the Patriot League, have strong academics, and I have a high comfort level with the coaching staff,” Newton said.

“They have also had lots of success with Canadian players in the past.”

The past year has been challenging for Newton, along with many other local athletes who have been unable to participate in their sport. However, Newton was fortunate enough to travel to Florida for three months with the Toronto Basketball Academy (TBA) where he gained additional exposure to NCAA programs.

Newton was also able to use the pandemic to his advantage when it came to training.  He has spent the past year putting on muscle in order to handle the physicality of basketball at the next level.

“I focused on transforming my body and my skill set during the pandemic,” Newton said.

“I focused on lifting weights.  COVID allowed me to put continuous work on my body.”

Newton said he has always sought out higher competition and is looking forward to the challenges of playing Division I basketball.

“Being in the states and being able to play at that level is what excites me the most.  This is the highest level of college basketball there is.”

Newton started his playing career with the Centre Wellington Celtics program. From there, he went on to play for the Waterloo Wildhawks and Waterloo Wolverines. While attending CWDHS, he was part of the team that won CWOSSA, and advanced to the Ontario Championship (OFSAA). He was also named District 10 Most Valuable Player.

While at CWDHS, Newton was coached by Paul Bruce and Jeff Brubacher. Newton then left CWDHS to attend the Southwest Basketball Academy in London, Ontario and play in the prestigious OSBA Prep league.

The 6’7” guard credits his coaches at Centre Wellington District High School for allowing him to develop his ‘guard’ skills, despite being one of the taller players on the team.

“Getting to play point guard in high school allowed me to transform my skill set,” he said.

Newton also said growing up playing basketball with his older brother helped make him the player he is today. His brother, Cole, is two years older than him, and currently plays university basketball for the University of Ottawa Gee Gees.

“I got to play up in Grade 10.  Playing with my brother was really good for me.  He always pushed me and helped me.”

Newton said playing one on one against his brother growing up, and always being able to play against older and bigger players helped him grow as a player as well.

Newton considers himself to be an all-around player.  He is a 6’7” player who has skills normally seen in smaller guards.  This allows him to do things on the court that most players are not able to do.

“I like to think I can do a bit of everything.  I’m able to play on all areas of the court, score from different areas, and defend every position,” he said.

Newton mentioned NBA star Jimmy Butler as a player he has been influenced by, noting Butler’s fierce mentality, hard work, and consistent effort.

Newton’s father, Jim, said making it to the next level has been a dream-come-true for his son.

“His goal has always been to play Division I basketball,” he said.

“The top Canadian schools were after him, but Bucknell was a great choice for him.  It’s a really good school academically, it’s only five or six hours away, and has a strong history of Canadian players.”

Newton was thrilled that his son was able to spend time playing in Florida, noting that with pandemic restrictions in Canada, it has been a very difficult year for basketball players trying to transition from high school to university basketball.

“The best thing for him was the TBA opportunity.  He got to actually play when basketball in Canada was almost completely non-existent because of the pandemic.”

Newton will be travelling to Bucknell in June to participate in their six week team offseason training program prior to beginning school in the fall, where he will be studying Economics.