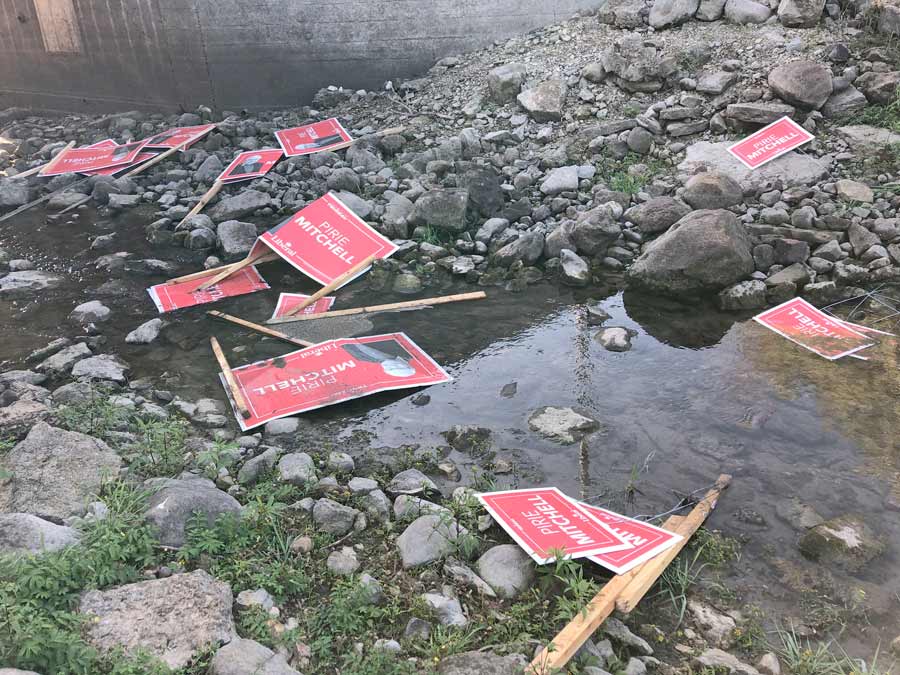 Police are investigating after more than 100 election signs for Perth-Wellington Liberal candidate Pirie Mitchell were recently stolen. On Oct. 10 a Liberal campaign official told the Advertiser about 14 signs were found below a bridge in Mapleton Township near Conestogo Lake. Submitted photo

There have also been reports of missing and damaged signs for the Conservative campaign in Perth-Wellington and the People’s Party of Canada (PPC) in the Wellington-Halton Hills riding.

Lori Gibbs of Rockwood, a volunteer with the Syl Carle PPC campaign, said 27 of their signs were removed or damaged in Rockwood, Halton Hills and Puslinch.

“It’s just offensive. It should be civilized, but this election has become extremely contentious,” Gibbs said.

“Some people have become savage about it, and it is extremely disheartening that we’re living in a country that is supposed to be free, and it doesn’t feel like it.”

Perth-Wellington Liberal campaign manager Brendan Knight said all of the large Mitchell signs in the Wellington portion of the Perth-Wellington riding, with the exception of one in Arthur, were removed or, in a few cases, cut up on the weekend of Sept. 28 to 29.

“Our supporters have been upset because not only were the big signs taken, but all the small signs in Palmerston were taken off lawns, including on crescents and non-busy streets,” said Knight.

Virtually all Liberal signs and their stakes were also stripped from Clifford, Harriston, Listowel, Mount Forest and most of Arthur, with some cut up in Monkton, he said.

On Oct. 10 Knight told the Advertiser about 14 signs were found below a bridge in Mapleton Township near Conestogo Lake.

The campaign has filed complaints with Elections Canada, Wellington County OPP and police in Stratford, where 14 Mitchell signs were defaced with graffiti. Knight said Perth OPP are also investigating reports of Mitchell signs being targeted in that part of the riding.

In a press release, Wellington OPP would only confirm they are investigating the reported removal of about 20 large electoral signs from public and residential properties in Wellington North alone.

Police want to hear about any other victims of this type of crime, and are interested in surveillance or dash cam video that may assist their investigation.

While no suspects have been identified, Knight said it appears the Liberal signs were singled out, since other election signs nearby were generally left untouched.

Stealing or damaging election signs could lead to  criminal charges of theft or mischief, and incursions onto private property could also result in trespassing charges.

He said it was “probably in the normal range for an election campaign”.

The Advertiser has reached out to all the campaigns, but no other problems were reported as of Oct. 9.