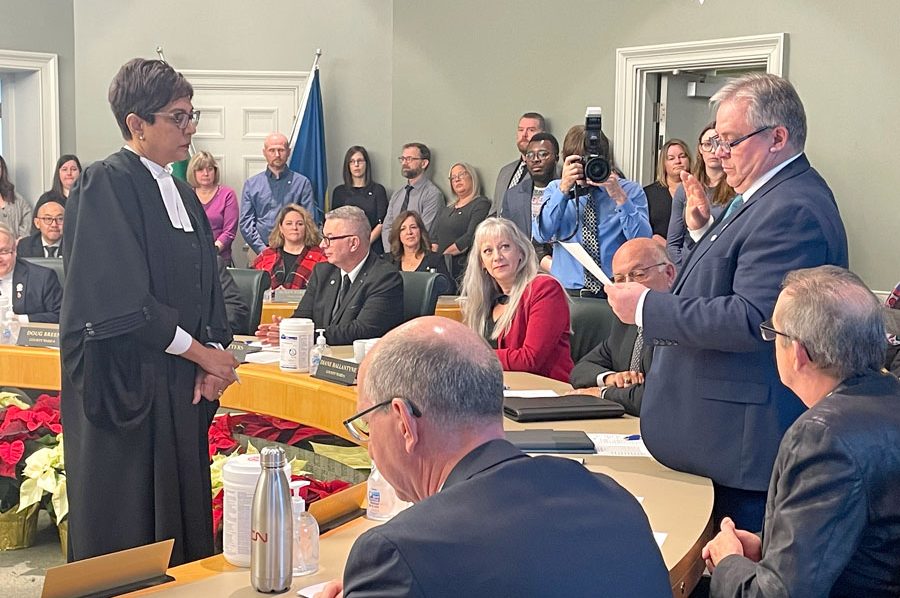 Lennox was selected by a 12-4 margin in a secret ballot by fellow county councillors over Mapleton Mayor Gregg Davidson, the only other nominee for the 2022 to 2024 term.

“I’m honoured by the confidence all of you placed in me to fulfill the role of warden,” Lennox stated following the election.

“I’m looking forward to working, working together with you over the coming years.”

He added, “To get to this point has required a lot of help over the years,” said Lennox, acknowledging his wife, Susan, and other family members, several of whom were on hand for the meeting, held in the council chamber at the County of Wellington administration centre.

Lennox has represented Wellington North since 2010, serving on township council before being elected mayor in 2014.

As a county councillor, Lennox has been a member of several committees and boards:

Since completing his Masters of business administration, Lennox has worked for major  corporations, run his own farm and operated a business consulting practice.

“I want to congratulate Warden Lennox,” stated former Warden Kelly Linton in a press release issued by the county.

“Andy’s comprehensive background in finance, business and community involvement has prepared him to lead a council that looks forward to meeting today’s challenges.

“Warden Lennox brings a variety of experiences to the role of warden,” said Wilson.

“It’s an incredible privilege to be elected by my peers to serve as Wellington County warden for the next two years,” stated Lennox.

“I look forward to building on the important work of our previous council and working hard to make Wellington County an even better place to live, work and do business.”

In his post-election remarks, Lennox noted he is the fourth consecutive generation of his family serve as the head of council in his local area.

Noting his grandfather and father both served in the military during the First World War and Second World War respectively, Lennox noted he once found the prospect of elected office “a little intimidating.

“I didn’t see how I could possibly live up to my grandfather and father’s standards of community service,” he said.

Lennox added he realized what his ancestors did “was the legacy they gave to make sure that what we have today is possible – you just need to build on that.

“So as we embark on our collective journey over the coming term, I think it’s only fitting that we first say thank you for the blessings we’ve been given and commit ourselves to taking that legacy, adapting it to today’s challenges and building on it for future generations,” he stated.

On the coming term, Lennox said, “We are facing new challenges. Whether it’s inflation at 40-year highs, housing affordability, workforce shortage is everywhere you look …  worrying changes about the way we operate being fairly rapidly imposed by the province.

“We have our work cut out for us.”

Lennox continued, “We represent a diverse community of interests and certainly from time to time we will disagree about the best path forward.

“I believe that our democratic process, while sometimes a bit messy, is the best system that can deliver the best results.”

Lennox acknowledged the work of his predecessor in the position, noting that it was under Linton the county developed its first strategic action plan.

“I think it proved to be a critical document to help us articulate our common goals and priorities and make progress on them,” he said.

“I would like to see us renew that effort and build on it by using the framework to identify concrete measurable actions that we can collectively agree on.

“Identifying and meeting the most pressing needs of our residents is critical to making the best use of scarce resources at our disposal.”

Following the election of the warden, county councillors selected chairs for the county’s various committees: