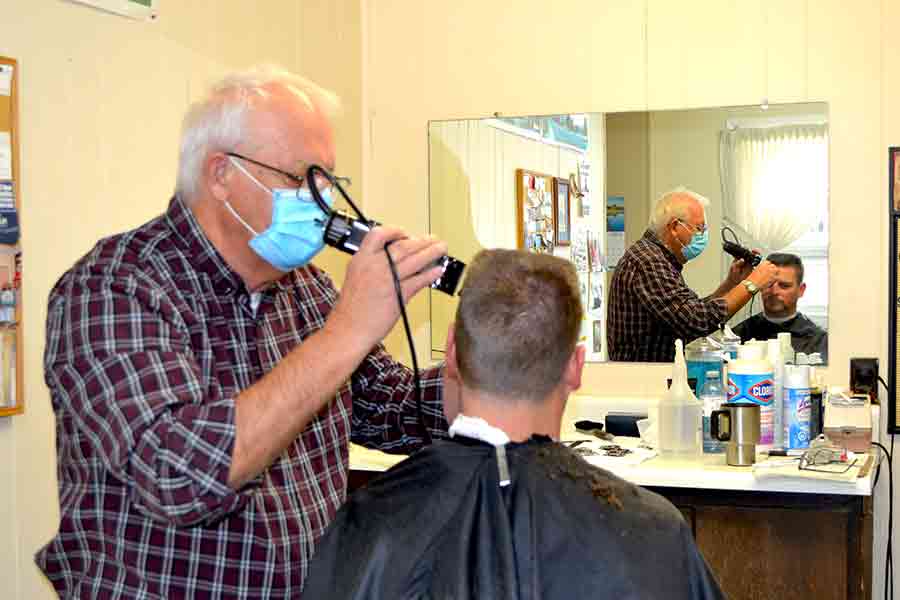 Larry Magnus, owner of Larry’s Family Place barber shop in Elora, is retiring after 53 and-a-half years in the business. Here he gives Mike Morrison, of Fergus, a flat-top brush cut. The doors close for good on Nov. 30. Photo by Joanne Shuttleworth

And neither did the snipping of Larry Magnus’s scissors.

Magnus was giving Mike Morrison, of Fergus, a flat-top brush cut, and it required some concentration. Magnus threatened Morrison with being the first customer to lose an ear.

“If you can’t do a flat-top brush cut, you’re not a real barber,” he asserted as he snipped away.

Magnus has been the neighbourhood barber at Larry’s Family Place in Elora for 53 and-a-half years and on Nov. 30 the 73-year-old is hanging up his scissors, packing away the barber pole, and retiring.

It just might be the worst-kept secret in town and during an hour-long interview at the shop on Nov. 19, a few folks poked their head inside to say goodbye.

His customers were coming for what may be their last cut from the barber they consider a friend, who has become an institution in the village.

“He’s a great guy,” said Jay Gregg, a regular since he moved to Elora five years ago. “You come for the cut and get all these stories.

Magnus started his apprenticeship as a barber when he was 16 in Brighton, near Peterborough. He liked it there and probably would have stayed but his parents talked him into returning to Elora.

He completed his apprenticeship, passed the exam and opened his shop when he was 20. But the locals were skeptical.

“I made up my mind that it would happen,” he said.

He also played lacrosse with the Mohawks, “and that’s when business really took off. They trusted me with their hair once I was on the team.”

Despite the demands of the shop and his family, Magnus coached hockey for 40 years – 15 of them with the Elora Rock. He also coach lacrosse for about 10 years and brought home three championships.

The walls of the shop were covered with team photos from bygone years, photos and posters of the Elora Gorge and views around the village, and a few awards.

He’s had a few locations downtown but has been at 227 Geddes St. for 39 years.

Magnus has seen a lot of hair styles – from crew cuts, to mullets, to the boogie cut – the long and the short of it, you could say.

At Larry’s Family Place, grooms get a free haircut before their wedding day and the first cut for a baby is free. Magnus also does house calls and has cut hair for residents at Wellington Terrace for 42 years.

He’s done thousands of haircuts and can’t even guess at how many customers he’s had, although 10 of his clients are originals, he said. And in one family he has five generations of clients.

He told a beautiful story about a client who was dying of cancer. His wife called and asked Magnus to hurry over and cut his hair.

He described having to climb on the bed to do it – the man couldn’t sit up. Magnus no sooner arrived back home when the woman called to say he had died.

“He stayed alive to get that last cut,” Magnus said. “He wanted to look good.”

A heart attack when he was 66 and the recent deaths of four dear friends convinced him it was time to retire.

He’s looking forward to golf, fishing, helping around the house and travel when that can happen again.

“I’ll miss the people,” he said, adding that many have become like family.

“If anyone would have told me I’d would be here so long, I would have said you’re crazy.”