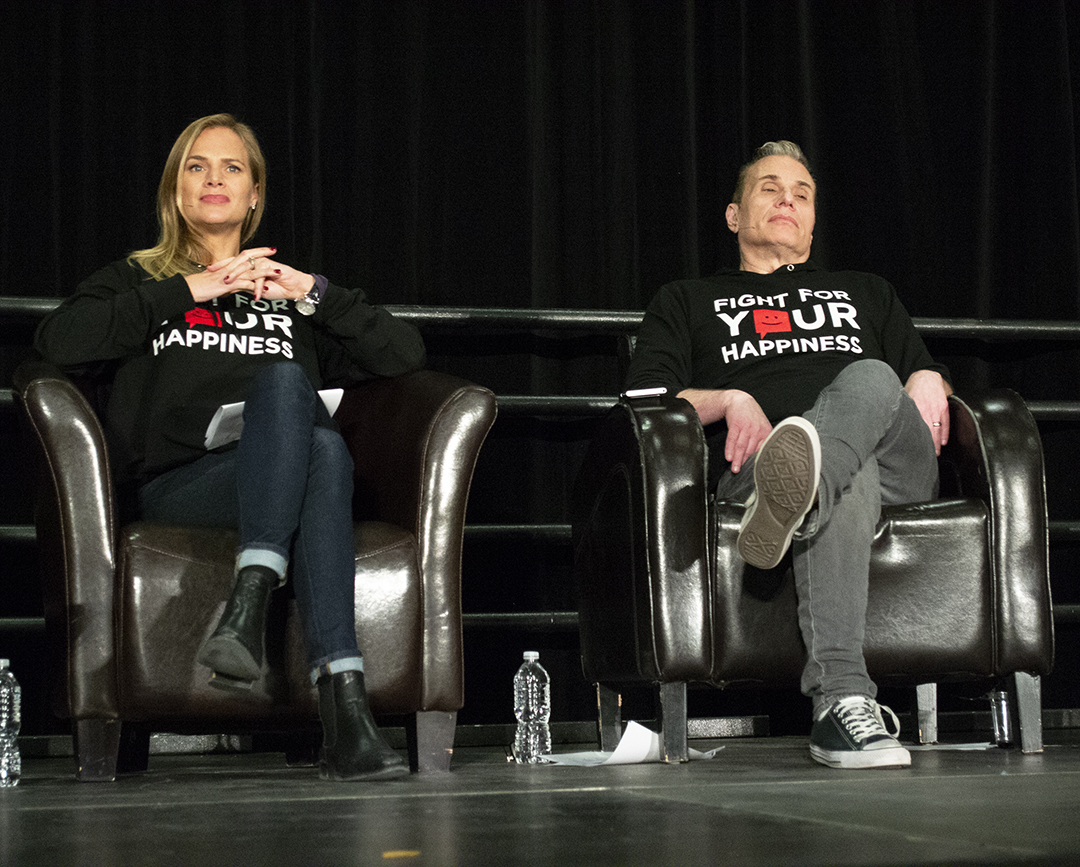 A mental health discussion - TSN personalities Jennifer Hedger and Michael Landsberg were in Fergus on Nov. 21 to host a mental health event at the Centre Wellington Community Sportsplex. Photo by Jaime Myslik

FERGUS – “You never know what somebody else is going through, right?”

That was the message TSN personality Jennifer Hedger conveyed at the Here4Hope mental health discussion in Centre Wellington on Nov. 21.

“You never know whether it’s the basketball player that you idolize on the NBA court, whether it’s a hockey player on your favourite team … the police officer that lives next door, the military man that came home from serving the country 15 years ago … and even the chick that you see giving you sports highlights every night that you think has the most perfect life in the world,” Hedger said.

“So have a little compassion and be kind and don’t judge one another when they’re trying to be honest.”
Despite warnings of snow, about 500 people showed up to the Centre Wellington Community Sportsplex in Fergus to participate in the mental health discussion with Hedger and fellow TSN personality Michael Landsberg.

But he said he’s not ashamed or embarrassed.

Hedger said depression is the worst thing in her life. When she was diagnosed in university a psychologist was trying to figure out the cause of her depression.
“Like I had to have been sexually abused, I had to have come from a broken home; what was that awful thing that happened to me, what was the trigger to make me feel depressed?” she said.
“I had a great childhood. My family loves me, I never wanted for anything. There’s no reason why I feel like this, which is a lot of the frustration of a diagnosis for me.”
She said she felt guilt for not feeling normal, but she chose to take her medication.

“It was one of the lowest moments of my life, having to take that medicine, but it was one of the best things I ever did because slowly, after weeks of taking medication, I started to feel like myself again,” she said.

“I caught myself singing in the grocery store, like humming to myself and it was like I almost recognized who I used to be and there was this sense of hope, like maybe things will get better, maybe this is okay.”

“And I admire the fact that you have addressed it head-on because, especially with suicide, the easiest thing to do is bury your head in to say ‘you know what? We’re not going to talk about it because when we talk about it people get ideas.’ We’re here to talk about it; we’re here to try to normalize the word.”
Throughout the evening two suicide survivors stood up and told the audience what they needed after their attempts.

One of the survivors, who attempted suicide seven times, said the best thing for caregivers to do is wait for the survivor to talk about their attempt, when they’re ready.
Another survivor attempted suicide three times. She said the biggest thing for her was to not dwell on the suicide attempt. While she was in the hospital after the attempt, she said she craved to be treated like a human being.

Fishburn encouraged caregivers, family and friends to talk to anyone they’re concerned about.
“If you’re really worried about something please don’t be afraid to ask them if they’ve had any thoughts of taking their own life,” she said. “Sometimes just naming that question and putting it on the table releases people from holding that secret … it’s an incredibly hard question to ask and it takes a lot of courage to ask it, but it can actually save a life.

“If you have a gut feeling about it, and you know that person in front of you and you know something is wrong, ask the question.”

Reminding someone who is struggling with mental illness that you’re not going anywhere can be one of the best things family and friends can do, Hedger explained.
“I am exhausted in the fight, but knowing that my husband is reminding me that he’s not going to abandon me because of this, it can make a difference between turning the corner and seeing that there is hope and the depressed side of my brain or the anxiety in me going ‘my husband’s going to leave me because he can’t handle this depression and why would he even stay with me?’
“You telling your son or daughter or your husband or your wife that you’re not going anywhere, can make a big difference.”

The overall theme of the evening was to talk and to treat mental illness like any other illness.

“I wouldn’t feel weird asking about your diabetes if I knew you had diabetes … we need it not to be weird to talk about mental illness as well,” Hedger said.
Linton said those conversations can be difficult in a small community.

“I think a small town is tough for [stigma] because it’s a little bit of Pleasantville going on, right?” he said. “You don’t want to focus on the negative stuff.”
He said the community has been talking more about mental health over the last few years and it needs to continue. Lawson spoke about the stigma surrounding first responders and the possibility that if a police officer is diagnosed with a mental illness they may not be able to work in the field.

“I don’t know if we have an answer to that to be honest, as to how we get past that, but we have to be aware … and as a leader I have to have that compassion and have that willingness to continue supporting, even though they’re going through a tough time.”

Lawson said he was overwhelmed by the people who were coming forward, standing up and talking at the event.
“I never expected this,” he said. “I’m pleased that that’s happening.”

The Wellington County OPP and Waterloo Wellington CMHA have teamed up to have clinicians on hand to accompany police to mental health related calls.
“You’re getting connected at the time of the crisis,” Lawson said.

“You’re getting the right help at the right time in the setting that you’re in, not in an institutional setting, not in the back of a police car going to the facility or being held until you can have a bed.
“We’re so, so fortunate to have that in our greater community.”

Fishburn said having clinicians with the police has diverted 72% of the people police see away from the hospital.
In Waterloo Wellington Fishburn said CMHA has 2,800 people waiting for ongoing care for mental health and addictions.
More funding for mental health is needed, especially as people acknowledge they do have a mental illness and seek help.
However, she emphasized that support is always available for those in crisis and with an immediate need.
The Here 24/7 line is also always available.

Waterloo Wellington is the only area in all of Ontario to have just one phone number that will help callers get to the appropriate agency.
That number is 1-844-HERE247.

“Literally we are never closed,” Fishburn said. “We have people manning phones and available for walk-ins at any of our six offices, and there’s one in Fergus here, at any time of the day, the night you call, we’re always available. “So that’s the door in.”

All the representatives who spoke, as well as those in the audience who were candid about their mental illness, said talking is a big help and is often the first step to getting help.
“Maybe if you suffer you’ll feel a little bit more relaxed and comfortable because you heard us talking about it,” said Landsberg.

“Maybe you’ll go ‘hey you know what? They didn’t sound weak, they’ve had lives; this did not end their careers, they have survived with this thing.’”