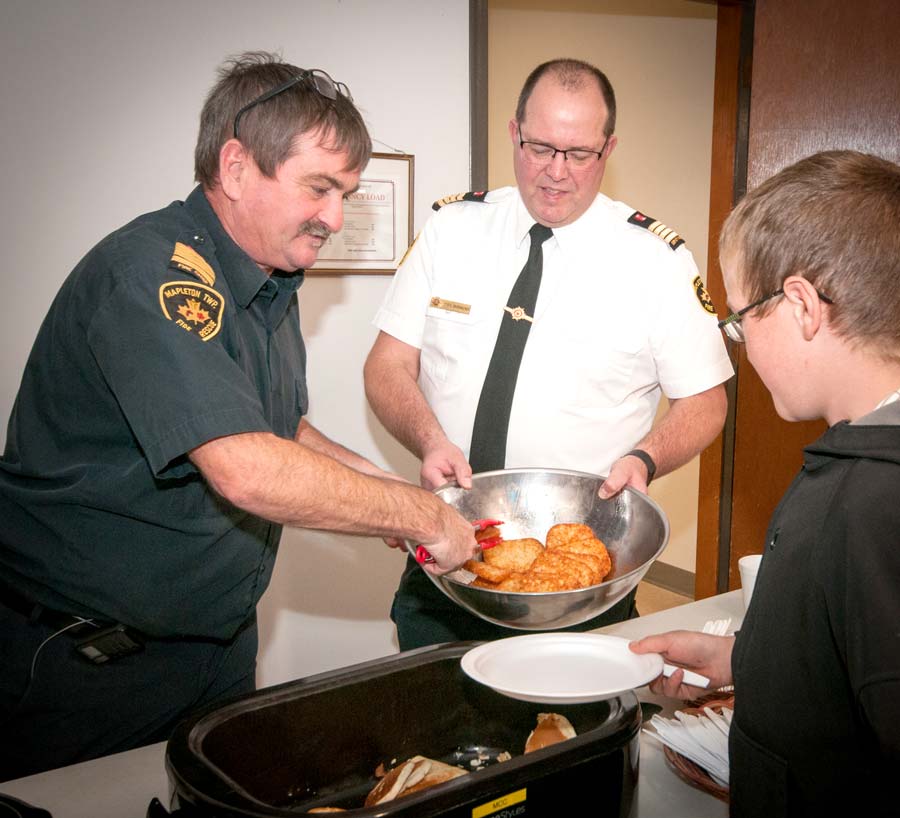 WELLINGTON COUNTY – The theme of this year’s Fire Prevention Week is kitchen safety and the main takeaway is don’t leave stoves unattended.

This year the official National Fire Protection Association’s tagline is “serve up fire safety in the kitchen.”

Though the 2020 Fire Prevention Week, from Oct. 4 to 10, is going to look a little different than in past years, local fire departments are still getting the message out about how to practise fire safety.

“Basically, the theme about the kitchen is don’t leave [the stove] unattended,” said Mapleton Fire Rescue Fire Chief Rick Richardson. “People have a habit of putting something on and that’s usually when we get calls.”

The same goes for anything that’s being cooked in the oven.

“That would be the older style oven, they just do that sometimes, so we have had those kinds of fires, not very often.”

While it’s important to have a fire extinguisher in the kitchen and garage, the best thing for a stove top fire is to keep a big lid handy.

“For grease fires, always keep a lid nearby, somewhere on the kitchen counter when cooking because if a small grease fire starts the most simple thing to do is slide the lid over the pan and just turn off the burner and leave it covered until it’s cool,” said Centre Wellington fire prevention officer Chris Paluch. “And that will put the fire out.”

He also said it’s important to create a “kid-free zone” in the kitchen that’s about one metre around the stove or areas where hot drinks and food are prepared.

“It’s just a really good idea and it’s a good thing to get the kids used to because that’s where injuries can happen,” Paluch said.

It’s also important to have working smoke and carbon monoxide alarms in every level of the house.

Richardson said it’s a good idea to locate the smoke alarm just outside the kitchen area.

“When you put it inside, sometimes … a little bit of toast causes a little bit of smoke and so the smoke alarm goes off and usually somebody hits them with a towel or bag or something like that to knock the smoke away,” Richardson said.

“And you usually end up hitting the smoke alarm down and they don’t replace it.”

He said it’s a good idea to locate the alarm in a room or hallway just off the kitchen.

While provincially another big contributor to house fires is people falling asleep on the couch with a cigarette in their hand, Richardson said that’s not the case for Mapleton.

“We’ve never had one of those, so I can’t say that’s our number one thing for sure,” Richardson said.

In Mapleton, the most common calls are about barns.

“We by far get more of them than we do house fires,” Richardson said. “I say for the most part people are pretty safe in Mapleton with house fires, but you do get the odd one, something happens.”

To help keep barns safe from fire, Richardson said it’s important to have the electrical work checked out. He said sometimes in old bank barns, the wiring isn’t in conduit and with mice in the walls, fires can start.

When firefighters are called to a barn fire it’s often too big to get a good idea of how the fire started, but Richardson said it’s usually malfunctioning equipment or electrical reasons.

Richardson also said the beginning of the COVID-19 pandemic was quite an anomaly.

While the department told firefighters they were going to limit the number of people in trucks going to emergency calls, fire departments were soon taken off the tiered response list, unless the accident was very extreme.

Normally the Mapleton fire department would see between 15 and 20 calls a month. However, in March there were two calls and in April and May there were three calls.

Once the province started reopening and more people were on the roads, the department received about 16 calls in June, 23 in July and 27 in August.

Richardson said if there was one good thing about COVID-19 it was that there were fewer emergency calls; however, over the last few months there have been bad barn fires and bad accidents.

For fire prevention week Richardson said it’s a good idea to create a house escape plan so everyone knows at least two ways to get out in case of a fire.

While the fire department usually hosts a pancake breakfast for Fire Prevention Week, Richardson said the event is cancelled this year.

“We had up to 600 people sometimes,” he said. “Of course having that many people in one room to enjoy pancakes is not going to happen.”