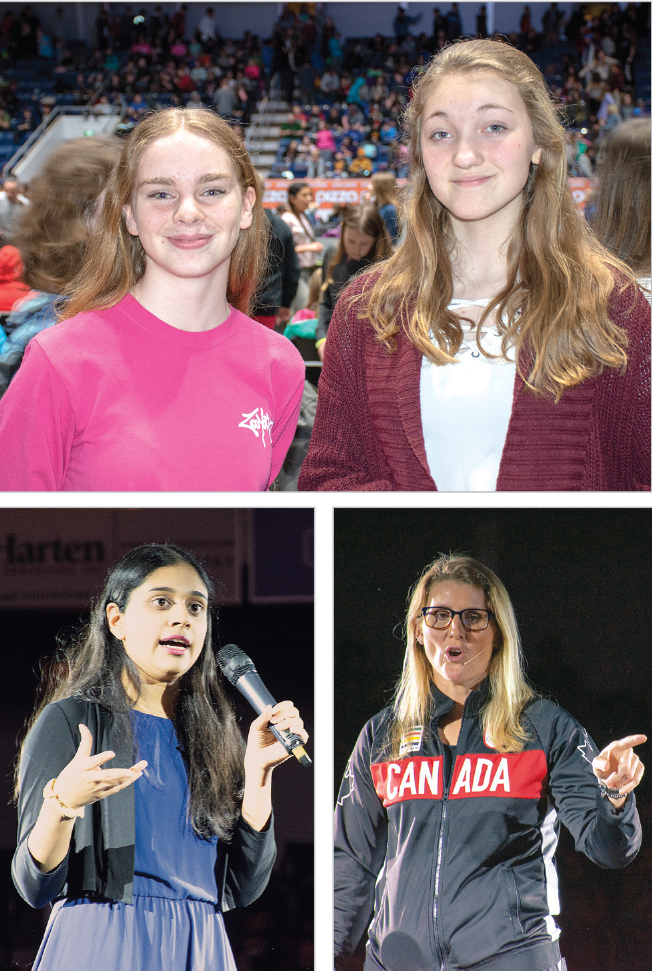 That’s the message 18-year-old Trisha Prabhu left with 5,000 Grade 5 to 8 students at this year’s Empowerment Day on May 2.

The annual Upper Grand District School Board event took place at the Sleeman Centre in Guelph. This year’s theme was “I can. I will. Watch me.”

Prabhu, inventor and CEO of ReThink, was one of the inspirational speakers for the day, joining Olympian Hayley Wickenheiser, Paralympian Patrick Anderson and global adventurer Leon Logothetis.

The speakers focused on the importance of kindness and thinking of others.

Empowerment Day was created in 2015 by Drayton Heights Public School students. The school’s student council continues to run the event.

“It’s great to be involved because you get to impact the lives of so many people,” Bloemberg said.

“Being here … makes you think that you’re doing something bigger than just yourself, so it’s empowering not just to the people watching, but to us,too,” Kashin said.

Prabhu is a Harvard University student who grew up in Chicago.

“I am a former victim of cyberbullying … I grew up in a town that was predominantly Caucasian,” she said. “So being one of the few women of colour in the community instantly made me a target.”

Prabhu said she didn’t want to think about the problem, just move on.

Then she heard about Rebecca Sedwick, a 12-year-old student from Florida who took her own life after a cyberbullying experience.

“She received these awful, terrible messages after getting into a feud with two other women over a boy,” Prabhu explained. “One day she decided it was too much for her, she just couldn’t take it any longer.”

“I didn’t want to be a bystander to this issue anymore,” she said.

When she was 14, Prabhu created a social media simulation computer system and ran a study with over 1,500 students. One group communicated as usual, while the other group received pop-up messages asking if they really wanted to send certain messages.

Through her research Prabhu learned the prefrontal cortex in the human brain  – which “controls decision making and impulse control” –  does not fully develop until 26 years of age.

“Therefore, teenagers “are not equipped to make these decisions, but we’re giving each and everyone of you an incredible power and responsibility in the devices that you’re getting.”

Prabhu’s study showed teens will reconsider what they’re writing if they’re given a reminder.

“I was absolutely stunned to learn that when teens had a second chance to think about what they were doing on social media, over 93% of the time they decided not to post an offensive message,” Prabhu said.

She added, “And that was kind of my aha moment. I realized this can be something so much more than just a concept. This can be something that’s in the hands of millions of people around the globe and could fundamentally change the way we communicate with each other.”

Prabhu completed a computer course and nine months later she created ReThink. which “gives teens a second chance to think about what they’re doing on social media.”

In the last three years the app has been downloaded 2.5 million times throughout the world.

“You have ability, you guys are so strong and so powerful,” she told students. “And most importantly, you are not just the future, you are the now. You can make an impact today.

“So go out there, be your amazing selves and change the world.”

A four-time Olympic gold medalist in women’s hockey, Wickenheiser talked to students about decision making. She told them about The Road Not Taken by Robert Frost.

“At the end of the poem it goes like this, ‘two roads diverge in the woods and I took the one less travelled and that has made all the difference,’” Wickenheiser said.

“And when I read this poem when I was in Grade 4 or 5, I knew that was going to be the story of my life.”

When Wickenheiser began playing hockey, she said nobody wanted girls to play. She qualified for a hockey camp and had to sleep in a closet because there were no girls’ dorms.

In her early teens Wickenheiser made a AAA boys hockey team but after playing 15 games, she was cut because the coach said he couldn’t “handle having a girl on the team.”

“In that moment, I had two choices,” she said. “I could feel down, I could complain and I could make a big deal and get sad about it. Or the second road, that road less travelled, I could prove him wrong.”

She chose the road less travelled and made Canada’s national team later that year, at age 15.

“I finally, finally had a place where I belonged in hockey,” she said. “I felt really lonely a lot of times when I was a kid.”

The four-time Olympic gold medalist also talked to about losing.

After receiving her silver medal in Women’s Hockey during the 1998 Winter Olympics, Wickenheiser said she went home to Calgary in a deep depression.

“Everything I thought I was … as a person was wrapped up in who I was as a hockey player,” she said. “So if I was scoring goals and we were doing well and we were winning then I was a good person and I was worthy.

“But as soon as I wasn’t I didn’t know how to handle that, so I got really down.”

Eventually a coach gave Wickenheiser a piece of paper that said “a gold medal is a wonderful thing, but if you’re not enough without it, you’ll never be enough with it.”

“It changed my life,” she said. And that paper went with her to World Championships and to the  Olympic Games as a “reminder that it’s just a game, it’s not the end of the world if you don’t win.”

Wickenheiser reminded students to “Be brave, believe in yourself and when those two roads [split] sometimes you can take the easy (road), but most times it’s well worth it to take the road less travelled.”

The three-time Paralympic gold medalist grew up in Fergus. At the age of nine he was struck by a car and lost both legs below the knee. Anderson said the community rallied and raised money for his family.

“One bad thing happened to me and suddenly 100 beautiful things happened to me and my family – and even though it was a real painful time for me, it also just started to dawn on me that I also had a whole lot to be thankful for,” he said.

However, he missed the sports he wasn’t able to participate in, even with his prosthetic legs.

He compared playing wheelchair basketball to what he imagined flying would feel like.

“I’m so thankful that … came along at that time,” Anderson said. “I was one of the lucky ones.”

He said not everyone finds a new passion so soon after a tragedy.