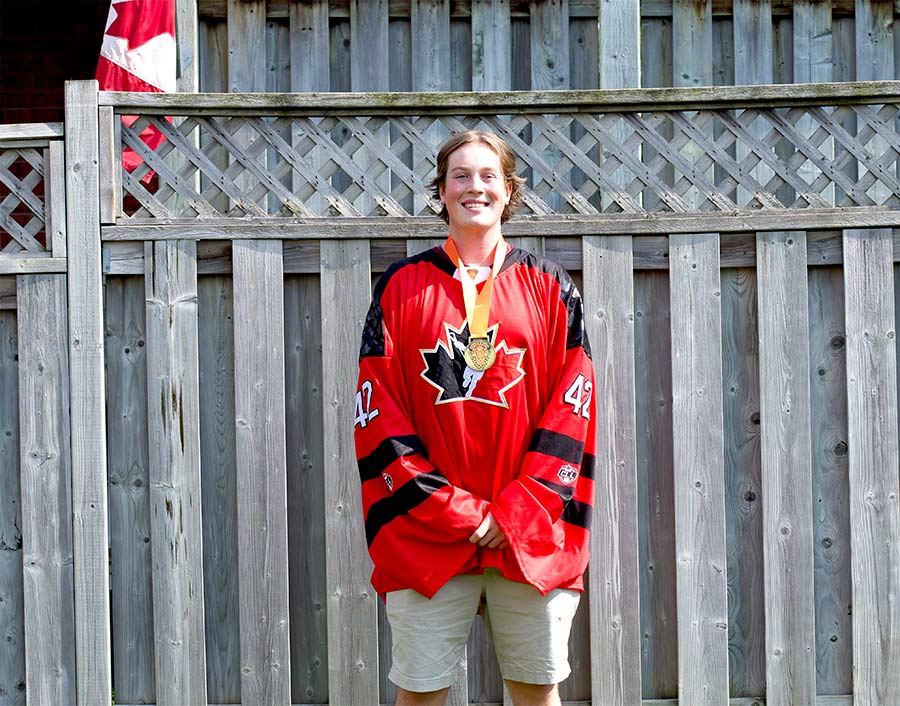 Lacrosse star - Landon Kells of Fergus was recently named to the all-world team at the World Junior Lacrosse Championship in Winnipeg, where he led Canada East to a victory over Canada West. Kells, who has just completed his Junior A lacrosse career, is set to continue his journey with the Calgary Roughnecks of the National Lacrosse League. Photo by Curtis Gordon

FERGUS – The future is bright for a talented, young lacrosse goaltender from Fergus.

The tournament, held in Winnipeg from Aug. 8 to 14, had to be altered this year and included fewer teams due to the pandemic. However, the tournament still featured some of the sport’s brightest young stars.

Kells was part of the winning team, Canada East. The team defeated Canada West in a three-game, total goals series to win the tournament.

Kells had previously represented Canada in the 2019 World Juniors.

“I thought it came together fairly well. They had done it in the past, where they’d split it up into Canada East and Canada West,” Kells said in an interview with the Advertiser.

“There were actually some guys on the Canada West team that I had played with in 2019 that were on my team. So, it was nice to see them play against me. It was really competitive.”

Kells said he believes he played some of his best lacrosse during the tournament, but being named to the all-world team was not his first priority.

“Obviously, I wasn’t thinking toward that trophy. I was more hoping just to win, but it was a nice bonus for that to happen.”

The 6’2” goaltender played three seasons with the Peterborough Lakers of the Ontario Junior Lacrosse League (OJLL). Because of the pandemic, the 2021 OJLL season was limited to eight games, all played over two weekends in Oakville.

After such a long hiatus, Kells was thrilled to have the opportunity to return to competition this summer.

“I had been looking forward to it. I thought that lacrosse was going to get cancelled again this year, so I was ecstatic to have that happen.”

Kells said expectations in Peterborough were lower this season, since the team was primarily comprised of younger players.

“I was expecting us to go in there and compete, which we did, and I was happy with how it turned out. Obviously, we didn’t win as many games as we would have liked, but the effort was there by every player,” he said.

“It was a grind. Eight games in essentially four days. Everyone was definitely hurting a little bit and a little sore. It felt exactly like when you’re younger, playing in a tournament.”

Having now reached the finish line of his junior lacrosse career, Kells is excited to officially begin his professional career.

Kells is a National Lacrosse League (NLL) prospect with the Calgary Roughnecks. The Roughnecks drafted Kells 46th overall in the 2019 NLL entry draft. He has already spent time on the team’s practice roster and has even had the chance to attend games as the team’s backup goaltender.

Reflecting on the night he was drafted in 2019, Kells said it came as a surprise to him when his name was called by the Roughnecks.

“I had talked to a few teams, and Calgary wasn’t one of those teams even on my radar,” he explained.

“When my name was announced, I was pretty shocked. It was a great experience and something I had looked forward to since I was a little kid. Just to be able to live it out was a dream come true, and I’m thankful for all the people who helped me get there.”

Kells said he is looking forward to being with the team on a full-time basis, now that his junior career is over.

“I’m really hoping to show people how good of a goaltender I can be. I feel like I can play at the highest level and be successful at it,” he said.

Since first being around the Roughnecks, the young prospect has noticed significant differences in the level of play, noting that the speed of the game is dramatically higher at the professional level.

“It’s definitely a big change, because every shot you’re getting is testing you. You’re really getting pushed to the limits,” he said.

“In the NLL, even if a defensive guy is coming down, he can shoot the ball and score whenever he feels like it.”

Kells gave credit to Tyler Richards, a former goaltender with the Roughnecks who now serves as a goaltender coach with the team.

“He’s now our goalie coach. He’s been huge in my development so far. He calls me every weekend to tell me things I should be working on and see the progress that I’ve made.”

Another mentor for Kells has been Nick Rose, The Toronto Rock’s long-time goaltender.

Since I started as a goalie, I went to camps, and he taught me a lot and has been in contact with me. He’s been nothing but a great guy,” Kells said.

“He’s been in the league and he’s been really good. He made it, and now he’s giving back. Without players like him, there wouldn’t be players for people like me to look up to and model my game after.”

The Fergus native has certainly not forgotten where he started.

Kells grew up playing in the Centre Wellington Minor Lacrosse system, starting at age four. Before he joined Peterborough for his Junior A career, he played two seasons of Junior B for the Elora Mohawks, a team he led to a Founders Cup championship in 2018.

“Junior B was a big step for me, coming out of minor lacrosse. It didn’t feel like a team, it felt like a brotherhood,” Kells said.

“Those were probably some of the most fun years of lacrosse I’ve had, playing with them. We worked so hard trying to get to that Founders Cup and I’m so happy that we did it, because there are so many guys on that team that deserved it.”

Kells said one day, after his playing career comes to an end, he would like to give coaching a try. It has always been important for him to give back to the sport that has treated him so well.

“You look back at when you were that age, and you don’t realize how much time and effort those coaches put in, and what it really meant to them to be coaching the team.”

Even with the individual accolades pouring in, Kells has remained humble. He said he is grateful to all of the management teams and coaching staffs who believed in him throughout his time playing minor lacrosse, as well as during his time in Elora and Peterborough.

Kells said his biggest supporter along the way has been his dad, Dave Kells.

“My dad has always been there for me. He’s been helping me and pushing me to be better. I can’t express how thankful I am for that.

“Without him, none of this would have been possible.”