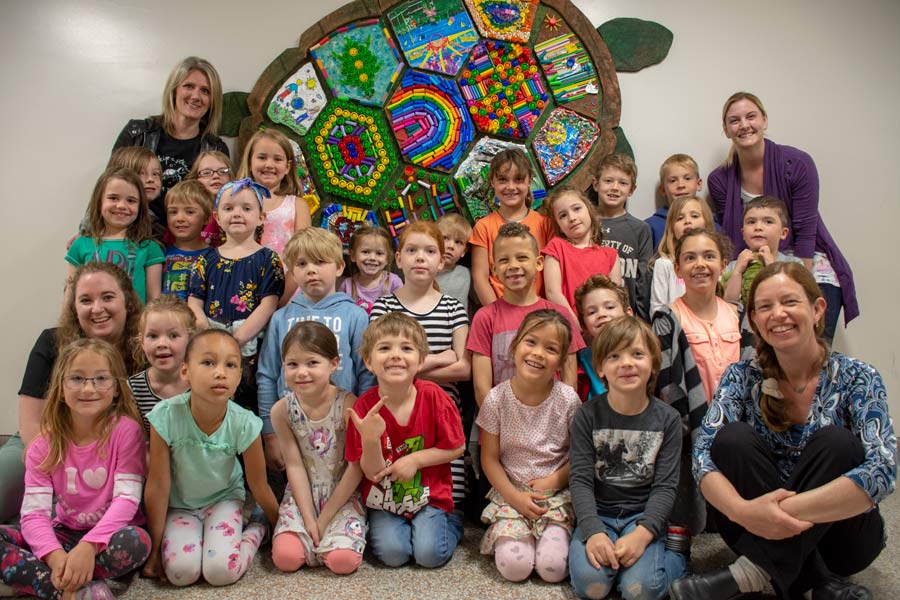 Students at James McQueen Public School in Fergus decorated sections of a turtle with trash. Photos by Jaime Myslik

Special education resource teacher Lija Tovell and kindergarten teachers Avery Gray and Alannah McGregor were instrumental in facilitating the creation of the giant turtle of trash that now hangs on a wall in the school.

Gray added, “It’s not about one person doing it perfectly, it’s about everyone doing a little bit.”

McGregor added, “Each class is doing something small and we bring it together to make something beautiful.”

Last year, McGregor’s class watched a video of a turtle with a straw stuck up its nose.

“Our class was really passionate about getting other students and the whole school to stop using single-use plastics like straws,” McGregor said.

“So we raised money to symbolically adopt a turtle from WWF (World Wildlife Fund) and then from that they went around to different classrooms and talked about what they had learned and encouraged the other classrooms to stop using straws with our milk program.”

This year the school implemented boomerang lunches, where students take home food waste and garbage left over from their lunch.

“The point of that was basically to be more conscious of the waste that we’re throwing in the garbage,” Tovell said.

Then the turtle idea was born. 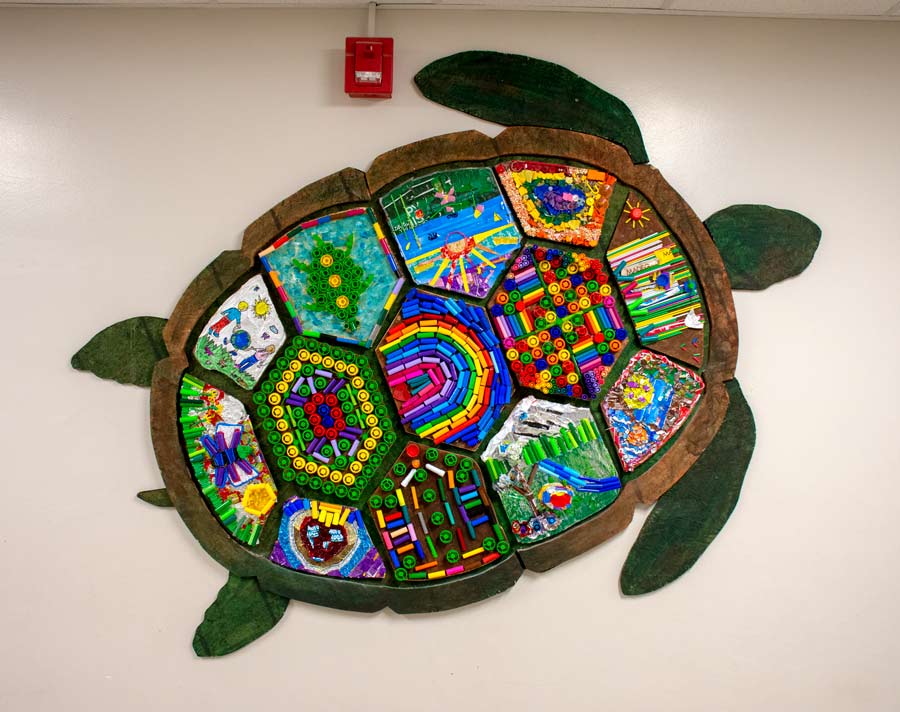 Students at James McQueen Public School in Fergus decorated sections of a turtle with trash.

The teachers wanted to do the first ever school mural and raise environmental awareness.

“We had thought. ‘Let’s combine the two and do something that was environmentally friendly and bring awareness to the amount of plastics and garbage that we’re producing so we can talk about reducing as the most important of the reduce, reuse, recycle kind of trio,’” McGregor said.

So they asked students and teachers to save plastics and other items that would normally end up in the garbage and landfill, rather than items they could reuse like a plastic fork. The teachers said students gathered a lot of granola bar wrappers.

Once the items were collected, the eco team sorted them and divvied out the garbage so each classroom had one material to use, for example marker lids, and they received one puzzle piece from the turtle’s shell.

“A class along with their teacher was designing the piece and what it would look like, not knowing that in the end it would end up being part of a turtle because that is something we would reveal to them at our Earth Day assembly,” McGregor said.

The Earth Day assembly was held on April 24, and a representative from each class came up and put their puzzle piece on the turtle outline, painted by McGregor’s class.

“At the end they were like ‘wow,’” Tovell said. “Because it’s so beautiful for them, and it’s so colourful.”

McGregor and Gray said that all the students are so respectful and proud of the mural. They point it out to their parents and touch it gently every now and then.

Teachers said students are still looking for trash at recess and picking it up to throw out. Gray said that parents are even saying they need to carry plastic bags so they have somewhere to put the trash that their children pick up outside of school.

The teachers weren’t sure they’d do another mural next year, but McGregor said the goal is to begin greening the play ground and making it more inviting as an outdoor learning space.