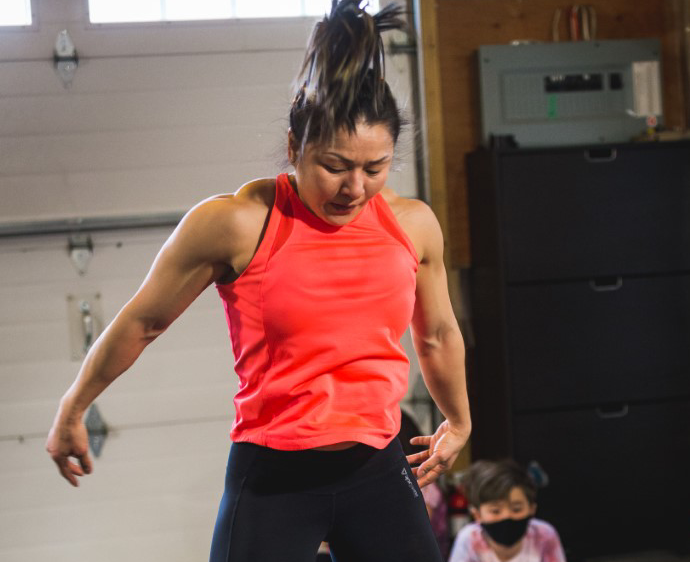 Belinda Cox, a teacher at Centre Wellington District High School, recently set the Guinness World Record for most chest-to-ground burpees in one hour by a female, with 775. Submitted Photo

ELORA – Belinda Cox, a teacher at Centre Wellington District High School (CWDHS) recently set the Guinness World Record for most chest-to-ground burpees in one hour by a female, with 775.

Cox set the record on March 14 and Guinness verified the record earlier this month.

To prepare for the record-setting attempt, Cox performed roughly 8,500 burpees in the month leading up to it in order to plan her strategy.

“The standard Guinness requirement of ‘chest-to-ground burpee’ is different from the burpees I am used to doing, so the initial week was focused on tweaking the actual burpee technique and making sure the reps I was doing were meeting the standards,” Cox said.

“Then I spent the next four weeks trying different strategies and building volume.”

Cox said the idea to attempt the record came about after she saw an article on Alison Brown, a personal trainer from Listowel, who had set the previous record of 730 chest-to-ground burpees in one hour.

“A few people had tagged me in the article and said that I should try it,” Cox said.

“My husband was the one who filled in the application form to Guinness. It took six weeks before we found out that the application was approved and that was at the end of January 2021.”

The Elora resident said the experience of trying to break the record was very enjoyable for her.

“I study sport physiology and training methods and it was such a fun task to experiment and keep track of the adaptations I was going through physically and mentally,” she said.

Cox completed the record in her garage gym. The record was set in March, when Ontario was not in full lockdown and indoor exercise was still able to take place while following proper COVID protocols.

Cox had two independent witnesses, who were certified fitness coaches, and cameras from two different angles to document the attempt. This was all required evidence to submit to Guinness for official review.

It then took two months for the review process before she heard back about the record being officially verified.

The 41-year-old mother of two has a very competitive background. She is an accomplished wrestler, being the Canadian University Sports Wrestling Champion in 2001 and 2003.  Cox is also a member of the Western University Sports Hall of Fame. In 2005, she was a Canadian Wrestling World Cup Team Member.

She has made an effort to instill a competitive spirit in her students and has led by example. She is known to participate with her students during fitness classes.

“My promise to my students was that I would never ask them to do anything that I would not do myself,” Cox explained. “People say that kids will do what they see you do and not what you tell them to do.

“I guess I instill the competitive spirit in my students by doing what I ask of them – put in the work, control what you can, trust your training and take the risks even if you might fail.”

Cox, who has been teaching at CWDHS for two years, had previously taught physical education at Centre Dufferin District High School for 12 years. She said the pandemic has made it more difficult to connect with staff and students at her new school.

“I’ve lived in Centre Wellington since 2009 but had always worked in Shelburne,” she said.

“I started teaching at CWDHS in 2019. I taught special education for one year and this year I have been teaching history. The pandemic has restricted the opportunity to get to know the staff and students and I am still getting to know the school community here.”

She did, however, get the chance to teach physical education remotely with the Upper Grand Remote School during a previous quadmester.

Cox described how she had to think outside the box in order to effectively deliver the curriculum in a remote setting.  She tried to help students change their mindsets from “we don’t get to play any sports” to “we got to try things that we didn’t do in regular phys-ed class.”

“Obviously, we could not do the traditional team sports individually from home, so it was more like a personal fitness course,” Cox said.

“I led daily synchronous workouts that students could do from the space they have at home. We did lots of body weight movements and students used household objects that they could find to substitute for fitness equipment.”

The classes also involved the students doing lots of burpees. Not surprisingly, Cox is a major proponent of them.

“It’s a movement that encompasses so much – mobility, strength and cardio, and it takes no equipment and little space. I think it’s a great value movement for the benefit of its return.”

For now, Cox does not have any plans to pursue other world records. She hopes this experience will inspire other people.

“At a time when so many people are suffering from the lack of opportunities to go to the gym and carry on with their regular exercise routine, I hope this inspires others to look for something that they feel passionate about, challenge themselves to set a personal goal, and dive deeply into a process of pursuing that goal,” she said.