MOUNT FOREST – A group of Mount Forest residents banded together, after the community’s most recent suicide, and organized a Mental Health Awareness Night.

“We saw a huge need,” said Shelley Weber, noting many people didn’t know who to talk to or where to turn for more information about local services.

She and fellow organizers Michelle Kleinsteuber, Lisa Weber and Angie Weber were correct, as a huge crowd attended the event on Feb. 24 at the community hall.

“We have well over 400 people here,” said Weber.  “We put out 300 chairs and had to get more. It goes to show that this type of evening was needed.”

Taylor Weber and Jenna Kleinsteuber were emcees for the event, which featured mental health advocate Kendra Fisher as guest speaker.

A hockey player, wife, mother and firefighter who works with Angie Weber in Guelph, Fisher grew up playing hockey in  Kincardine, a town she likened to Mount Forest. 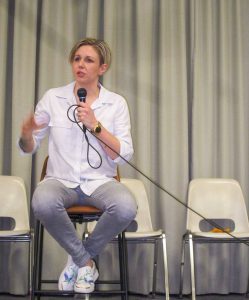 With dreams of being a goalie for Team Canada, she moved to Toronto to finish high school and play girls’ hockey as there were no girls teams in Kincardine at the time.

Following a car accident in which she broke a vertebrae in her back, she recuperated quickly and although she was in the best physical condition of her life, “everything felt off. I couldn’t explain it.”

Fisher felt she couldn’t breathe, felt sick to her stomach and had a weird pressure in her head. She felt sure she was going to die.

She visited hospital emergency rooms and was sent home. Doctors referred her  to specialists, batteries of tests were run, and she was told there was nothing wrong.

She described escalating symptoms that ultimately resulted in her turning down a position on Team Canada.

“I literally walked away from my life, what I had always wanted to do, what defined me,” Fisher said.

She was eventually diagnosed with severe anxiety disorder coupled with panic attacks, agoraphobia and depression. She sought help and learned to live with what had become a crippling disease.

Fisher offered harrowing accounts of coping with mental illness – everything from people minimizing her depression by telling her to “stop worrying” to being terrified that she wouldn’t wake up if she went to sleep.

She described the difficulties of getting the correct medications and the importance of physical activity, nutrition and learning about the disease.

She said she is proud of the fact that only a handful of people knew she had been dealing with a mental illness.

It was when she read a memorial for a 14-year-old girl who lost her battle with mental illness that Fisher realized she “was part of the problem.”

“Kids like that 14-year-old girl didn’t know that there’s help out there, that she wasn’t alone,” Fisher said.

“If by going out and sharing my story I could help even one person find tomorrow, I decided to do it. Sometimes it takes one person to let you know you’re not alone.

“People can’t learn what we’re not willing to educate them on.”

Following Fisher’s presentation and questions from the audience, a panel of local service providers offered advice and answered questions. They set up  booths  around the perimeter of the room and everyone was given a grab bag with information pamphlets.

Organizers of the event were joined by student volunteers wearing black T-shirts with the logo “Mental Health Matters” and a green ribbon with the message “It takes a community…because doing it alone is not possible.”