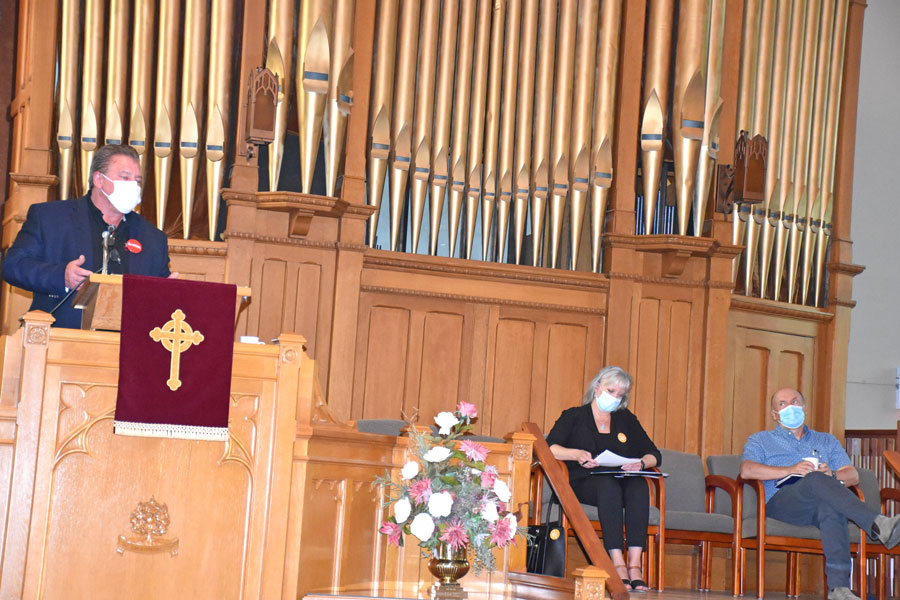 Three local candidate showed up for a debate on heritage and housing on May 12. From left, Liberal Tom Takacs, NDP Diane Ballantyne and New Blue Stephen Kitras. Photo by Joanne Shuttleworth

ELORA – Premier Doug Ford came under fire at a debate in Elora hosted by the Wellington branch of Architectural Conservancy Ontario (ACO).

Three Wellington-Halton Hills candidates attended the debate at Knox Presbyterian Church on May 12 but notably, incumbent Conservative candidate Ted Arnott was not there to deflect criticism or defend the actions of his party’s leader.

The focus of this debate was heritage – specifically how heritage buildings and culturally significant landscapes in Centre Wellington can be preserved while the province imposes growth on municipalities. 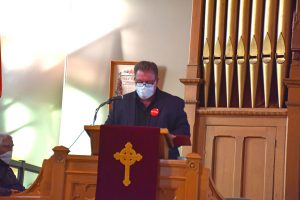 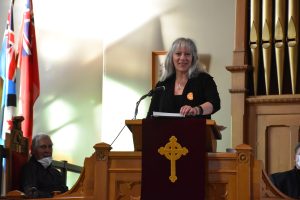 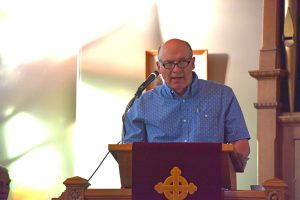 Just before the writ dropped, Ford introduced legislation to address the high cost of buying a house, but he didn’t get much credit for his bill at the debate.

“The changes proposed will fundamentally change the way development is approved,” said Susan Ratcliffe, chair of the Guelph branch of ACO, before the debate got underway.

“It will decimate municipal planning authority. It gives the power to sidestep the Provincial Policy Statement and Official Plans. And it will sidestep the Ontario Heritage Act.”

Elora resident and one of the debate organizers Bob Jackson, said the current Official Plan in  Centre Wellington limits the height of buildings in downtown Fergus and Elora heritage districts to one to two storeys and surrounding residential areas to one to 1.5 storeys. The Official Plan also protects the mature urban forest in the towns.

“Elora is under threat,” he said. “We have at least one high-rise building development proposal in the low-rise central business district. We need affordable and attainable housing solutions with heritage protection.”

The historical downtown core of Fergus is similarly under threat, Jackson added.

With the stage set, the microphone went to the candidates.

“We believe local heritage must be respected,” he said adding residential development should be close to public transit lines. “We propose gentle density without changing small-town character.”

NDP candidate Diane Ballantyne said her party’s policy is to build 1.5 million new homes over the next decade, to end exclusionary planning, and to form a new agency called Housing Ontario.

“We would do it without paving over farmland or damaging heritage,” she said.

Stephen Kitras is running for the New Blue Ontario party and it promotes mixed housing developments, with 30 per cent of any development to be attainable housing with a rent to own option.

“Without upward mobility, we’re dooming our children to a life of poverty,” he said. “Our motto is that we stand up for citizens. Anyone that calls you a NIMBY is a bully.”

Takacs, who lives in Vaughan, called it a “concrete world,” and said he was quite taken with the bucolic setting of Centre Wellington.

He reiterated his stance that housing should be constructed near transit and transportation routes and colleges and universities.

“I don’t believe taking farmland is the solution,” he said.

Ballantyne said it’s municipal rules, like setback requirements and zoning restrictions, that are keeping private homeowners from building secondary housing units on their properties. These are options that could increase the housing supply without affecting the look and feel of small towns.

But at the provincial level, “we must ensure we are increasing density when building new” while still protecting heritage buildings, she said.

Kitras said developers are looking for easy home builds and single-family homes are more profitable for them than building attainable homes. So provincial policy would have to change and would change with the New Blue party, he said.

“I’m not against density or high-rises or future development lands,” Kitras said. “But we can’t have Toronto strategies for rural Ontario.”

Kitras is also a Centre Wellington councillor and with that hat on, he said the province has designated growth through its Places to Grow legislation and Wellington County allots that growth to the municipalities.

So it really boils down to who has the wastewater capacity to accommodate growth.

Centre Wellington has the capacity and once Erin’s wastewater treatment plant is complete, it too will have the capacity for growth.

“It may seem that growth is way too rapid, but Fergus and Elora built their wastewater treatment facility and that allows for it,” he said.

Ballantyne, who is also a county councillor, said many of the questions posed by attendees are really municipal matters. But from a provincial perspective, the NDP would increase taxes for land speculators and for homeowners not residing in their homes.

“Building more homes like we have doesn’t address the problem,” she said.

All three candidates saw value in public engagement when it comes to growth and heritage preservation.

Running in the election but not present at this debate are Ted Arnott, for the Conservatives, Ryan Kahro for the Green Party and Ron Patava for the Consensus Ontario Party.