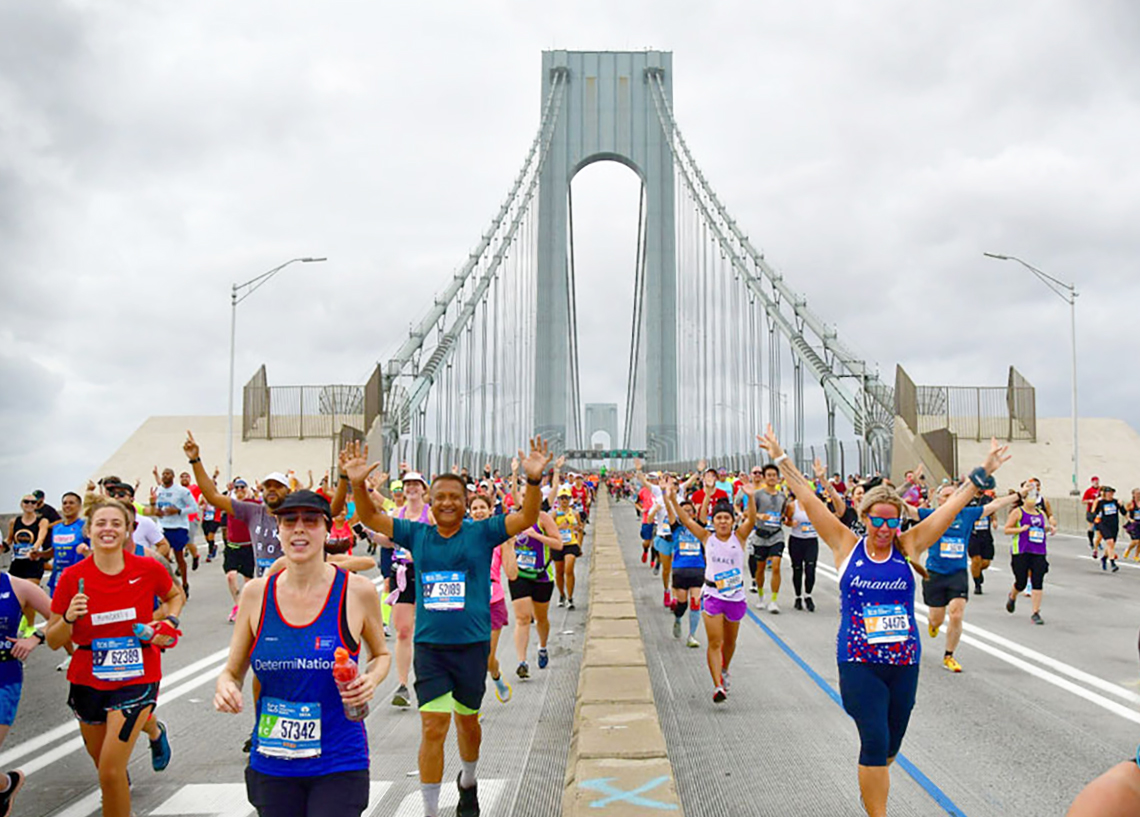 Amanda Bulmer (No. 54476) of Harriston at the New York City Marathon start line on the Verrazzano Bridge which connects Staten Island to Brooklyn. "Running over the bridge was quite calm and quiet, as you started to come off the bridge you could hear the roar and excitement of the spectators," said Bulmer. Submitted photos

HARRISTON – “I still don’t think it has sunk in that I ran the New York City Marathon (NYCM), and in a year that will probably go down in history.”

Those words were from Harriston resident Amanda Bulmer, who participated in the prestigious run through all five NYC boroughs on Nov. 6.

The 2022 run took place under the second hottest conditions in NYCM history, with temperatures of 24 degrees and, at times, 100% humidity.

“Crazy temps for November,” observed Bulmer, noting the race was held under a code yellow, which means “conditions less than ideal.”

The starting wave Bulmer was assigned to took off at 11:30am, which meant running, with thousands of others, through the peak of the heat.

“I tried not to panic, I knew I couldn’t control the weather,” she said.

“We lined up at the start line with emotions at an all-time high.

“The national anthem played, a cannon was fired and New York, New York started to play. It was go time.”

Bulmer, who began running about three years ago out of desire for a healthier lifestyle, was among about 50,000 participants in the marathon, the world’s largest such event in terms of participation.

She was one of 10,000 entrants selected through a random draw system.

Runners can also gain entry by hitting minimum times at qualifying runs, participating in a set number of runs designated by the host New York Road Runners club, or signing up to raise funds for one of the marathon’s partner charities. 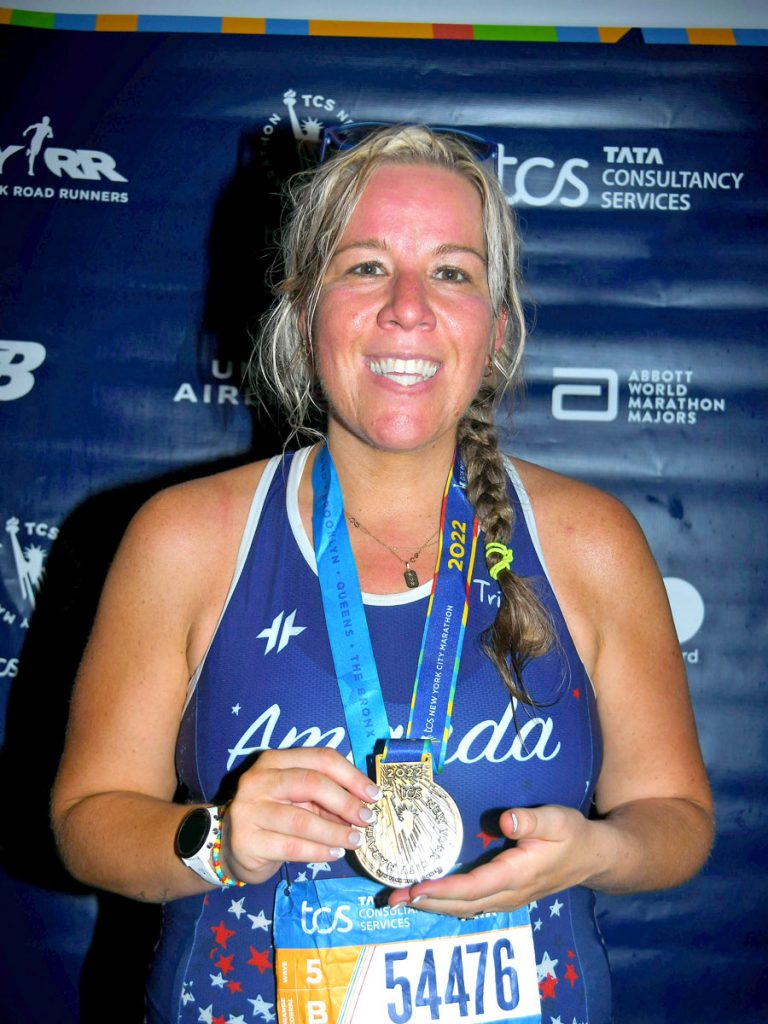 Amanda Bulmer with the medal she received upon completion of the New York City Marathon.

While experiencing the run was her main aim, Bulmer did set a goal for herself in terms of completion time, a target she kept between herself and her running coach in order to minimize pressure.

“I knew by mile six my goal was not going to happen. The heat and humidity were getting to me, along with so many others,” she explained.

After a quick chat with her coach, who offered some extra reassurance and encouragement, Bulmer decided to adjust her pace.

“My priority now was to finish and enjoy every mile. The crowd support was like nothing I have ever seen before,” she stated.

“At times it was over whelming, but the crowd definitely helped carry me through.

“There were full-piece bands, choirs, tons of spectators cheering. Also, the support from family and friends went above and beyond.”

While the conditions proved extremely challenging, Bulmer was determined not to give up.

“I stopped at every water station, grabbed water and electrolytes and grabbed salt and ice when needed.

“It’s unfortunate, but they actually ran out of cups for water so it was being poured in your hands to drink and on your head to cool down,” she said, adding a last-minute decision to buy a hand-held water bottle the night before she left for New York “literally saved me.

“My heart broke for the runners that were not able to finish,” she said of watching some runners collapse or head to the medical tents along the route.

As she neared the finish line, Bulmer realized she was about to join a very select club. 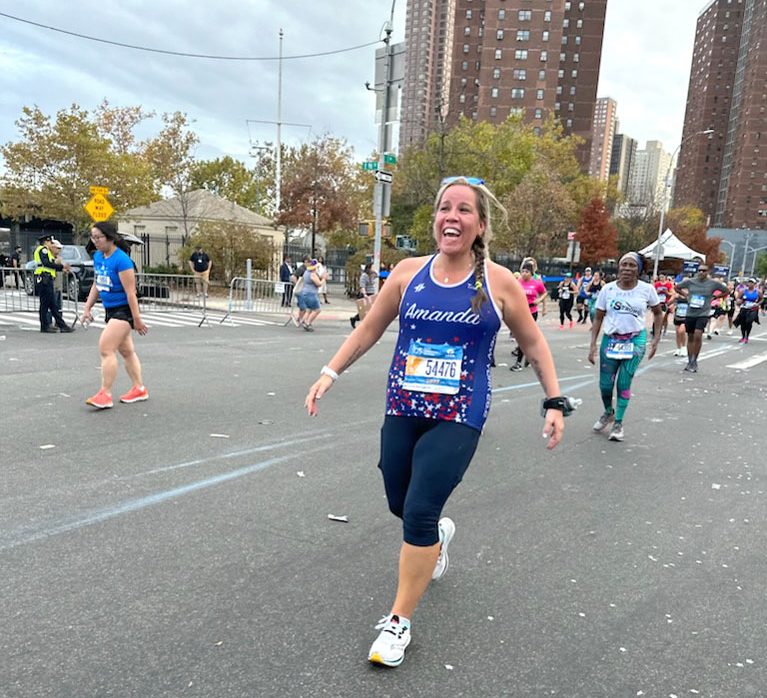 A smiling Amanda Bulmer met up with her running coach in Manhattan, around mile 18 of the New York City Marathon on Nov. 6.

“As I turned into Central Park I knew this was the home stretch, only three miles to go. This part was definitely the hardest. Central Park is rolling hills and it seemed to take forever,” she stated.

“The crowds were unbelievable. With two miles left, I saw my run coach who said to me ‘you’re going to be a marathoner.’

“And in that moment, I knew I was going to finish. The last two miles are still a blur. I don’t remember crossing the finish line.

“Shortly after (passing) the finish line I was handed my medal. I completed the New York City Marathon!”

After a few days of sightseeing with her mother and sister, who accompanied her on the trip, Bulmer returned home with time to reflect on what she had accomplished.

“I’ve had to let go that my finish time wasn’t where I wanted it to be and what I trained for,” said Bulmer.

“I am so proud that I did finish and finished injury free. Less than one per cent of the world’s population has completed a marathon and I am now officially part of that.

“Would I do it again? Absolutely!” she added.