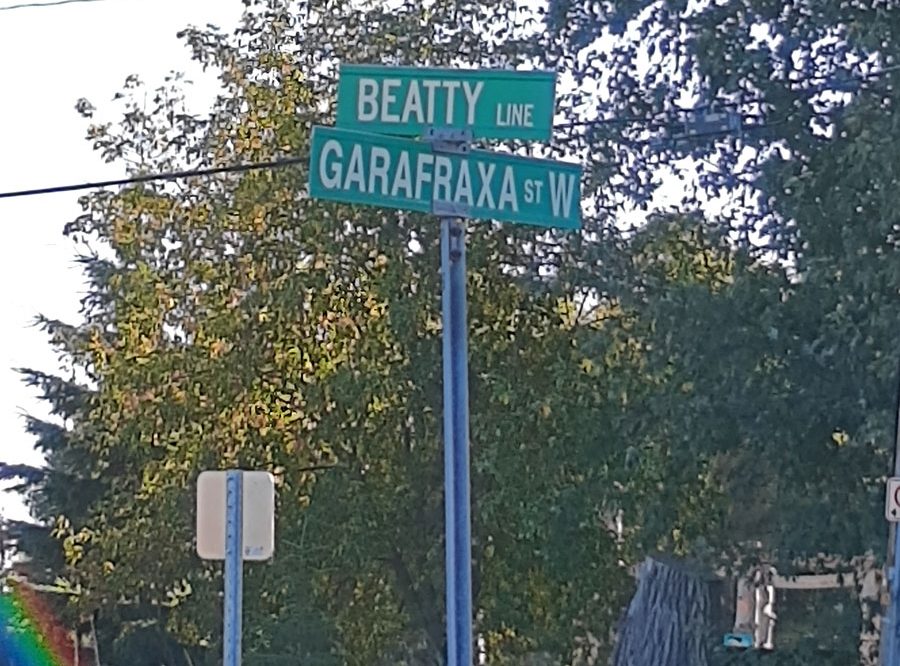 Habitat for Humanity Guelph Wellington is planning two new builds - one at the corner of Garafraxa Street West and Beatty Line in Fergus and the other on Speedvale Avenue in Guelph. Photo by Joanne Shuttleworth

ABOYNE – Habitat for Humanity Guelph Wellington plans on building two new housing complexes – one in Fergus and one in Guelph – and to fund them through its newly launched Community Bonds program.

The agency held a launch event on Sept. 29 at the Wellington County Museum and Archives to explain the bond program and share details of builds.

Habitat is finalizing the details to purchase property at 465 Garafraxa St. W. in Fergus where it plans on building 32 townhouse units with a mix of Habitat and market units.

It has closed on property at 317 Speedvale Ave. in Guelph, where 32 units will be constructed. Again, there will be a mix of Habitat and market sales.

There is already a medical building on the Guelph site and officials will decide as they get deeper into the project if that will be maintained and altered or torn down for the project.

The Guelph property will have underground parking while parking in Fergus will be at grade.

Chief executive officer Steve Howard said Habitat for Humanity plans on including accessibility features so homeowners can age in place.

The two projects are to be completed simultaneously.

While this is exciting news, the agency also announced it is taking a different approach to fundraising with the introduction of Community Bonds.

“It’s a new strategy for financing Habitat builds through community investment, through socially conscious investors who want to make an impact in their community… and will have mutual benefit for Habitat and for people who want to invest in our project,” director of community engagement and development Ryan Deska explained.

“It’s like a GIC or Canada Savings Bond kind of offering with a defined rate of return over the project.”

The bonds are secured against the land and give Habitat the seed money to get started, Deska said.

Minimum investment is $2,500. A variable interest rate will be applied and interest will be paid semi-annually over a three-year term.

“It’s a way to partner with us that’s different from a donation,” Deska said.

“But they are having a huge impact in terms of moving the project forward.”

Deska said Habitat for Humanity will hold monthly webinars for investors, so they know what’s happening with their money. More information can be found at habitatgw.ca/communitybonds.

“These new build projects are within our grasp,” Deska said.

“With the collective support of our communities behind us, we can create a very positive impact in the next three to five years.”

Habitat for Humanity is also ready to take applications for families interested in a home.

There are strict eligibility requirements, including a demonstrated need for decent, affordable housing, the ability to pay a mortgage to a bank, and the willingness to partner with Habitat.

Habitat families are also required to give 500 volunteer hours to the organization. More information can be found at habitatgw.ca/apply.

Deska also lauded the ReStore and its many volunteers.

Funds from the ReStore add stable funding to the organization so they can move forward on housing projects.

“We’ve opened the floodgates and we’re ready to move forward,” he said.