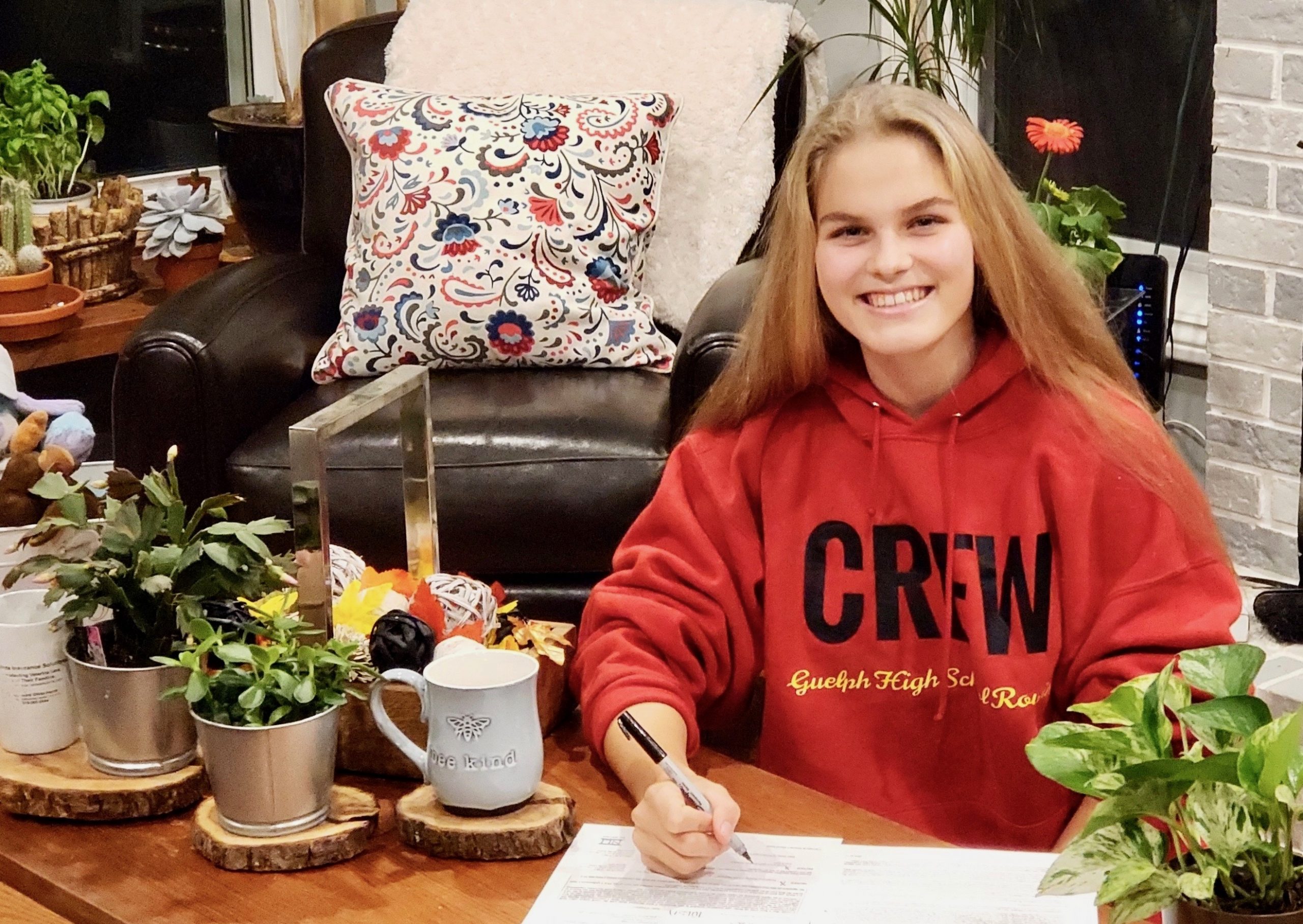 Guelph-Eramosa resident Kristina Harris, 17, has signed a rowing scholarship with the University of Tulsa. Submitted photo

GUELPH-ERAMOSA – A local teen is heading south of the border in September to claim a spot on the University of Tulsa’s rowing team.

Guelph-Eramosa resident Kristina Harris, 17, has been rowing her entire life.

Her parents met while rowing at the University of Western Ontario, so she has been around boats and attended regattas for years

However, it wasn’t until Grade 9 that she began to race competitively.

The Guelph Rowing Club, housed at Guelph Lake Conservation Area, offers a Learn to Row program that students can take in the fall.

“So I helped with that and rowed through that and then the following spring is when we race,” Harris said.

The teen is on the John F. Ross Collegiate Vocational Institute rowing team during the school year as well as the Guelph Rowing Club team in the summer.

“I get the chance to train with the University of Guelph athletes and … we’ll travel for our races and that’s always fun,” she said.

While Harris has competed in most types of rowing, including eights and fours, she prefers to row solo (sculls) or with a partner (double sculls).

Her doubles partner goes to Guelph Collegiate Vocational Institute so during the school year they actually row against each other. 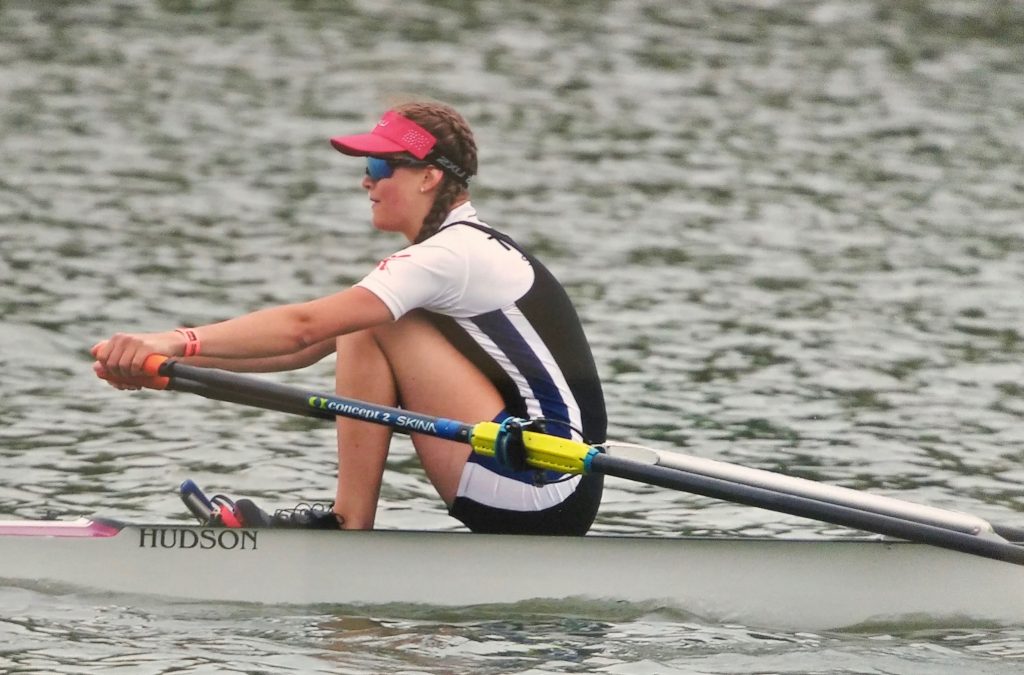 “I think we make each other better,” Harris said. “We train together during the winter and then when races come, we compete.

“It’s nice to have somebody around the same speed as you to push each other … always making each other faster and that makes our boat faster for the summer.”

It was while she and her doubles partner were competing in the Royal Canadian Henley Regatta in 2019 that the University of Tulsa approached Harris.

“We placed second, which was a really big achievement,” Harris said.

“And we had coaches come up from the United States to watch those regattas, looking for potential recruits.”

One of those coaches was from the University of Tulsa and Harris kept in contact throughout Grades 11 and 12.

“Because of COVID there have been some restrictions with NCAA recruiting,” Harris said.

“So things like they weren’t able to meet in person and sometimes they would fly us down for visits and it would be a weekend you’d get to spend with the team, see how they train, what a day in the life of an athlete there is, but I didn’t have the opportunity to do that because of COVID,” she said.

“So I kept in contact with these coaches and then starting in the early summer they were able to start making … scholarship offers for us and after Tulsa made an offer, me and my parents kind of went over and looked at everything and it made the most sense for us.”

She officially signed with the team on Nov. 11 and she will be the only new recruit in September 2021.

“Kristina is a wonderful young sculler … who has impressed us over the last two years,” University of Tulsa rowing head coach Kevin Harris said in the university’s announcement.

“Coach Olivia Staff initially recruited her and I knew the moment I met her that she was someone who would do well at Tulsa. She has a big brain and a big heart, two qualities that we love.”

He continued, “It’s tough that her rowing season was cut short by COVID, because I think she has been really preparing herself to shine in her senior year. Even so, she committed to Tulsa and we are excited to have her.”

Harris was looking to take a different direction than others in her family, who have always rowed at Canadian universities.

She said it was Kevin’s coaching style that made her want to go to Tulsa.

He encourages his athletes to row in doubles and singles, which not a lot of other universities allow, instead focusing on big fleet boats.

“He sees the value of training in small boats,” she said.

“From the side of technique you can improve a lot in the small boats and you can see exactly what you need to do to get better, whereas when you’re in a boat with a lot of other people it can sometimes be hard to pick out what you need to focus on.” 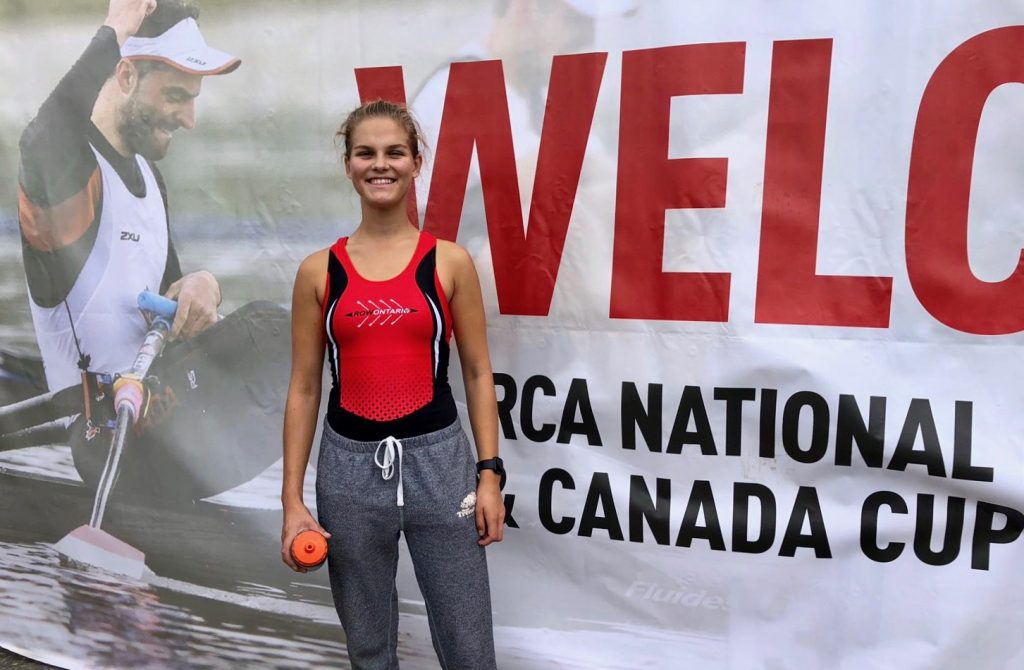 In addition, Harris said Kevin’s team is 50 per cent made up of international athletes.

“A lot of them are from Europe and they compete on their own country’s national team and he has a reputation for supporting international athletes that way,” she said.

“I think being in that environment and just having someone who is willing so support me if I choose to try for the national team, that is important to me,” she said.

However, it wasn’t as easy as signing the recruitment papers; Harris still had to apply and get into the University of Tulsa based on her academics.

She will be studying biochemistry and possibly complete a minor in biomedical engineering.

“With COVID, just kind of seeing everything that’s going on in that strain of science, things like vaccine development and the research, I want to be a part of that,” Harris said.

So far, the plan is for Harris to attend the University of Tulsa in September 2021, “If COVID allows it,” the teen said.

After that, she’s considering the possibility of pursing a spot on the Canadian national team or trying to get to the Olympics.

“I definitely think it’s a possibility and I want to see what rowing at that NCAA level does for me,” she said.