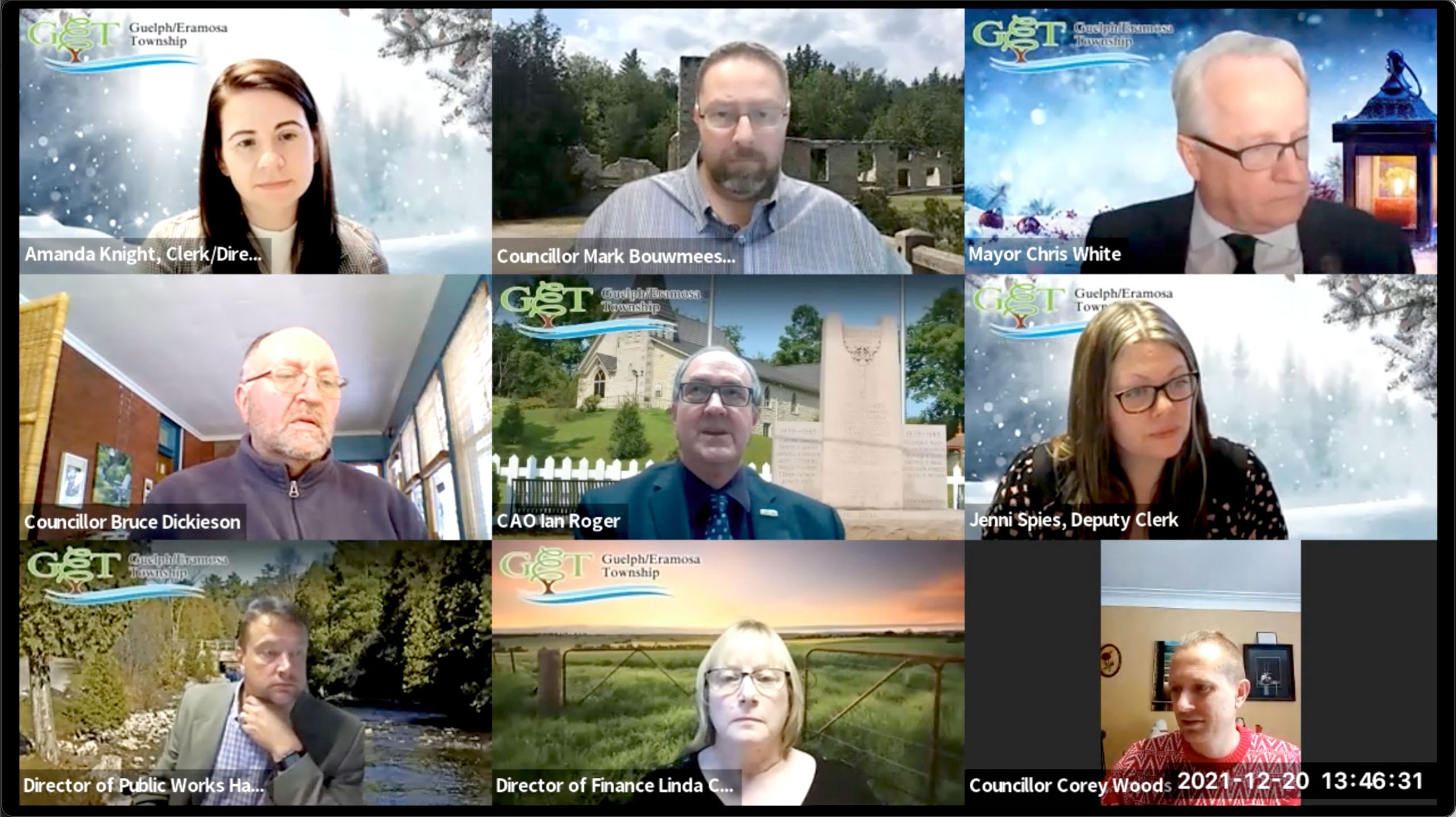 The new fees and charges bylaw will see slightly higher rates for various services across the township. (Screenshot from Dec. 20 meeting)

GUELPH/ERAMOSA – To reflect the current rate of inflation, council here has approved a bylaw that will see slightly higher rates for various services across the township in 2022.

On Dec. 20 council reviewed a report prepared by staff on behalf of the legislative services, public works and parks and recreation departments regarding changes to the township’s fees and charges bylaw.

Staff review fees and charges annually to ensure they are recovering costs for services provided and are in line with council’s strategic priorities, the report noted.

“The biggest change for 2022 is that we will be applying a cost-of-living increase to any applicable fees,” clerk Amanda Knight explained.

The report noted the increase is based on the third-quarter consumer price index.

Fees across each department were altered to reflect the current rate of inflation of 4.4 per cent.

Director of parks and recreation Robin Milne noted department fees went up by the current rate, aside from a few exceptions.

Milne singled out ball diamond lighting as one of those exceptions.

“We were at $7 an hour and when we looked at our hydro bill; we’re doubling it and that still really won’t cover it 100% – we’ll ease into it over the years.”

He added that while the new fee will have a big impact for ball diamond users, “With the old fee, we’d be better off not renting the diamond because we’d be losing money.”

Councillor Corey Woods said if it was him renting out his own equipment he wouldn’t do it at a loss, adding his preference would be to “rip off the Band-Aid” and increase it all at once, as opposed to easing into it.

“If we’re renting it at a loss, why are we even renting it and … parks and rec is significantly down due to COVID,” he noted. “I don’t think we can rent stuff at a loss.”

“There are services we provide where you don’t get full cost [recovery] … and parks and rec tends to be something that’s subsidized a little more.

White added, “I think we’re getting a good balance here.

“Robin sees the gap, he’s trying to close it, it’ll take a bit of time but eventually the fees look like they will cover those costs.”

Later in the council meeting, director of finance Linda Cheyne presented the financial statements for the third quarter of 2021 (ending Sept. 30), which noted the pandemic had a rather large impact on parks and recreation revenue.

“Because of provincially-mandated facility closures and limits to programming, sports fields and recreation facilities, revenue from parks and recreation represents only 36.1% of the total revenue budgeted for 2021,” the report note.

However, the report also explained that with the province opening up more since the end of September, “programming, sports fields and facilities rentals have resumed within the prescribed limits set by the province and by early December revenues have increased to 51% of the total parks and recreation revenues budgeted for 2021.”

Council approved the fees and charges bylaw, which will take effect Jan. 1. To view the full report, visit the township’s website.